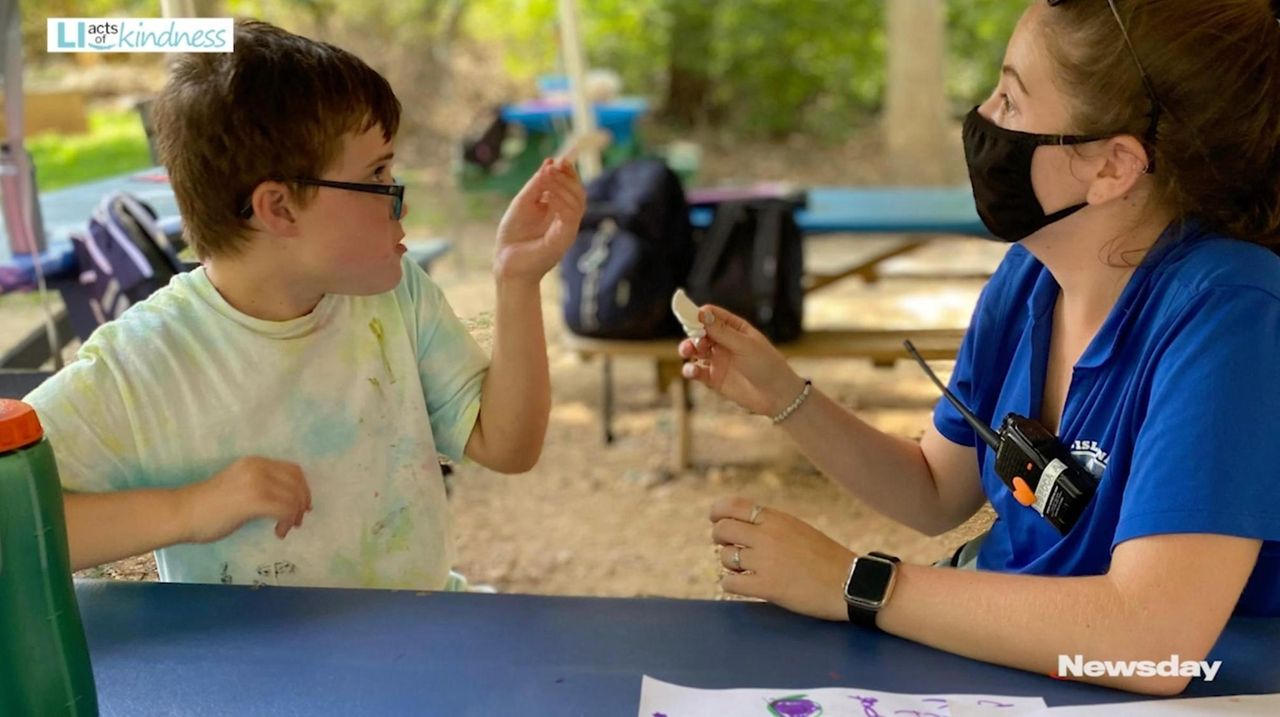 Rebecca Auty, 22, of Merrick, and her client, Shane Gavigan, 11, both had to adjust when their music therapy sessions went virtual amid the pandemic. But something special came out of it: a songwriting breakthrough and a bond that lasted through the summer and beyond. Credit: Rebecca Auty, Jeannie Gavigan

In March, 11-year-old Shane Gavigan’s whole life went virtual — his therapy and speech sessions would now be held on Zoom, and he didn’t understand why.

"You could tell he was angry because he didn't know why these changes happened," said Jeannie Gavigan, his mother. Shane is on the autism spectrum, and she said he would sometimes take out his frustration on the keyboard.

"Instead of having the skills and vocabulary to articulate that, he couldn't, so that anger and frustration came out behaviorally."

But there was a "silver lining," Gavigan said: music therapy.

Shane had been attending music therapy sessions at the Rebecca Center Music Therapy Program at Molloy College since October 2019. John Carpente, founder and executive director of the center, said music therapy fulfills social-emotional goals through activities such as improvisation with instruments or making up songs. The center mostly serves clients with autism.

With music therapy, Gavigan, of Merrick, was happy that her son finally had "his own thing." Shane’s younger brother plays sports and has a group of friends, and Shane has always tagged along with them.

But, "this is the first opportunity he's had in a few years to have his own identity," Gavigan said.

Shane began working with Rebecca Auty, 22, a music therapy student at Molloy, along with a certified music therapist. At first, Auty and Shane’s dynamic was playful. They would sit on the floor together while Auty’s supervisor facilitated the therapy session.

"We bonded through this playful interaction," said Auty, of Merrick. "A lot of the sessions were making up stories and playing different characters. He’s bringing me and my supervisor into this world where I’m his partner."

But Auty said their relationship flourished during the Zoom sessions.

It was challenging getting Shane to focus at first; Auty said sometimes she wasn’t sure if he was looking at her on the screen or browsing the web. But she found a way to engage him through Zoom’s screen-sharing feature.

"I would take over pulling up lyrics to songs that he knows," she said. "We’d be going back and forth and picking different lines to sing, and as we’re doing that, our sessions were starting to change."

Auty said they never did this activity during their sessions in person, but since Shane was engaging, they continued. Eventually, Auty got another idea: she brought a song into the session that Shane liked, and they worked together to write new lyrics for it.

"We were bringing our own language and words to make it our own," she said. "And he was with it the whole time. It was awesome because we were coming from this place where it was so hard having him interact, to now creating this song."

Auty said she doesn't know if this milestone would have happened in person. "In person we had goals, and online we had different goals. This was something that was able to inspire him. It was a great experience."

Gavigan said she saw the benefits of music therapy in her son "immediately." When Shane first started the sessions, he began singing around the house and having conversations with his mother through song. Gavigan still remembers the first time he did it — he sang, "Can I have some dinner please?"

"Music therapy showed us either he’d always loved it or this new experience has given him a love for music," she said.

And when the sessions went remote, Gavigan was able to see other benefits for the first time, as opposed to when she’d take Shane to the Molloy campus in Rockville Centre and wait for him outside the room.

"Whatever he was doing prior, he refocuses and comes to the computer," she said. "You can hear his voice change and watching him, you can see his body relax. His shoulders shrug and his body becomes less tense."

When Auty graduated in June, Gavigan was a little nervous about losing her. About that time, she decided to enroll Shane in the Mid-Island Y JCC Day Camp, held in Wheatley Heights. Shane has been attending the camp for a few summers, and she thought outdoor activities such as zip-lining and swimming would be a welcome change of pace during the COVID-19 quarantine.

Gavigan said, "After the first day, out of nowhere his counselors were like, ‘Rebecca’s here.’ "

It turned out, Auty was working at the camp over the summer. Even though she wasn’t his counselor, they reconnected and she became his ally there. Gavigan said it was "meant to be."

"He had built this trusting relationship with me in music therapy, and it flourished and transitioned to this outside setting," Auty said. "When he was having challenges at camp, I was someone he went to, and I communicated with him in his own language to calm him back down."

Going forward, Auty is planning to organize a music therapy program at the Mid-Island Y JCC in Plainview. Shane is back in school, learning by a mix of remote and in-person classes. Gavigan hopes Auty and Shane can collaborate again, whether in a professional or social setting.

"Having her know him, having that relationship established, it was a blessing that came out nowhere," Gavigan said. "And I’m grateful for that."