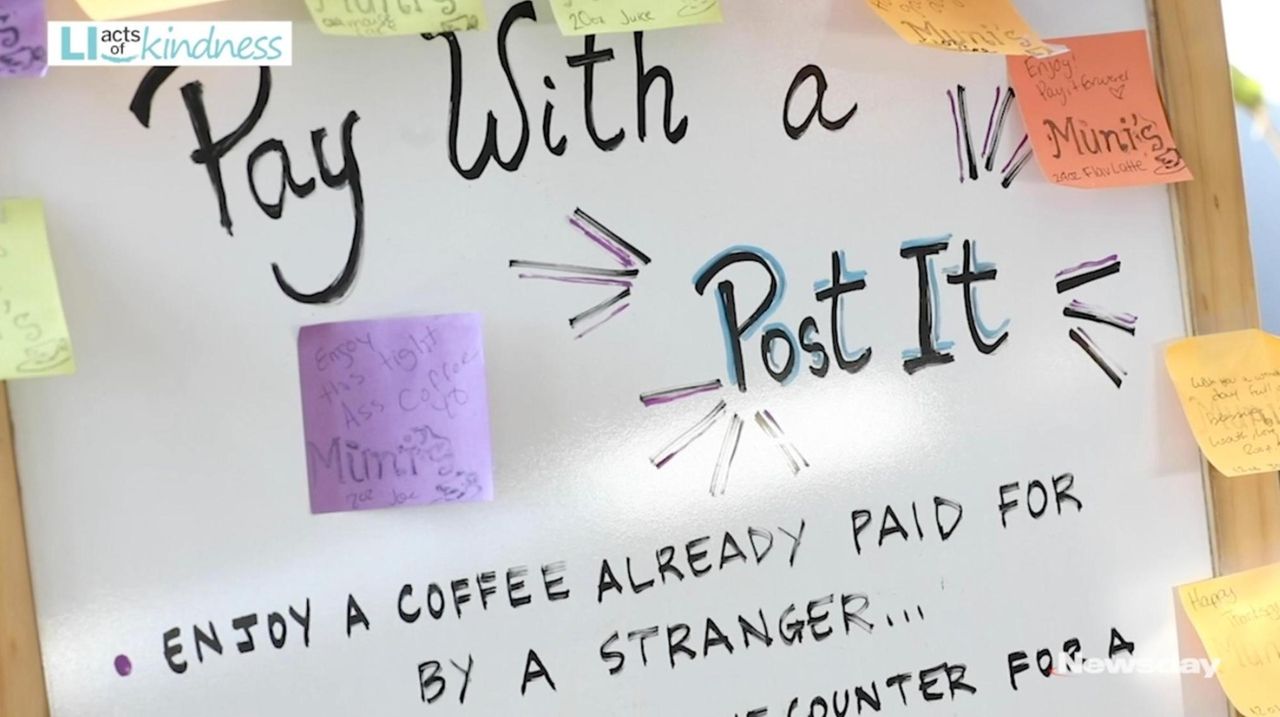 Alice Bopp, the owner of Muni's Coffee Joint in Lindenhurst, started a wall of Post-it notes in her shop in October. Customers can pay for a coffee and then add a note to the wall. Then other customers can take the note to the counter to receive their free drink. Credit: Newsday / Chris Ware

Alice Bopp has fostered a tight-knit community of customers in her Lindenhurst coffee shop. Now, she’s inviting them all to pay it forward — with a Post-it.

Bopp owns Muni’s Coffee Joint, which has been serving fresh brews since March 2019.

Her initiative, which she started last October, is simple: buy a coffee for a stranger, fill out a Post-it note and stick it to the whiteboard by the window.

Then, another customer can redeem the sticky note at the counter for a treat — already paid for.

Customers can write anything they want on their Post-it, and often use the space to leave words of encouragement, such as: "Appreciate the little things," "Spread kindness" and "Pay it forward." Bopp said she’s seen customers take a Post-it to the counter, and then buy another to replace it.

"To see that cycle going is unbelievable," said Bopp, of Lindenhurst. "It’s really touching to see people caring for others."

The idea was kick-started by customers Bopp calls her "community." Several of them reached out to Bopp and Shay McCandless, the manager and barista at Muni’s. Businesses across the country had started similar pay-it-forward projects during the coronavirus pandemic.

"We had a few people tagging us on Facebook here and there," said McCandless, of Lindenhurst. "We figured, why not give it a go? And it’s been so much more successful than we thought it would be."

So far, McCandless said the staff has gone through four stacks of Post-it notes, of all different colors. "The number off the top of my head is maybe 500 [Post-its]; it could be more," she said.

Bopp, who is originally from Rio de Janeiro, Brazil, has always had a passion for coffee. When she moved to Lindenhurst with her husband 11 years ago, she was eager to bring her big-city roots to Wellwood Avenue. Bopp said at the time, "the town was so dead because the economy was so beat up."

"When I decided to open a coffee shop, I was looking forward to pumping things up," Bopp said.

Now, Bopp said she has regular, loyal customers and has made connections with her fellow small-business owners nearby.

"I feel like people feel like our coffee shop is an extension of their house," she said. "We call them by their names. They feel at home."

Julie Catone of Lindenhurst said she’s been a customer at Muni’s since the beginning. Born and raised in the community, she said a coffee shop "was always something Lindenhurst really needed."

"I’m probably there at least once a week, sometimes twice," Catone said.

She hasn’t yet participated in the sticky note project, but keeps a close eye on the whiteboard.

"Every time I go in there, I feel like there are more Post-it notes," Catone said. "It hasn’t slowed down at all since she's started it."

Catone runs a baking business and often drops off treats for the employees of Muni's. Bopp has also encouraged Catone to leave business cards at the counter for customers to grab.

Small businesses on Wellwood have participated in the Post-it project, Bopp said, by buying a coffee and using the sticky note to promote their services.

"Alice is such a compassionate lady that it just made sense for her to do something like this, especially during a pandemic," Catone said. "Times aren't great for any business right now, but she’s still thinking of people other than herself."

McCandless said some people who don’t live close enough to Muni’s have sent her payments via Venmo so they can add a sticky note to the board. And those who live locally have used the notes to write personal words of support.

"We had someone leave a Post-it that said, ‘Take this if you’re struggling at home,’ "" she said. "We had a few people write on Post-its for people recently coming out. It just shows there’s a lot of good people in the community trying to help in the little ways they can right now."

Bopp decided she’s going to stick to this effort, even after Long Island starts returning to a sense of normalcy.

"I don’t see why not," said Bopp. "If there are Post-its there, we can’t just take them away. Somebody’s gotta use it."