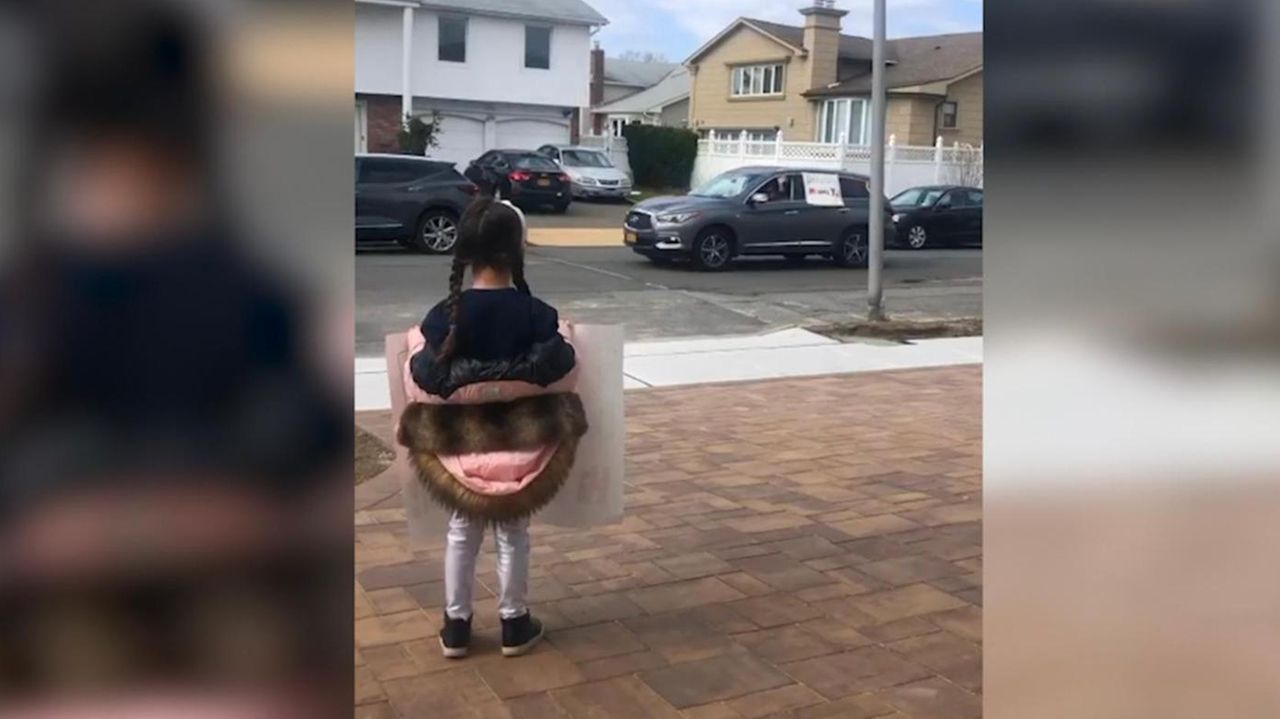 Long Islanders are making their neighborhoods fun from their front lawns in order to continue social distancing. In Massapequa, Gus Kalin played a soulful rendition of "Somewhere Over the Rainbow," and in Bellmore elementary schools organized a "teacher parade" to drive by and say "hello" to their students while schools are closed. Credit: Marshall Rosenblum, Amanda Kalin

Long Islanders are lifting each other’s spirits in their neighborhoods with costumed dance battles in the street, a flugelhorn rendition of “Somewhere Over the Rainbow” and a parade of nearly 100 teachers.

Janet Clifford first brought Boogie Bear to life through bedtime stories she would tell her daughter. Clifford, a special education teaching assistant at Fork Lane Elementary School in Hicksville, would weave tales of a bear with a whole lot of rhythm and big Broadway dreams. Eventually, the North Massapequa resident took her storytelling skills to the next level by purchasing a bear suit and introducing the character to her community: at libraries, fundraisers and schools, Boogie Bear was a guest of honor.

But because of the coronavirus outbreak, “we had to put it on the back burner for a little bit,” said Clifford, 47.

“I just thought it was something to do that was fun,” Clifford said. “My kids were upset they couldn't see their friends, so now they can battle some of their friends and see them from the sidewalk.”

Clifford said Long Islanders come out to their front porches and driveways and dance along with her to pop songs, such as “Happy” by Pharrell Williams. Some people have requested songs and locations for her to visit. So far Clifford has danced throughout Massapequa and Bethpage. Clifford and her friend Cristina Gonzalez had a dance-off recently, with Gonzalez dressed in an inflatable “marshmallow man" costume.

“Everyone stands in front of their homes clapping and waving,” Clifford said. “I’m planning on going to as many houses as I can each day, like three to five each day.”

Meanwhile, in Massapequa, Gus Kalin performed his flugelhorn outside his home Saturday, drawing in an eager audience. He played a soulful rendition of “Somewhere Over the Rainbow” for his family and neighbors, and was met with applause from all over the block.

Kalin, 59, has been playing his instrument, which resembles a trumpet, since he was in fourth grade. Kalin is a deputy commanding officer in the second precinct of the Nassau County Police Department. He’s the leader of the police department’s Blue Lion Band.

“It was a beautiful night, the sun was setting, there wasn’t a breeze in the air and I figured I’d go out and play a beautiful song to get us through these tough times,” Kalin said. It was also his daughter-in-law Amanda Kalin’s birthday, so the song was a gift to her, as well. She filmed the performance on her phone and posted it on Facebook, where it’s garnered nearly 10,000 views.

Kalin said the sound of his flugelhorn traveled far and wide that night, even reaching the playground of a nearby elementary school a few blocks away. He said he’s already gotten some song requests, so Kalin will return to the stage that’s become his front lawn to play “Amazing Grace” and “What a Wonderful World” by Louis Armstrong — a personal favorite.

In Bellmore, elementary school teachers decided that even though learning is taking place online and at home for now, they wanted to say “hello” to their students by organizing a parade in their community. Almost 100 cars cruised through Bellmore in a single file on Sunday, with teachers waving out their windows as students watched from sidewalks.

“The teachers are dedicated and the parents are rock stars,” he said. “I can’t say enough about the dedication that they have for our community in Bellmore.”

Randi Rosenblum’s daughter, Macie, is a first-grader in the district, and they went outside to watch the parade together. Rosenblum said a lot of the teachers recognized her daughter, yelling “Hi Macie!” and waving from their cars.

“She was so excited,” Rosenblum said. “It was so nice for her to be able to see her teacher. It gave her a little normalcy and it was really nice for her to see everyone was OK.”