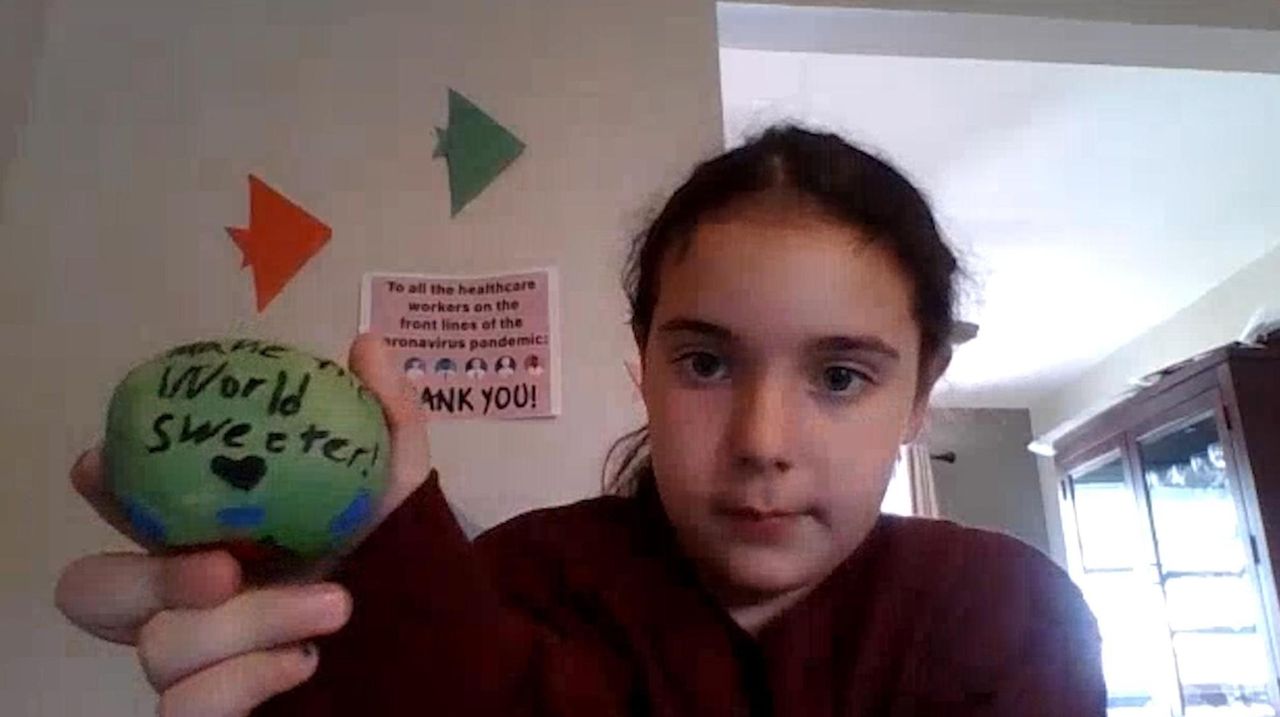 Lily Ercegovic and Giuliana Guzman, students at New Hyde Park Road School, on Tuesday talked with Newsday's Rachel Weiss about how they painted rocks and sold them to earn money to buy food to donate to a hospital — an especially important cause because Giuliana's grandfather has COVID-19. Credit: Newsday / Jessica Kelley

When the New Hyde Park Road School teacher parade came to town on April 4, three students created something special for their educators — while also paying it forward to doctors and nurses.

Giuliana Guzman, Peyton Eckman and Lily Ercegovic, all 8 years old, decided to paint and draw smiley faces, hearts, rainbows and words of encouragement on rocks, and sold them during the teacher parade.

“Because of the whole thing that’s going on, I feel like messages will make people feel happier,” said Lily. “We decided to sell rocks with cool messages on them.”

Lily said the rocks were part of a set that she already had at home. She painted one and wrote the word “smile” on it. Giuliana painted a rock to look like a watermelon with the words: “Make the world sweeter!” (She also created an extra-special one for her dad: royal blue with the New York Mets logo.)

The girls sold the rocks at the corner of their block during the parade, and handed some personalized rocks to their teachers as they passed by. They stood with a handwritten sign, indicating that the money raised was for a good cause.

“Some people didn’t even buy any,” Giuliana said. “They just donated.”

The girls agreed that seeing their teachers in person made them happy. In total, they raised $209 and donated that to Cara Mia Due, an Italian restaurant in Seaford. Giuliana’s mother, Rosy Guzman, added $91 of her own to make it an even $300.

“We have a full crew and everyone's working,” said DeCiantis, who has been running the restaurant for 14 years. He said his staff will be cooking chicken scarpariello, rigatoni with bolognese sauce, vegetables, eggplant rollatini and a cannoli platter.

In the meantime, the girls have been busy with schoolwork and Lily says she’s also been painting rocks at home, just for fun.

“We’ve been going on walks and bike rides,” said Giuliana. “One or two times we went on a walk and hid some rocks [in our neighborhood].”

In addition to the sentiments they wrote, the girls have one more message for people working in hospitals at this time.

Lily said, “I would say thank you for all you’ve been doing and staying in the hospital to help people.”