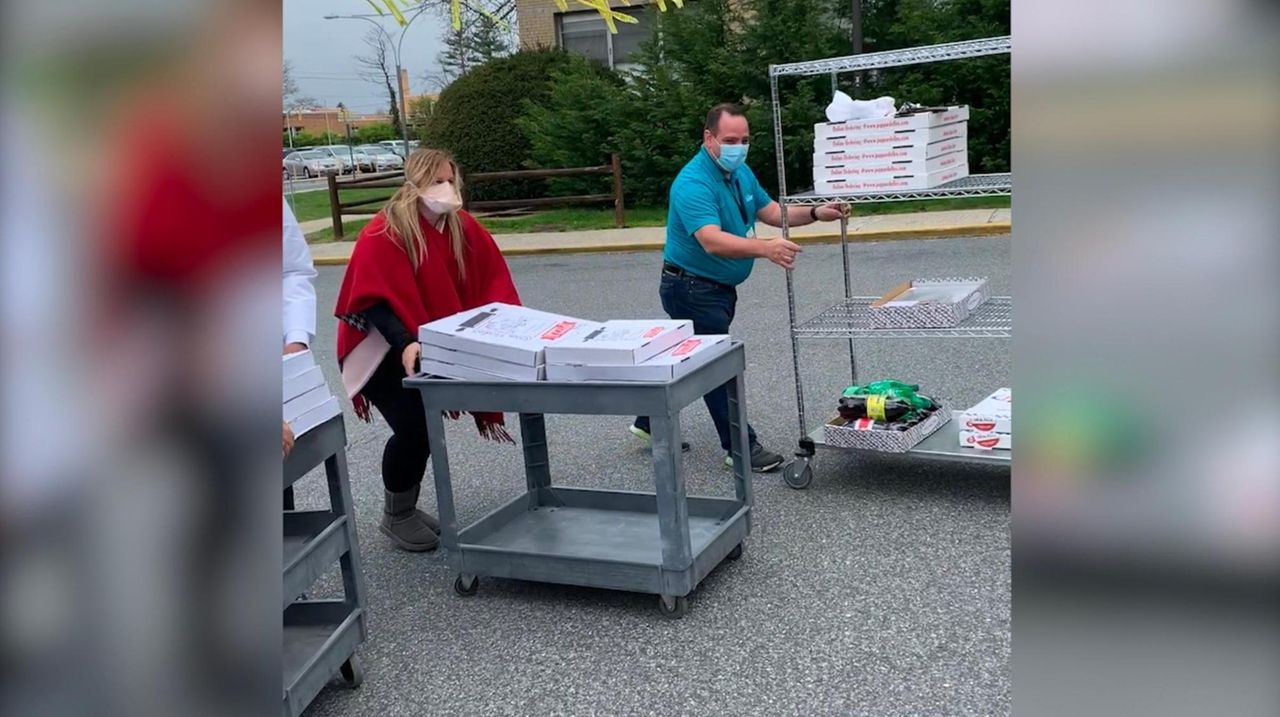 More than 300 restaurants have stepped up to the plate to donate takeout-style meals every day for Nassau University Medical Center workers during the coronavirus pandemic.

The hospital started by reaching out to local restaurants through social media about donating food to the various departments. It did not take long, however, for many Nassau County businesses to jump to the rescue.

“We didn’t really have to ask too much because they started contacting us,” said Megan Ryan, executive vice president for legal affairs and general counsel at Nassau Healthcare Corporation, who has played a key role in the constant flow of deliveries to the hospital.

Ryan and her team have been working closely together to make sure all hospital departments and shifts are covered for breakfast, lunch and dinner.

“I would say we’re at least 500 donations since March, which is just amazing,” Ryan said. At least 350 restaurants have participated in the food giveaway, she added.

As for the process of the food deliveries, Ryan compares it to restaurant curbside takeout. Rain or shine, the food donors will select a date and time to meet with Ryan and the hospital’s head housekeeper outside the building’s Carman Avenue entrance.

Many safety precautions are taken during deliveries. For example, if bagels are not individually wrapped, the hospital will not accept them. “We try to do boxed lunches and meals to lessen any handling,” Ryan said. Additionally, items such as soda bottles are wiped down before consuming. “We’ve always insisted that everyone wear the masks, whether you’re delivering food or an employee,” Ryan said. ”We’ll load the food, take it inside, and distribute it so the delivery people are never coming in the hospital.”

NUMC has made efforts to cater to special dietary needs such as gluten-free, kosher, vegetarian and vegan. They have also tried to include a range of cuisine such as Haitian, Indian and Italian.

Mille Grazie Pizzeria in East Meadow is one of many local establishments that has volunteered to give back to the community and the hospital. Owner Jonathan “Jono” Aronson partnered with The Seasons, a 55-and-over community, to donate food to NUMC. “We’re all trying to get through this together,” Aronson said.

Getting involved in this cause is not only limited to business owners, however. According to Ryan, there are also three drop box locations: The Colony Diner, Turnpike Bagels and Ginos of Seaford, where the public can drop off supplies, such as cases of water and masks.

From local companies, including La Novella and Gino’s of Seaford, to bigger chains, such as BJ’s and Entenmann’s, all have been joining together for one cause: helping out the community. "Nestle came in twice and donated thousands of bottles of water that they gave to every floor of the hospital, nursing home and jail," Ryan said.

"Garden Social Beer Garden and Kitchen, which is currently closed, opened up one day just to send 350 meals to the nursing and emergency department," she said.

Even car clubs, such as the Long Island car club, Mercedes-Benz car club, and BMW car club have been sending in 200 individually wrapped bagel breakfast donations for two weeks.

Through all this, NUMC's employees are more than grateful for the generous daily donations.

“The staff response has been very positive,” Ryan said. “We’re going to keep it going as much as possible.”

Christmas party pop-up bars open on LI this season
5 ways to enjoy the return of the Dickens Festival in Port Jefferson
1:47
LI artists find splendor in the glass
Marilyn Monroe-themed eatery replaces longtime Italian spot
These cooking classes will take you around the world without leaving LI
Igloos, holiday pop-ups and more: Your guide to winter dining on LI
Didn’t find what you were looking for?