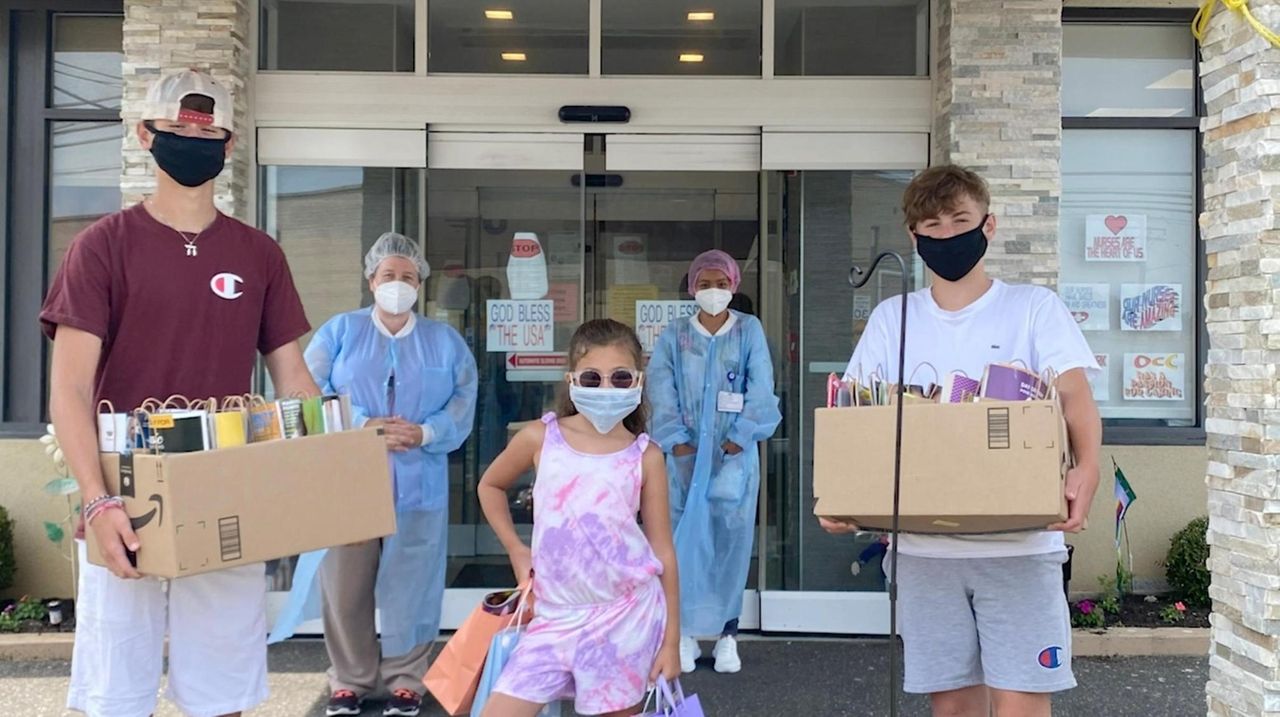 The Cohen siblings, of Oceanside, love spending time with their grandmother — they play cards together and challenge each other with word searches and crossword puzzles.

When the pandemic began, the family realized they had to take a break from their fun and games, for grandma’s own good. Anne Cohen, who lives in Rockville Centre, is only able to stay connected to her grandchildren through their daily FaceTime sessions and phone calls.

So Jake, 16, Jesse, 13, and Sami, 9, came up with a plan to make sure their grandmother knows she is loved, and to also spread some cheer to senior citizens in similar situations.

“Towards the beginning of the pandemic, we were dropping off cards and food to our grandma,” Jake said. “And we were sad to see some of these people in nursing homes, they weren't able to get those deliveries from their family members.

“So we thought that if we could put some boxes together just to put a smile on their face, it would go a long way for them.”

Their grandmother doesn’t live in a nursing home, but the kids’ hearts went out to other senior citizens who have visitation restrictions where they live.

The siblings had a brainstorming session, Jake said, and they came up with “happy packs.” They put together care packages for the elderly, filled with the games and activities they’d normally be doing with their grandmother.

“We put in magazines and games, like cards, Uno, dominoes and crossword puzzles,” said Jesse. Jake added that they also threw in some essentials such as ChapStick, hairbrushes and mirrors.

The name "happy packs" was Sami's idea. In addition, she assembled a little team to help with the efforts.

The kids put together more than 50 care packages, using Amazon gift cards they received as gifts from their grandmother to buy some of the goodies. Their mother, Debi Cohen, also posted about the effort in an Oceanside moms Facebook group, and many mothers donated their own supplies.

“It was just really great seeing the community come together for such a good thing,” Jake said.

On Wednesday, the children headed to Oceanside Care Center with boxes of “happy packs.” Jake said the response from senior citizens and staff alike was pure joy.

“The director of activities was sending pictures to our mom, and all the residents looked really happy,” he said.

Jesse empathizes with all of the residents there who haven’t had visitors since the pandemic began.

“We saw how much our grandma missed us,” Jesse said. “We all would get upset if we didn't talk for a while, so I can’t even imagine what [the residents] would think not talking to anyone for even longer.”

Jake said they’d like to expand their “happy pack” project in the future, maybe even beyond the pandemic. He said the staff told him that even under normal circumstances, some of the residents at Oceanside Care Center are isolated because they don’t have any relatives.

“At some point we’d all like to get to some other nursing homes, because just one isn't enough,” he said. “There are so many nursing homes and so many residents who don't have family members, and we’d like to reach out to as many as possible.”

The kids mentioned that they’ve dropped off plenty of “happy packs” to their grandmother, even though they’re still keeping a safe, social distance.

“Our grandma was the real inspiration for this whole thing,” said Jesse. “She’s always so giving, and we just wanted to take after her.”