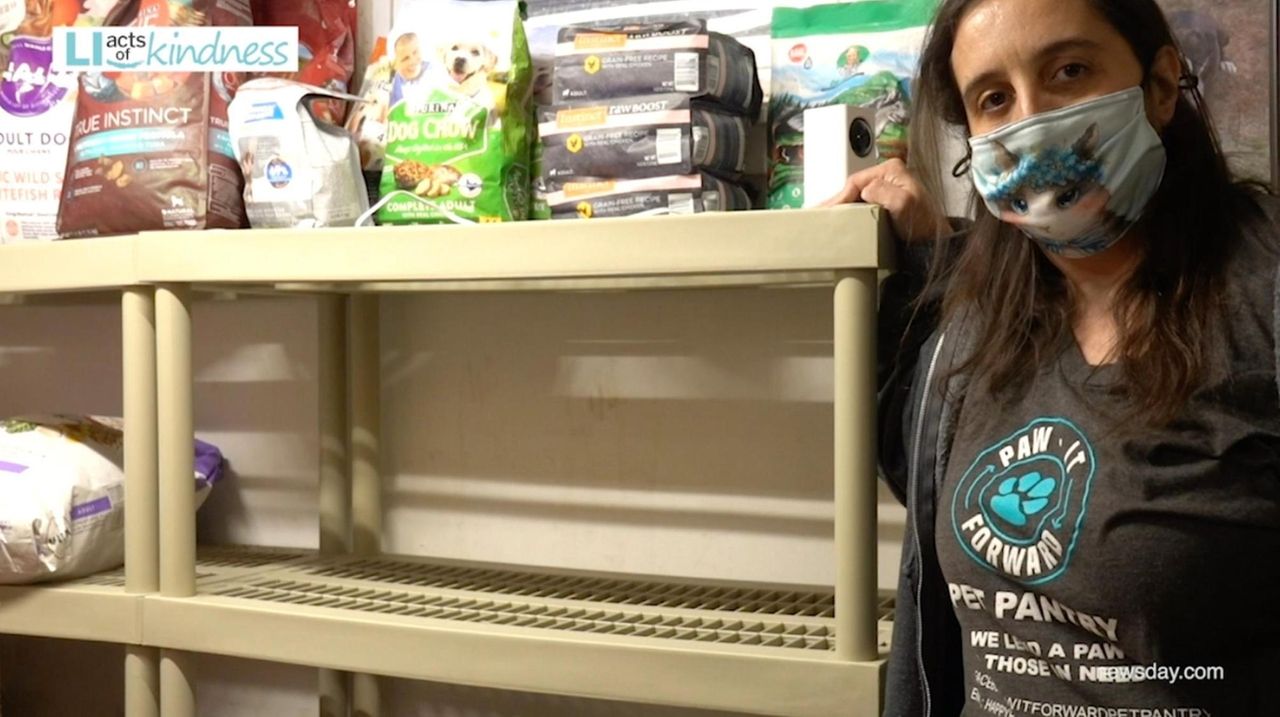 About four years ago, Danielle Scala-Nathan and her husband, Rob, turned their basement in Valley Stream into a pet pantry. They collected and distributed pet food and supplies with a focus on hurricane victims.

Scala-Nathan first recognized this need in the aftermath of Hurricanes Harvey, Irma and Maria.

Now, even while coping with the losses of two loved ones, Scala-Nathan said she's found the ambition to keep the pantry, which they dubbed Paw It Forward, going.

The couple first met at the ice rink in the Parkwood Sports Complex in Great Neck. He was there to watch a hockey game, and she was the scorekeeper. Both were passionate about animals, and adopted two dogs when they got married and moved to Valley Stream.

When the coronavirus pandemic began in March, they knew pet owners would need their help again, this time on a local level. That month, covered in personal protective equipment, Scala-Nathan picked up donations of pet food in Queens with volunteers.

"There was such a calling," she said. "People needed supplies in the first week or two of COVID, so I was still going out physically and getting the stuff."

But then Scala-Nathan faced her own hardship: In April, a few days after their 15th wedding anniversary, Rob died from COVID-19. Scala-Nathan isn’t sure how he contracted it. She's also never tested positive for it.

"My husband always said, ‘Paw It Forward is my baby,’ " she said. "He was always helping physically when he could, and always had my back on it."

In the face of tragedy, Scala-Nathan said she’s continued Paw It Forward for three reasons: her daughter, her dogs and herself.

"It’s still hard every day, but doing the pantry is what keeps me going every day," she said.

Scala-Nathan also lost her mother in September. She said it wasn’t COVID-related, and very sudden. She feels motivated to help others in need, particularly animal lovers like herself.

"After the loss of my husband, I got to meet a lot of new people involved in Paw It Forward now, who heard our story and wanted to help," she said.

Scala-Nathan works with supply distributors, pet stores and local veterinarians, and they also rely on donations from Long Islanders. Anyone in need can schedule a curbside pickup of pet food and supplies with Scala-Nathan, or make a food or supply donation.

Paw It Forward doesn’t just focus on dogs — the pantry accepts food for cats, rabbits, birds and fish. The biggest need right now is for cat supplies, including litter and food, Scala-Nathan said.

Overall, she said the pantry is at its lowest supply since they started it years ago. Scala-Nathan attributes this to the pandemic, but she isn’t giving up. She has a steady team of volunteers (whom she calls "charitable friends") and she receives plenty of support from local animal shelters, who often give her excess food and supplies that are donated. Scala-Nathan also has an Amazon wish list, where people can buy and ship the supplies she needs, right to the pantry.

"A lot of people played a big part in getting the pantry here today," she said. "It’s amazing how everybody helps each other."

Nancy Pabon of Bellerose has been lending a hand to Paw It Forward since 2016. She also co-runs Long Road Home Rescue, Inc. in Manhasset. She helps Scala-Nathan by picking up donations in her van, driving them to Valley Stream, and helping unpack and sort everything.

"Everything we do benefits our community," Pabon said. "People don’t want to abandon their pets. They’ll feed their animals before they feed themselves. So if we can help at all in any way, that’s what we do."

Scala-Nathan said as long as the donations keep coming, Paw It Forward will keep helping pet owners in need.

"I love doing it," Scala-Nathan said. "It’s really what I have going on right now. Losing Rob and then my mom, it's good to keep things going the way it is. I don’t ever see myself stopping."