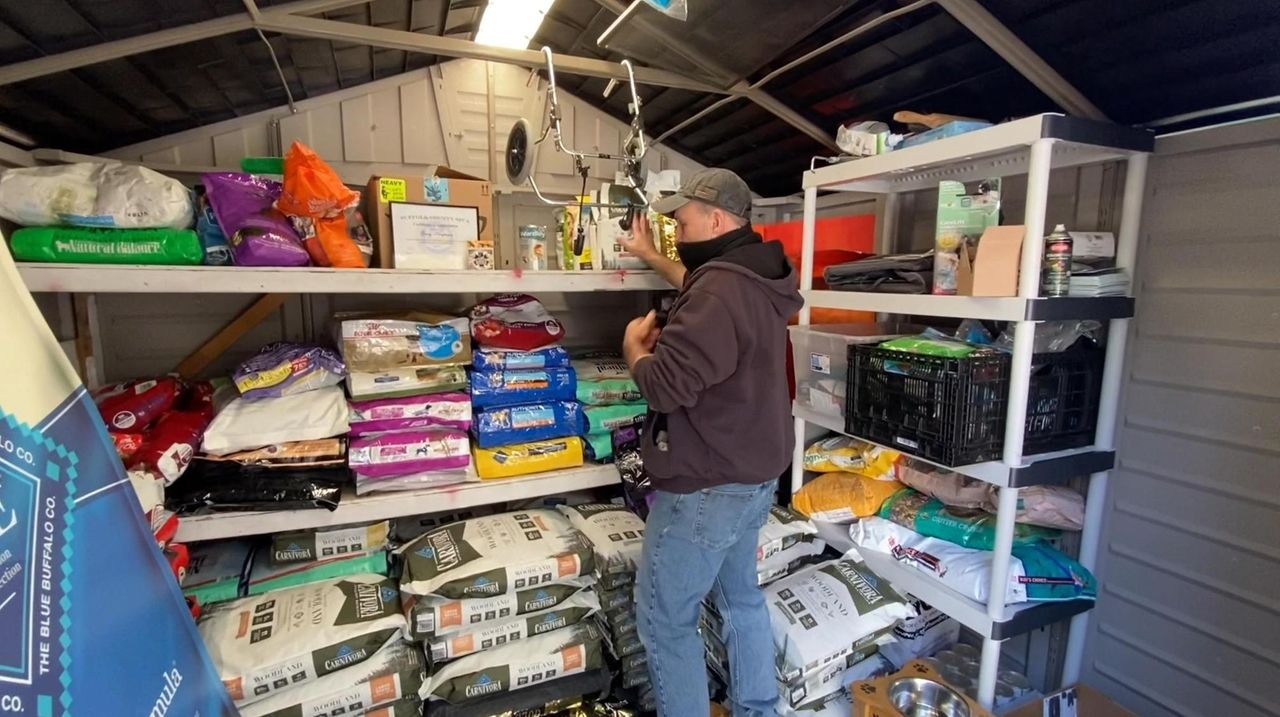 Gary Kaufman started Nobody Starves on Long Island in 2016 and has been providing pet food and medical care to those struggling to care for their dogs and cats during the pandemic. Credit: Newsday / Howard Schnapp

When Gary Kaufman was just a kid growing up in Queens, he used to sneak food out from the refrigerator to feed stray dogs and cats around his neighborhood.

He still does this now — he just doesn’t have to sneak around anymore.

Kaufman’s nonprofit organization, Nobody Starves on Long Island, was founded in 2016, but he’s been passionate about helping animals for as long as he can remember. After superstorm Sandy, he volunteered to deliver pet food to people in need through the Town of Hempstead Animal Shelter, and that work “exploded” into him creating his own organization, he says.

“Sometimes people have no help, they have kids and everything else,” Kaufman said. “It’s just a good feeling, I love doing this.”

In addition, Kaufman lives on 2 acres and has an animal shelter attached to his home, where he cares for dogs while trying to find them homes. The space has heated floors, air conditioning and a television, he says.

If someone in need of pet food reaches out to Kaufman, he’ll ask about the size, age and any allergies that person's dog or cat might have to determine the best food to provide.

“Some of these people don’t realize what they're feeding their dogs,” he said.

From there, Kaufman has volunteers buy the food from pet supply stores and they drop it off at his Middle Island home. He also works with Island Harvest Food Bank — he takes its produce that's about to be thrown away after reaching peak age because he says it can still be given to farm and wildlife sanctuaries. Kaufman also makes sure to take any pumpkin the bank is discarded, noting that it’s great for a dog’s diet.

Kaufman spreads everything out on his driveway and lets Long Islanders know what kind of food he has, and how much, via Facebook videos and photos. His page, “Nobody Starves on Long Island ‘We Can Feed Them All’ ”, has more than 7,400 followers.

He also leads fundraisers on his page for people in need of medical assistance for their pets — and when he can, he helps pay for veterinarian appointments and surgeries.

When he isn’t helping animals in need, Kaufman is a machinist for the Long Island Rail Road. He’s been doing this work for 12 years. “My flexibility with my job schedule and how I work allows me to do what I'm doing,” he said.

Kaufman encourages Long Islanders to pick up pet food from his house “as much as they can.” He also accepts donations for anyone who can contribute pet food or supplies.