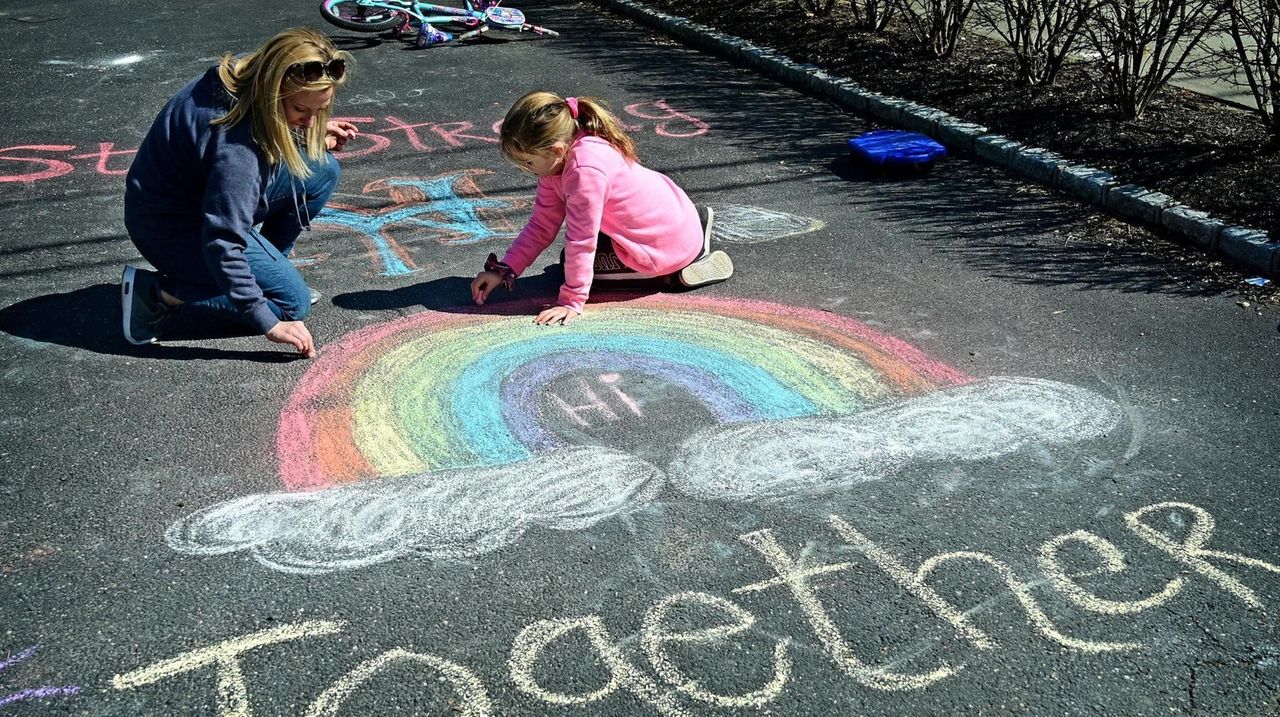 Anna Weir and her mom Melissa of West Islip took part in the Chalk the Walk movement on Sunday, March 22. Credit: Newsday / Thomas A. Ferrara

Rainbows — symbolizing peace and serenity, hope and promise, and endurance in hard times — are springing up in neighborhoods throughout Long Island in an effort to color the road ahead with optimism.

The campaign, “Rainbows Over Nassau and Suffolk Counties and Beyond," started March 21 and spread through a Facebook group. It's among others worldwide that encourage participants to make rainbows to display outside their homes, anywhere from their front windows and doors to lawns and sidewalks. It follows another similar project, “Chalk Your Walk,” which promotes writing hopeful messages in chalk on driveways and sidewalks.

Marissa Stissi’s two daughters, Khloe and Lily, both 10, made rainbows to hang in the front window of their Bethpage house along with their younger sister, Gianna, 3; and the two older siblings also wrote positive chalk messages outside. “We can get through this,” Lily wrote. “Stay positive,” was Khloe’s message.

“We want to help our friends feel better” as they pass by the house and others while everyone is social distancing, Lily says of the rainbow and chalk projects. “It makes you feel connected with your friends.”

The organizer of the rainbow Facebook group, Katherine Schilling, 53, of Wantagh, says on the social media page that making rainbows is something positive, safe and productive that both children and adults spending a large amount of unanticipated time at home could do.

“Put a rainbow in your window … That’s it!” she writes. “Color it, paint it, cut it out, print it from the printer, whatever.”

Then, Schilling says, the fun can come from passersby doing a “rainbow hunt” through the neighborhoods to see how many they can count. “It’s easy. No human contact. Get fresh air. Make a rainbow and then hunt for others.”

Scores of rainbow images have since been posted to the Facebook page, ranging from signs of hope made in rainbow colors to rainbow hearts, flowers, knitted post lamp wraps, paper “curtains” and chains, sea horses, balloons and more. In addition to making a sign that hangs in a window of her house that reads, “Mailman: Stay healthy, you got this!” 11-year-old Emmersen Ortolani posted a video of herself singing, “Somewhere Over the Rainbow.”

One of the most popular posts is a photograph of the outside of a Yaphank house with different areas of the porch each lit in one color of a rainbow. Amanda Hora McCann, 38, of Yaphank, says that by early Tuesday morning it had received over 1,200 likes. The lights were the idea of her husband, Shane, 40, who recently built the porch.

Her children, Noreen, 7, and Decklan, 6, have also enjoyed driving around and seeing how others in their neighborhood did their rainbows. “We’ve driven around and gone down a couple of side roads and one [of her children] will look out one window and point out a rainbow on one side, and the other will look out and point out a rainbow on the other side. They look really excited and scream and want to get out for a closer look.”

Both Noreen and Decklan agree the rainbows have helped make a difference in their mood in what they say is a "sad" time.

“To me, they look like happiness and hope,” Noreen says of the rainbows. Decklan adds, “I like the colors, but I wish I was back in school and I wish this [virus] never happened.”