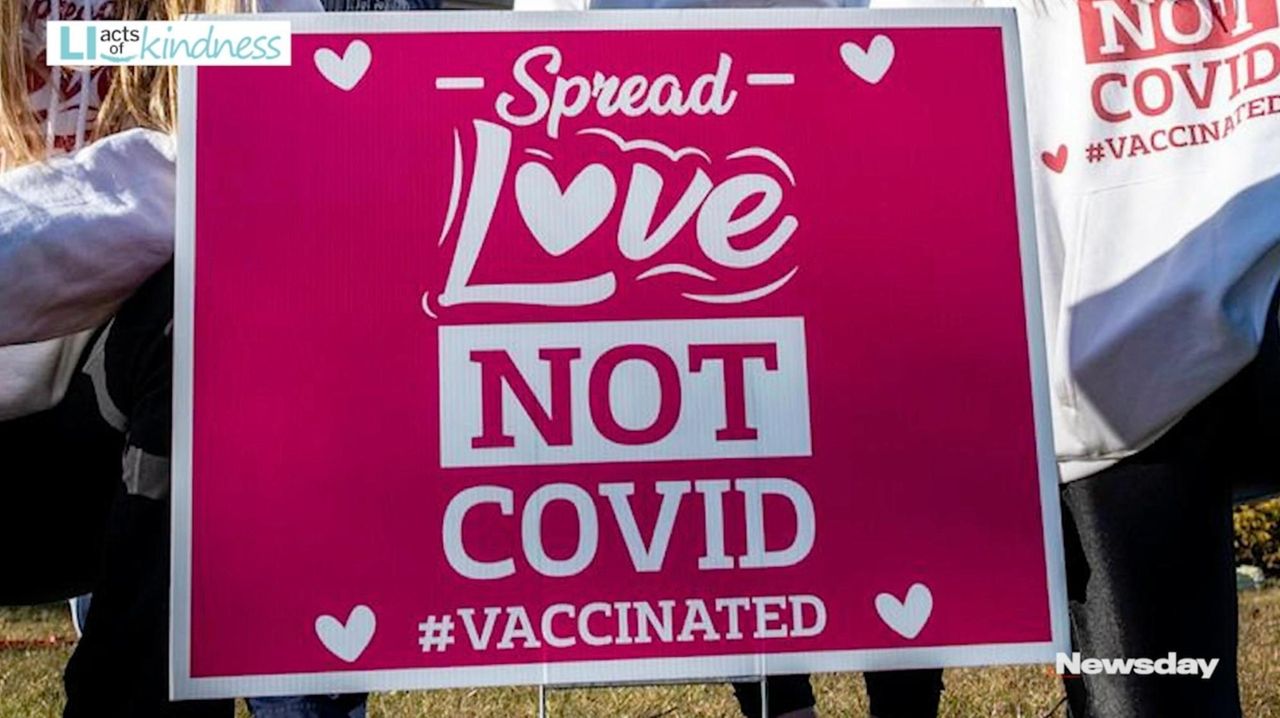 Four teenagers are spreading love from Nassau to Suffolk with lawn signs — for a good cause.

It all started last month — Julianna Bivona, Morgan Harloff and Avery Testa were chatting one night after soccer practice with their mothers. The girls grew up together in Rockville Centre and have been friends for years, said Julianna’s mother, Carolyn Bivona.

"We really missed how we used to do community service before the pandemic," said Julianna, 14. "We started thinking about what we could do for the community and who’s been the most impacted by the pandemic, and we thought about education."

Then, Carolyn Bivona remembered a fundraiser in Rockville Centre that took place at the beginning of the coronavirus outbreak, involving signs people displayed on their lawns thanking front line workers, for them to see on their way to work.

The group decided to run with this idea. They worked with a graphic design company in Lynbrook to bring their vision to life: a magenta-colored sign with splashy white letters that read, "Spread Love, not COVID." The money raised from the signs will go to the Hempstead Scholarship Fund.

At first, Bivona ordered 200 signs to sell. They’ve now sold all of those signs and then some — she said she’s now ordering them in increments of 50.

Bivona was hoping the teens’ efforts would spread some positivity in her neighborhood.

"When people are hurting, the community reaches out and they help," she said.

But after Julianna and her brother, James Bivona, started spreading the word on social media, the interest in the lawn signs expanded far beyond Rockville Centre. Carolyn Bivona said she’s been driving "all over Long Island" to deliver the signs, from Merrick to Farmingville.

"I’ve delivered a lot with my mom throughout the week," said James, 16. The students place the signs on each Long Islander’s lawn.

That’s been a little challenging with the recent wintry weather.

"It was really cold out and it was hard to get the signs in the ground," Julianna said.

At the bottom of the sign is a line that reads "#Vaccinated," which Carolyn Bivona said is meant to raise awareness about the COVID-19 vaccine.

"They wanted to bring awareness to the vaccine for people who want it, they’re not necessarily pushing people to get it," she said.

This is especially important to some of the students in the group. Morgan, 14, has a few healthcare workers in her family. That includes her mother, a nurse at NYU Langone Hospital — Long Island in Mineola. James and Julianna’s father is an internal medicine physician.

"We want to make sure everyone’s able to get [the vaccine] if they want it," said Avery, 14.

And their message is spreading all over the Island. Avery said she’s traveled from Rockville Centre to Westhampton to deliver a lawn sign. A few weeks ago, Julianna dropped off a sign in Farmingdale on her way to soccer practice in Copiague. Her mom said they’re mailing a sign to someone in New Jersey.

Proceeds from the lawn signs will benefit local causes. They’ve already made a donation to the food pantry at the Martin Luther King Jr. Center in Rockville Centre. The rest of the money raised will go to the Hempstead Scholarship Fund, an effort facilitated by William Johnson, state monitor for the Hempstead school district and former longtime superintendent of the Rockville Centre school district.

"I think they’re very good-hearted students," Johnson said. "It’s a great example of students thinking about others, other than themselves."

Carolyn Bivona is proud of them for their selflessness, despite some of the unprecedented challenges they’ve faced in the past year.

"I didn’t realize how tough it’s been," she said. "They’re doing their sports and their schools are doing the best they can, but it’s still tough on the kids socially."

Anyone who wishes to buy a sign can get in touch by emailing SpreadloveRVC@gmail.com. Everyone involved agrees that this is an ongoing effort with no sign of letting up.

"As long as people want to buy them, we’ll keep making them," Avery said.