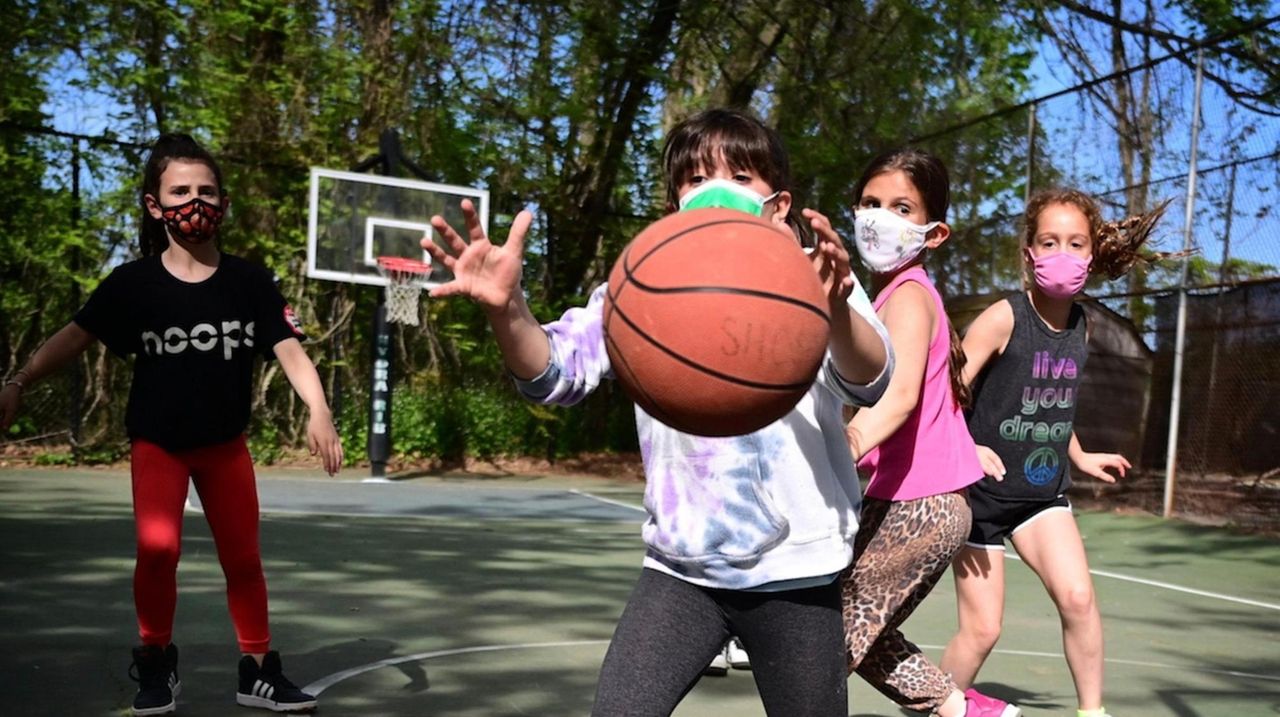 Dana Davidson, of Roslyn, organized a basketball league last fall run by other parents so that kids can feel a sense of normalcy while playing safely outdoors. Credit: Newsday / Thomas A. Ferrara

Every Saturday, Josh Liebman wakes up early and eats breakfast with his 7-year-old daughter, Abby. Then, they head to the Roslyn Pines Swim and Tennis Club to play some basketball. Liebman calls it their "morning ritual."

This was made possible by Dana Davidson. She is one of the commissioners of the Roslyn Booster Basketball Club, which used to be held indoors. All three of her children play sports, and last year the family watched their beloved activities shut down as a result of the coronavirus pandemic.

"I saw a need for it," said Davidson, of Roslyn. "We thought eventually gyms would open, but they didn’t."

So Davidson reached out to Roslyn Pines and asked to use their outdoor basketball court. At first, she invited students from her childrens’ grades to come play in small groups while wearing masks — second-grade girls and fourth- and fifth-grade boys soon hit the court, with parents volunteering to coach.

The basketball league has now expanded to include more than 300 kids, from kindergarten through sixth grade, playing seven days a week, Davidson said.

"What’s nice about it is that it’s open to everybody," she said. "Every kid is included, and the parents came together to make it happen."

In addition to coaching and acting as referees, parents donated pinnies, or scrimmage vests, for the players and a scoreboard. Davidson sends out weekly emails to all parents involved in the league, and always encourages them to spread the word. It’s $15 a session, and the money goes back to Roslyn Pines, she said.

For Davidson, a speech-language pathologist, this has become a second job. She does everything from getting high schoolers community service hours by volunteering, and sweeping and taking a leaf blower to the court afterward.

But it’s been rewarding, Davidson said. "It’s blossomed into this fabulous thing for the community."

The parent volunteers also work together to ensure COVID safety protocols. Each child brings their own basketball and only one spectator per practice, and everyone must wear masks, Davidson said. The sessions are broken up by grade throughout the week.

Not only is the league important for the children, who now get to play a sport together outside of school, it’s also been just as valuable to the parents, after more than a year of challenges.

"For parents to be able to come outside and socialize, and see kids playing and hear the sounds of laughter from children again, that was really meaningful," Davidson said.

Rachael Ende’s children, Max, 10, and Maya, 6, both play in the league. Max has been playing basketball for years, and Maya picked it up because of this opportunity.

"Everyone was talking about it and she wanted to get in on the action," said Ende, of Roslyn. "She loves it."

Ende appreciates that Davidson has worked so hard to provide this weekly activity for her kids.

"Children were stripped of everything they knew," she said. "Playdates, sports — so Dana really put on her thinking cap and said, how are we going to let these children socialize in a safe way? And that’s exactly what she did."

Liebman, of Roslyn, coaches the second-grade girls session, in which his daughter plays. He coached basketball for a season at Harbor Hill School in Greenvale, so helping out with Davidson’s league was a "no-brainer," he said. With his group of about 14 players, they run drills and then split into competing teams.

The girls also play games such as Sharks and Minnows and Knockout, which is Abby’s favorite — two players at a time go head-to-head taking shots from the foul line.

Abby said she usually likes to play defense. "I like that you get to run around a lot and you have to dribble the ball in order to shoot," she said.

Her favorite basketball team is the New York Knicks, she added. And of course, her favorite coach is her dad.

"We look forward to this every single weekend," Liebman said.