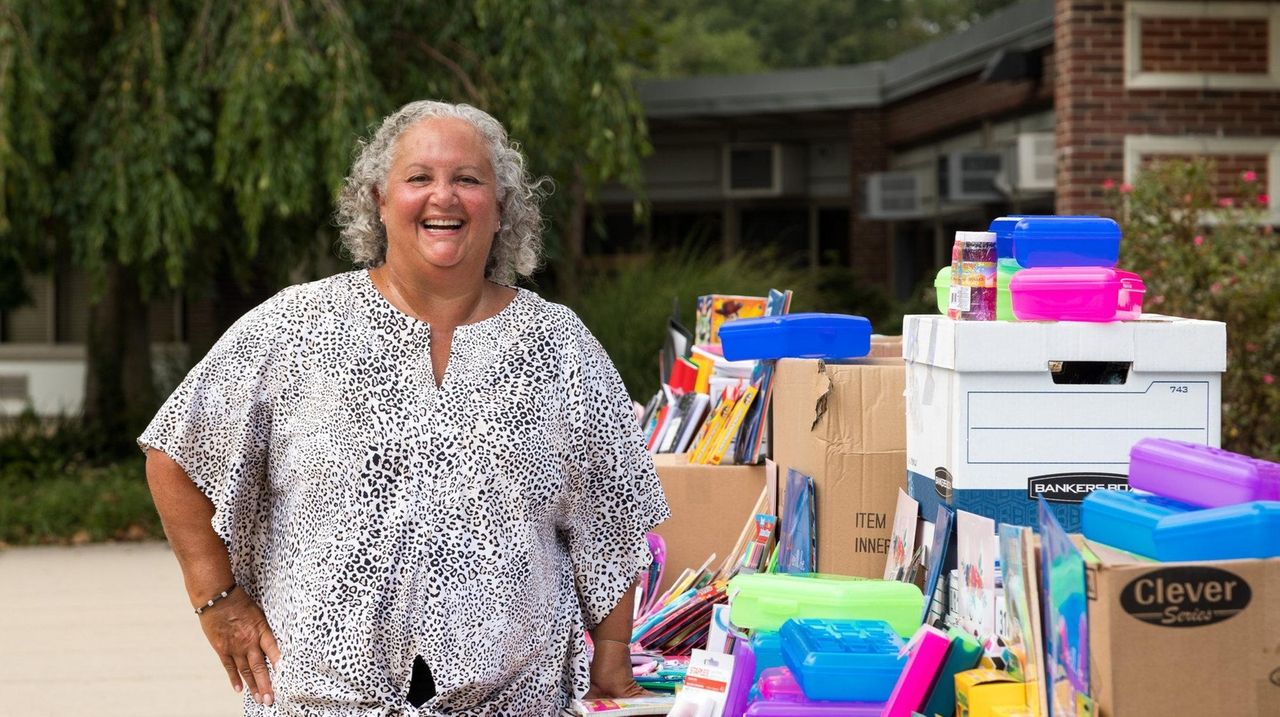 Leslie Friedman's daughter, Samantha, 27, died of an inoperable brain tumor in 2018. She was a teacher in Manhattan. To honor her daughter, Friedman led a school supply drive and has donated 16 boxes of materials to Oakwood Primary Center in Huntington. Credit: Barry Sloan; Photo Credit: Leslie Friedman

Leslie Friedman felt it was her daughter’s calling to be a teacher.

“My husband thought she would make a great lawyer, because her arguments were always very spot-on and a little on the stubborn side,” Friedman, of Elwood, said with a laugh.

But she said her daughter, Samantha Friedman, loved being around children. As a teen, Samantha worked summers as a counselor at Driftwood Day Camp in Melville, calling it her “happy place.” It seemed like a natural path for her to take.

Eventually, Samantha did become a teacher. Leslie Friedman said her daughter went “above and beyond” every year to buy the supplies necessary for her students’ success.

“Her kids were always her priority in the classroom,” said her mother. “She always felt that her children needed the supplies to get off on the right step.”

Now, Leslie Friedman is doing the same thing. For what will certainly be a challenging academic year because of the coronavirus pandemic, she’s donated 16 boxes of school supplies to Oakwood Primary Center in Huntington, in honor of Samantha.

After graduating from Walt Whitman High School in 2009, Samantha took an education class as an elective at the University of Delaware. That’s when she figured out she wanted to be a teacher. She focused on special education during her undergraduate years and received her master’s degree in literacy at New York University. Samantha then headed to P.S. 333 Manhattan School for Children to teach first grade.

About this time, Friedman said her daughter was suffering from migraines and being treated by a neurologist.

“The neurologist suggested an MRI,” she said. “And that’s when they found the growth.”

Samantha was diagnosed with a brain tumor in 2015, at the age of 24. She went through chemotherapy and radiation treatments at Weill Cornell Medical Center.

“She didn’t miss a day of work,” said her mother. “She did lose the use of her right hand, and she was righthanded so it was difficult for her to teach, but she did.” She added that Samantha also usually took an Uber to and from the school, because it was challenging to navigate public transportation while using a walker.

After a year and a half of treatment, Samantha was considered stable, said her mother — but then her doctors found a spot that hadn’t responded to the chemotherapy, and proved to be more aggressive.

After two and a half years of treatment, Samantha died in October 2018. She was 27.

Friedman said she’s received “countless” letters and emails from teachers and students at Samantha’s school. Her mother said they also dedicated the school’s library to her.

Since then, Friedman has carried on her daughter's legacy as a dedicated educator with school supply drives. She helped organize one at Driftwood Day Camp, where all the campers brought in donations. Last year, she assisted in a similar effort for the Wyandanch School District.

“This year with all the new protocols with COVID, I decided I would do the school supply drive on my own,” Friedman said.

She spread the word throughout the gated community in which she lives, via social media and email. Donations showed up right at Friedman’s door. “Within six days, I got 16 boxes of supplies.”

This includes 200 folders, 250 marble notebooks and plenty of pencils, backpacks and face masks, Friedman said. She added that some supplies have been donated for teachers specifically.

Friedman knows this school year will be especially difficult for parents and teachers, citing financial hardships from the pandemic and the possibility of remote learning.

“If kids are going to be in school and learning virtually, they’ll basically need two sets of supplies,” she said. “And I’m happy to help with that.”

Friedman picked Oakwood Primary Center to receive the donations because that’s where Samantha attended kindergarten through second grade. Principal Annie Michaelian learned about Friedman through one of the teachers at Oakwood, and then they met to talk about her plan.

“She is so generous and loving; I knew I wanted to be a part of whatever she was doing,” Michaelian said.

Michaelian said she’s planning to distribute the supplies to kindergartners before their first day, and make it a special event where Friedman can be there to tell the children Samantha’s story.

“I feel like a donation of this magnitude is a shining example of a community coming together and being compassionate and generous, and I’m honored to be part of it," Michaelian said.

Friedman said this particular donation drive was special to her. “This is where ... [Samantha] got her start,” she said.

“I always like to give back and help out, and my daughter’s calling was teaching,” Friedman said. “I think she’s happy with what we’ve done.”

10 events, things to do this weekend on Long Island
Nassau County's first winery opens in Oceanside
How to cook the best pork chop
New Mexican restaurant opens in Seaford
LI restaurants serving great soups
Didn’t find what you were looking for?