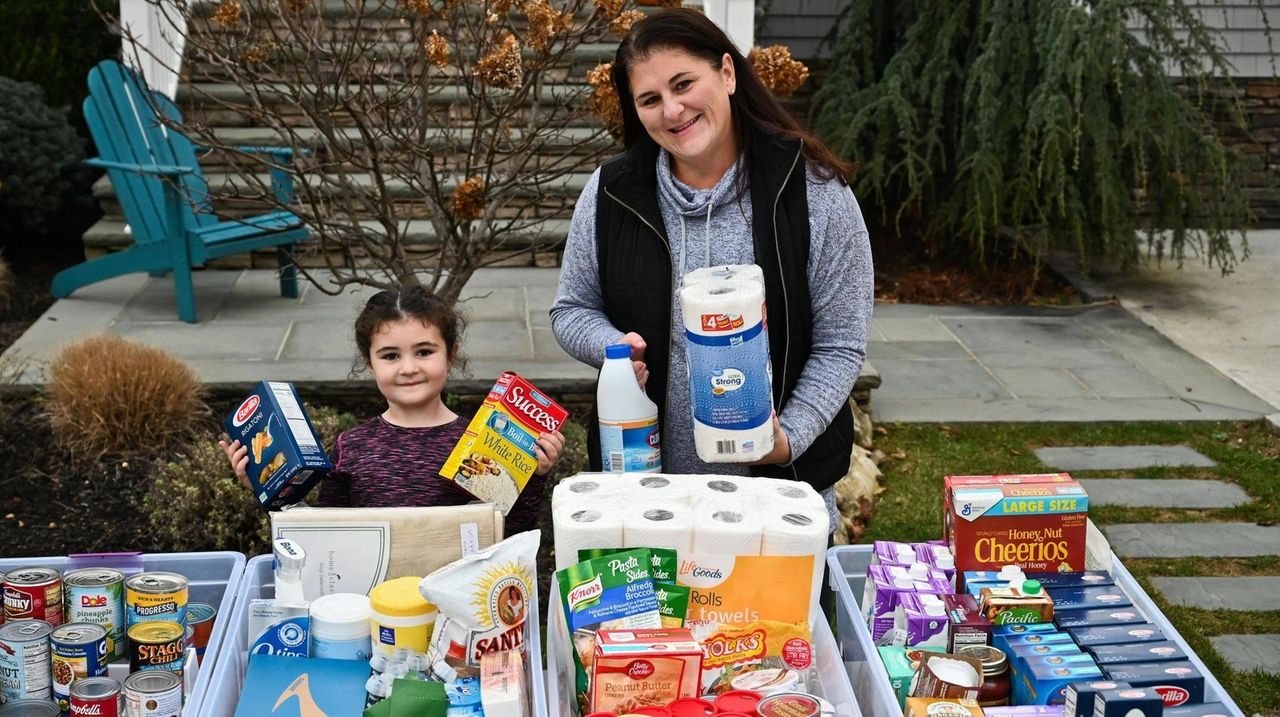 Mary Kate Tischler of Seaford started the Sharing Table as a result of the loss she faced prior to the pandemic, and the great need she's noticed in her community throughout 2020.

Mary Kate Tischler and her daughter, Ruby, 6, have a routine: They place canned goods, nonperishable food and toiletries on a long table on their front lawn. They retreat back into their Seaford home. And they wait.

This is Tischler’s Sharing Table. After being inspired by a magazine article about a woman in Michigan who collects and gives away essential goods, Tischler created her own version of the community initiative.

The message of her table is the same: "Take what you need, leave what you can, if you can."

"I just thought it was such an easy yet effective way to help local people," Tischler said.

Two Sundays ago, Tischler woke bright and early and said to herself, "I have nothing to do today — let’s do this."

She purchased some "starter supplies" to get the Sharing Table going, placing a delivery with her local grocery store at 6 a.m. "It also gave me an excuse to clean out my own cabinets," she said.

She filled the table with food including cereal, pasta and peanut butter, plus toilet paper, toothpaste and other toiletries. Then Tischler placed handmade signs on the table, indicating that everything on it was free.

With the help of her sister-in-law, Kristine Lenza, of Brookhaven, Day One of the Sharing Table was "surprisingly successful," Tischler said.

Lenza helped set up the table and donated items of her own. "I think it’s a great thing," she said. "I hope this becomes a little season of giving."

Weather permitting, Tischler now sets up the table every day. She said the Sharing Table will continue through Christmas — Lenza said she’s already hoping for a summer comeback.

Tischler wants people to know that their privacy will be protected. Nobody stands behind the table or watches what you take from it. The Sharing Table is judgment-free.

At the end of each day, Tischler goes back outside. Usually, just as many items have been taken as they’ve been given, she said.

"The world is so full of anxiety and fear right now and I feel like this a really positive way to remind people we can help each other and look out for one another," Tischler said.

On a recent day at the Sharing Table, Tischler was outside and approached by her neighbor Vincent Trentacosta, of Seaford.

"I think that everybody should put out a table like this in these trying times," he said.

Trentacosta thanked Tischler for her effort and noted, "I figured I’d stop by because I do need a few things, unfortunately. I’m very happy to have neighbors like you."

The Sharing Table has also taught Tischler's daughter some valuable life lessons. "It’s cool to share with my daughter that not everybody is as fortunate as we are," said Tischler.

One Long Islander reached out to Tischler on Facebook, saying she wished she lived closer to the Sharing Table and could have used some of the items on it. "I said, ‘Take a look at the photos [of the table] and send me a list."

Tischler and Ruby packed up a few bags and delivered them to a home in Bay Shore.

"It has a real impact on my daughter," Tischler said.

Now, seeing families stop by the table is "really heartwarming," she said. "A lot of people around here are struggling and not telling anyone out of pride, not wanting to ask for help."

Tischler added that several people have reached out to her for advice on starting their own Sharing Table.

Tischler said while donations are welcome, right now she’s more concerned about giving an excess amount of items away: "We need people to come and take it."