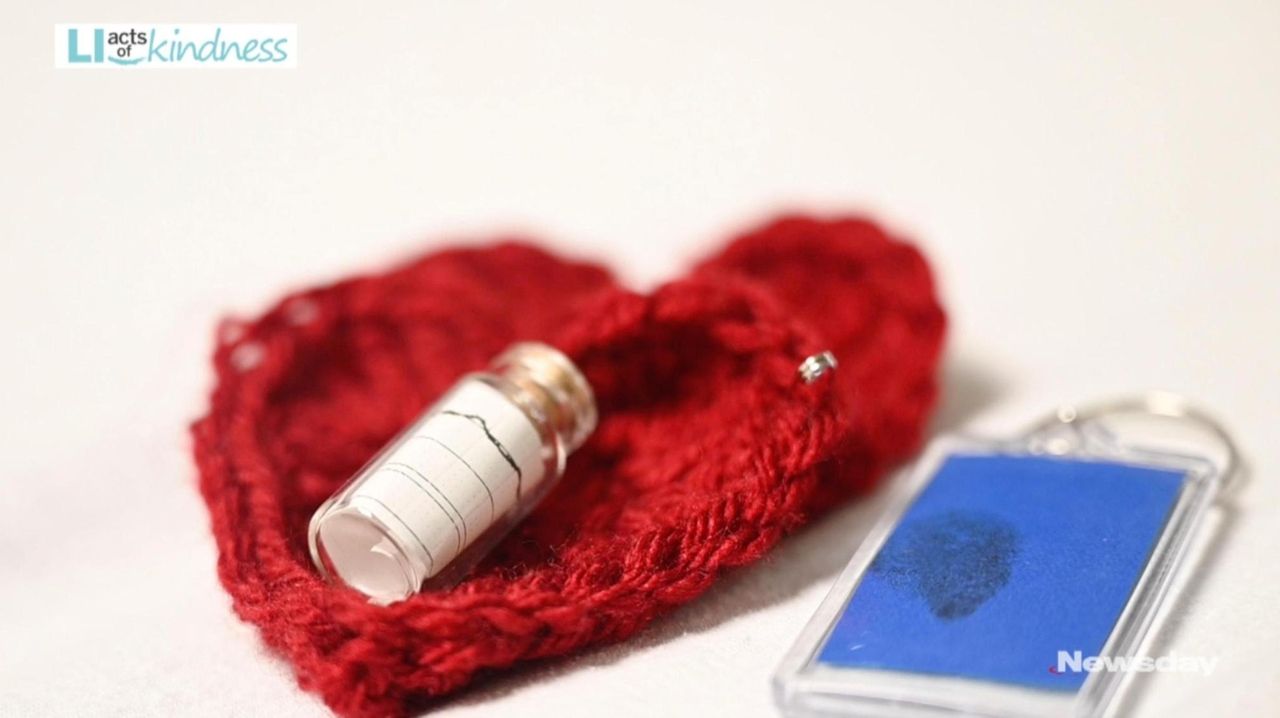 Melissa DePaola’s mother was fighting for her life.

In February, Carol Kloor spent two weeks at South Shore University Hospital's intensive care unit, after being diagnosed with peripheral artery disease. DePaola said her mother’s team of caretakers was constantly with her, even when DePaola couldn’t be.

One of the nurses at the Bay Shore hospital told DePaola about the Connected Hearts program.

Back in November, to keep ICU patients and their family members connected while there were visitation restrictions during the coronavirus pandemic, nurses started to collect handmade, crocheted hearts from Long Islanders. The staff gave matching hearts to the family members and the patients.

Despite not being able to see each other in person, the hearts would remind the family of their loved one, and remind the patient that they are loved.

"Our focus isn't just COVID patients," said Andrea Freudenberg, assistant nurse manager of the ICU at South Shore. "It’s the whole population. We felt we could give them that connection."

If a patient dies, the nurses also give their family a small vial containing an electrocardiogram (or EKG) strip of their loved one's final recorded heartbeats. The hospital also offers keychains with the patient’s fingerprint on them.

When her mother died in February, DePaola, of Medford, was thrust into a "whirlwind of activity." When she was first told about the Connected Hearts program, she said a million other thoughts were racing through her mind.

Fortunately, when the nurse offered the EKG strip and the crocheted heart that Kloor had been holding onto, DePaola said yes. As she left the hospital, she held her mother’s pocketbook and favorite sweater, plus the crocheted hearts, vial and keychain.

"While I was waiting for the valet to bring my car, it just made me feel better that I had something tangible to hold in my hands other than her belongings that she went to hospital with, two weeks earlier," she said.

Every month, a team of ICU nurses meets and brainstorms ideas for different mementos they can offer. Nurse manager Heather Kennedy remembers receiving a stuffed kangaroo from a hospital when her grandmother died, and the comfort that gave her years ago inspired her to come up with similar ideas for patients and their families now.

"A lot of staff has really been engaged with this," she said.

Last fall, Freudenberg reached out to The Islips Feed the Southside Hospital Employees, a community Facebook group with more than 3,000 members currently. She asked if they had some yarn, crochet needles and time to contribute to a worthy cause.

Soon enough, Long Islanders were crocheting hearts and dropping them off or mailing them to the hospital. Some nurses even picked them up from people’s homes and brought them over.

"We’ve gotten hundreds of hearts, maybe even thousands," Freudenberg said. "We still have so many."

For now, the Connected Hearts program is limited to ICU patients and their families, but registered nurse Maureen Hayes said she hopes to expand it to the rest of the hospital soon. "We have another meeting coming up," she said. The nurses will also start brainstorming creative, in-person initiatives to help families say goodbye to loved ones.

Kloor underwent two surgeries at South Shore. DePaola said the staff was "amazing," in terms of communication and care.

"She appreciated the people that were taking care of her," DePaola said. "And I think they knew that."

During this time, visitation in the hospital wasn’t as restricted as it had been throughout the pandemic. Three visitors were allowed in the room at a time, said DePaola.

But Connected Hearts still served its purpose — even though DePaola was able to hold her mother’s hand as she died, the crocheted heart is now a reminder of her life.

Dina Dietzel, a registered nurse in the ICU, said they’ve received emotional reactions from families who decide to participate in the program.

"You can tell they’re so thankful for the [EKG] strip, so they know their family member’s heart was beating when that strip was printed," she said. "And to have that family member and patient holding the same hearts, it’s so heartwarming. I’m thankful we can make a horrible situation slightly better by giving comfort to those family members."

DePaola said she’s thankful to the hospital staff, for taking those extra steps and showing how much they care.