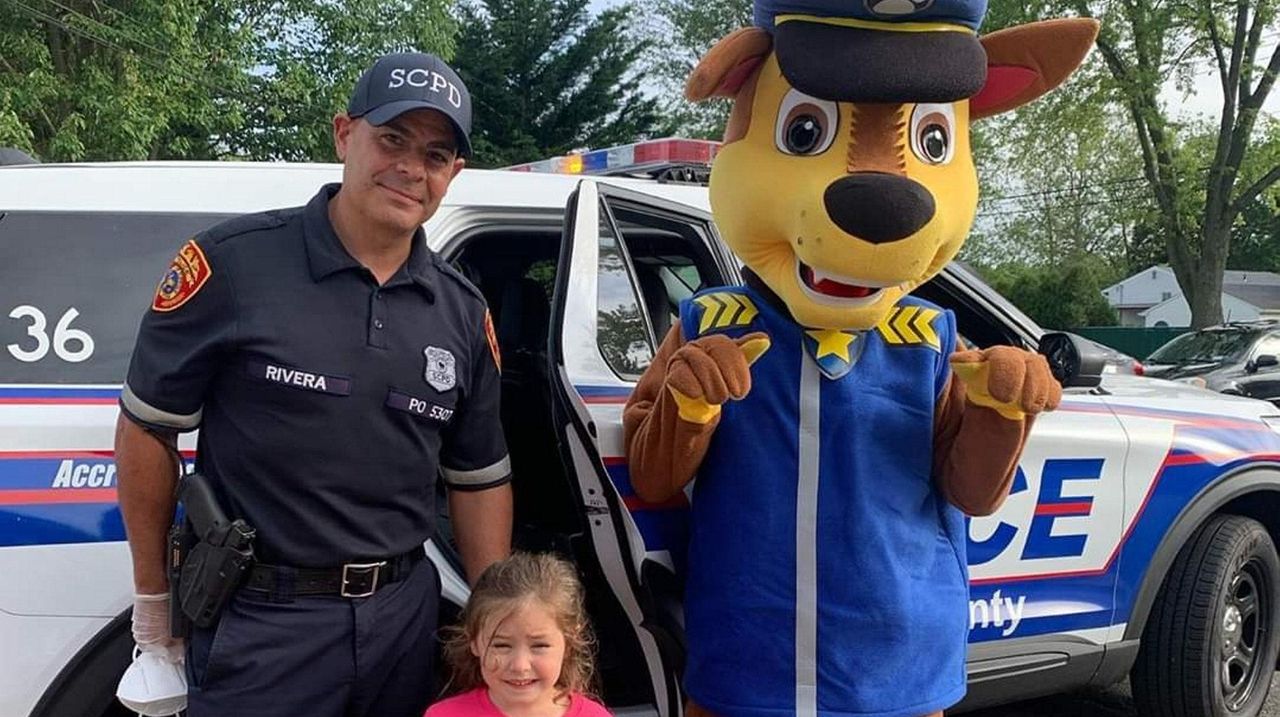 Liliana DiMaio of Bay Shore was surprised on her fifth birthday on June 18 by members of the Suffolk County Police Department in a drive-by parade.  Credit: Tara DiMaio

It had been a dreary three months for Liliana DiMaio of Bay Shore.

Her family thought the normally buoyant 4-year-old was uncharacteristically glum in the months that the coronavirus changed everything.

Unable to see her friends or go to her preschool — and too young to fully understand a world altered by a mysterious disease — Liliana seemed to absorb the sadness and anxiety around her, her family said.

“She was actually very fearful to go anywhere,” said her mother, Tara DiMaio, 32, of Bay Shore. “She would always talk about the virus."

To lift her spirits, Liliana's family planned a car caravan party to celebrate her fifth birthday on June 18. But they thought it had to be something different — a unique party for a unique girl.

Liliana loves anything related to the police and loves dressing up in a cop costume. So her grandmother, Erin Daly-Spano of Lindenhurst, called the Suffolk County Police Department's Third Precinct in Bay Shore and asked if a real cop could appear at the party.

Daly-Spano said the precinct was noncommittal, with an officer saying it would depend on whether they had to respond to any emergencies that day.

Until the day of the party, Liliana's family had no idea whether anyone from the precinct would attend.

Then, the caravan of about a dozen cars rolled down Kansas Avenue in Bay Shore — with a Suffolk police SUV driven by Officer Peter Rivera helping to lead the way.

Unbeknown to Daly-Spano, her request had landed on the desk of Rivera, 47, a 25-year veteran assigned to the precinct's COPE unit, which usually responds to community complaints and quality-of-life issues.

"I just picked up the phone at the right time," Rivera said in an interview.

Rivera said he rummaged around the precinct and found some age-appropriate toys left over from a December holiday gift collection drive. Then he packed up his SUV and drove to the parade.

Joining Rivera in the SUV was Chase, a character from Paw Patrol, a police-themed cable television series that is one of Liliana's favorites. (Actually, Chase was a man in a costume: Liliana's uncle, Frankie Spano, 22, of Lindenhurst, a SUNY Farmingdale criminal justice major and aspiring cop.)

Rivera drove past the party, lights swirling and sirens blaring. He swung around the block and stopped in front of Liliana, then got out of the vehicle and posed for photos with Liliana and her family. He presented the girl with a succession of gifts, such as a stuffed purple unicorn, a life-size Barbie doll and a Moana doll. By coincidence, Moana is one of Liliana's favorite Disney animated movies.

Since that day, Liliana has been her old self. The girl who refused to go out or wear a protective mask doesn't seem so afraid anymore.

Cult mushroom supplier opens new gourmet market
Try something new: Recent LI restaurant openings
LI drive-in movie, concert schedule for the summer
A princess celebrates her birthday this weekend and you're invited
3 LI restaurants to try this weekend
2:54
10 events, things to do this weekend on Long Island
Didn’t find what you were looking for?