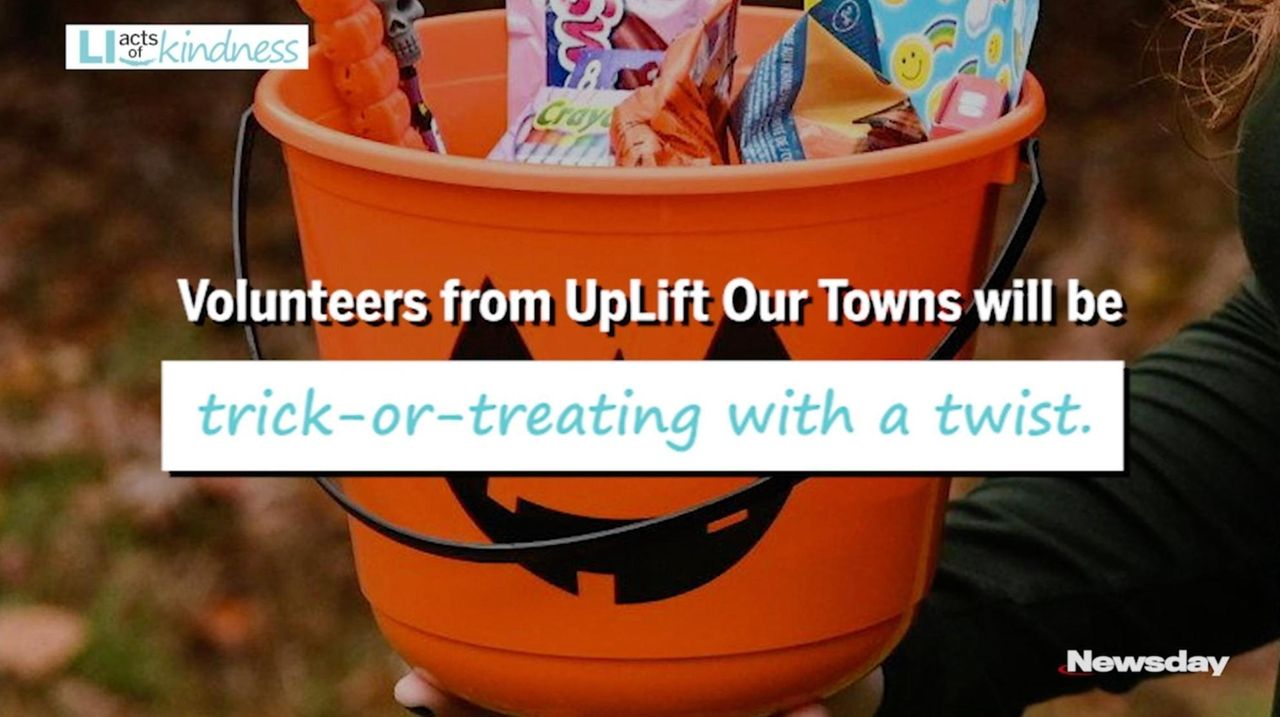 On Halloween, the organization UpLift Our Towns will deliver baskets of "quaran-treats" to about 50 families they've helped previously during the pandemic in Central Islip and Brentwood. Credit: Newsday / Steve Pfost

This Halloween, Long Islanders are forgoing tricks to hand out extra treats — specifically to those who may need them the most.

Volunteers from the organization UpLift Our Towns will be trick-or-treating with a twist. They’re knocking on doors and giving candy to children in Central Islip and Brentwood on Halloween.

UpLift Our Towns was founded in 2016 and supports families in those communities with clothing and food donations. The organization also acts as a hub of information about local happenings for community members and holds youth events under normal circumstances, said its president Miguel Turell.

"We came together because we saw a need in the communities where there was a lack of things for kids to do, and a lack of resources for people in need," he said.

During the pandemic, Turell said volunteers spent their time delivering groceries to families. For Halloween, they reached out to those same families to see if they’d like to celebrate in a socially distanced way.

Volunteer Linda Romero, who is an UpLift Our Towns board member, has been shopping and collecting donations to create "Quaran-Treat" baskets for children in Central Islip and Brentwood.

"There’s candy, bubbles, chalk, crayons, coloring books, someone donated those surprise toy packages," she said. Her dining room table in Central Islip is filled with the supplies, along with the bright orange plastic buckets to hold all of the goodies.

Romero said the idea came about when the volunteers started to realize that trick-or-treating is out of the question for many children this year during the pandemic.

"We wanted to give the kids a pick-me-up," she said. "They already had a tough year; let’s give them a nice Halloween."

Romero and six volunteers will be delivering the baskets to about 50 families on Halloween, she said. And to keep another tradition of Halloween alive, they’ll all be in costume when they knock on doors.

But this time, the trick-or-treaters will be the ones providing the candy.

"We’re hoping to dress up as the characters from ‘Inside Out,’ " Romero said, citing the 2015 Pixar blockbuster. "We’re hoping what we ordered comes in time; otherwise it’ll be whatever we throw together."

Turell said this has been a "united effort" with lots of community members eager to get involved. The organization got a "huge" donation of candy from Adventureland, Romero said.

"In general, there’s always a need in communities like Brentwood and Central Islip," said Turell, who grew up in Brentwood. "They are communities that are underfunded and overlooked a lot, and if we don't take care of ourselves, nobody’s going to help us out, either."

Up next, Turell said UpLift Our Towns will "adopt" a local family in need for Thanksgiving, providing them with meals and support for the coming holiday season.

Colorful costumes for a cause

This year, four girls are wearing their Halloween costumes for a cause.

Ella Merkle, Lyla Meslin, Ashley O’Connor and Samantha Panzica, all 10 and of East Meadow, decided that they wanted to dress up as different colors of nail polish.

The girls, who have been friends since kindergarten, quickly discovered that the colors they wanted to use in their costumes each represented causes they care about. They’ll don tutus and knee-high socks with their color of choice, along with matching OPI Nail Polish shirts and beanies.

On Halloween, with the help of their mothers, the girls will set up a booth in their East Meadow neighborhood where passersby can donate to their causes and receive a goody bag.

"She’s been passionate about breast cancer for a while," Merkle said. Ella will raise money for The Maurer Foundation, a nonprofit organization based in Melville that focuses on breast health education.

"She’s come to visit my aunt with me and has seen what a horrible disease it is," Panzica said.

Samantha said this is the first time her friends decided to do a group costume for Halloween, and the idea came into place perfectly. She’s looking forward to skipping trick-or-treating this year, for an important cause.

"At the booth we’re going to give out bracelets and pamphlets about each cause," she said. "Then we’re going to try our best to divide the donations evenly."

Panzica said the girls have already raised $500 via social media. "Everyone has been so wonderful, helping the girls give back," she said.

Jackie Meslin is proud of her daughter and friends for creating an opportunity to give back to those in need, during a time when it’s more important than ever.

"They’re all fifth-graders, which is a graduation year in our district," she said. "This year was supposed to be fun and full of dances, parties, the Halloween contest and parade, and none of it is happening as of now. So they just got together and tried to make a sad thing into something worthwhile, as much as they can."