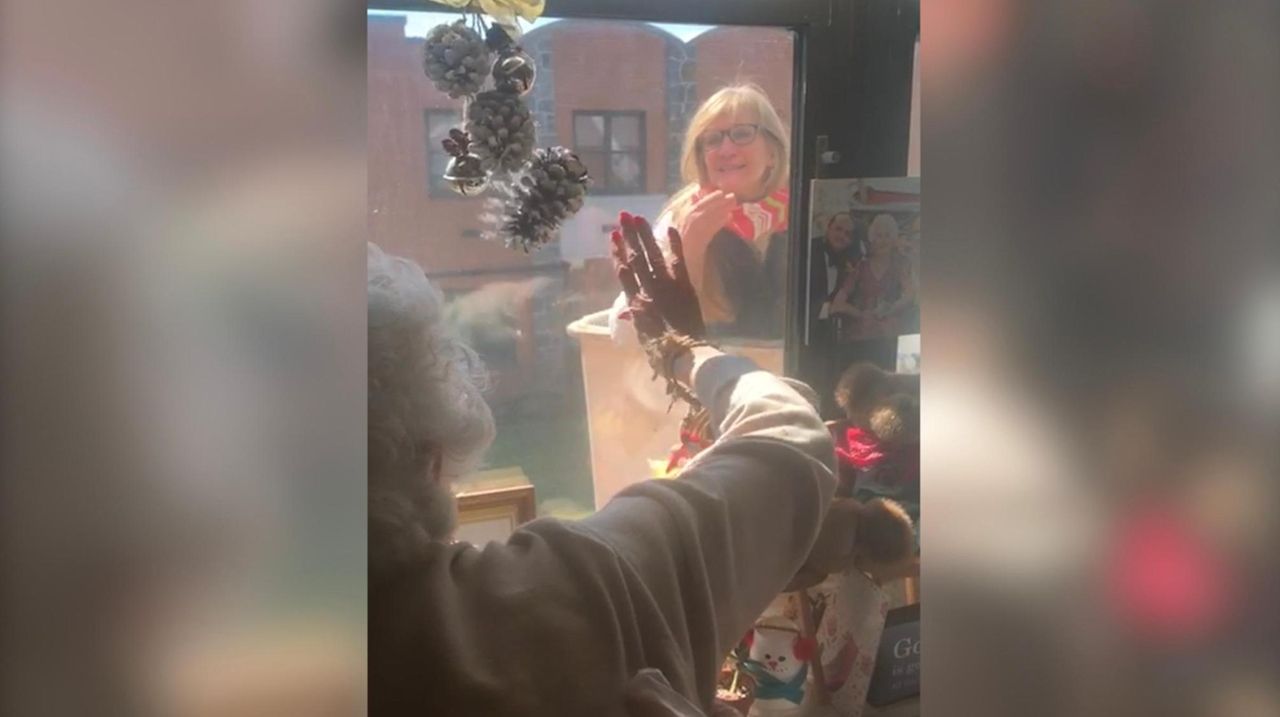 The few short blocks between them had grown into a lifetime. Eve Miceli had been unable to visit her mom, what with the nearby health care center where her mother lived in St. James closed to visitors going on six weeks due to COVID-19 pandemic protocols.

Watching the scenario unfold at their home in St. James, Eve's husband, John, racked his brain, trying to come up with a way his wife could spend time with her 87-year-old mother, Lorraine Sayler.

"He even said, 'What if we went and put a ladder up?'" Eve Miceli, 57, recalled Wednesday.

Then John Miceli got an even better idea: What if they got a cherry picker bucket truck?

The 58-year-old musician, a drummer who's played with Meat Loaf, Brian May of Queen, and a host of other stars worldwide, isn't known to fans as "Mighty" John Miceli for nothing.

He vowed to make the visit happen.

Anthony Degradi, 25, owns Xterra Tree Service in Wading River. And he just happened to have a tree-trimming bucket truck sitting idle, thanks to the pandemic.

"John said it would be really cool for his wife, because she was really upset over the situation," Degradi said. "I was like, 'Yeah, we can do that.' "

Eager to help, officials at the St. James Rehabilitation and Healthcare Center quickly signed off on the idea. And Saturday, sun in the sky and spring in the air, Degradi and his fiancee, Amy Kitz, 25, of Wading River, a nurse at the New York Cancer and Blood Specialists in Riverhead, drove the truck to St. James and parked it alongside the rehab center.

Minutes later, the bucket lifted Eve to the window of her mom's second-story room.

What happened next lifted the spirits of everyone involved.

Video captured the scene: With Eve on one side of the glass, her mom on the other, the two reach out and press hands against the windows.

"How are you feeling?"

Eve, John and their son, Scott, each got to spend a few short minutes in the bucket visiting with Lorraine. But, Eve Miceli said, that time spent meant all the world.

"The Miceli family wants to send a huge thank you to all the staff at St. James Rehab Facility," John Miceli wrote in a post-visit post on Facebook, adding: "They are an incredible group of caring people . . . aides, nurses, doctors, recreation, physical therapists, cooks, housekeeping, management . . . all fighting on the front line. Thank you all."

The only regret, Eve Miceli said, was that daughter Anna lives in New York City and couldn't be on hand. And that neither could Eve's three sisters. One, she said, is stranded with her family in St. Martin. Another sister lives in Florida, while a third is in California.

Eve said the big surprise was that she didn't think twice about hopping into the bucket for the ride to the second-story window. After all, she said, she doesn't do roller coasters, Ferris wheels, or any of the other scary rides at the amusement park.

"I'm the jacket-holder," she said. "I'm the one who takes the chicken walk at Disney. But, this is your mom."

As Eve said: "It'd been a lifetime. Before this, I'd been visiting her every single day, sometimes twice a day. It's like 10 blocks from where we live and sometimes I would even walk there. Then, you go from that to not seeing her at all, well. . . . We were all crying. I was just so excited to see her face. She was excited, too."

"It was pretty emotional," Anthony Degradi said. " . . . With everything that's going on in the world right now, a little bit of happiness goes a long way."