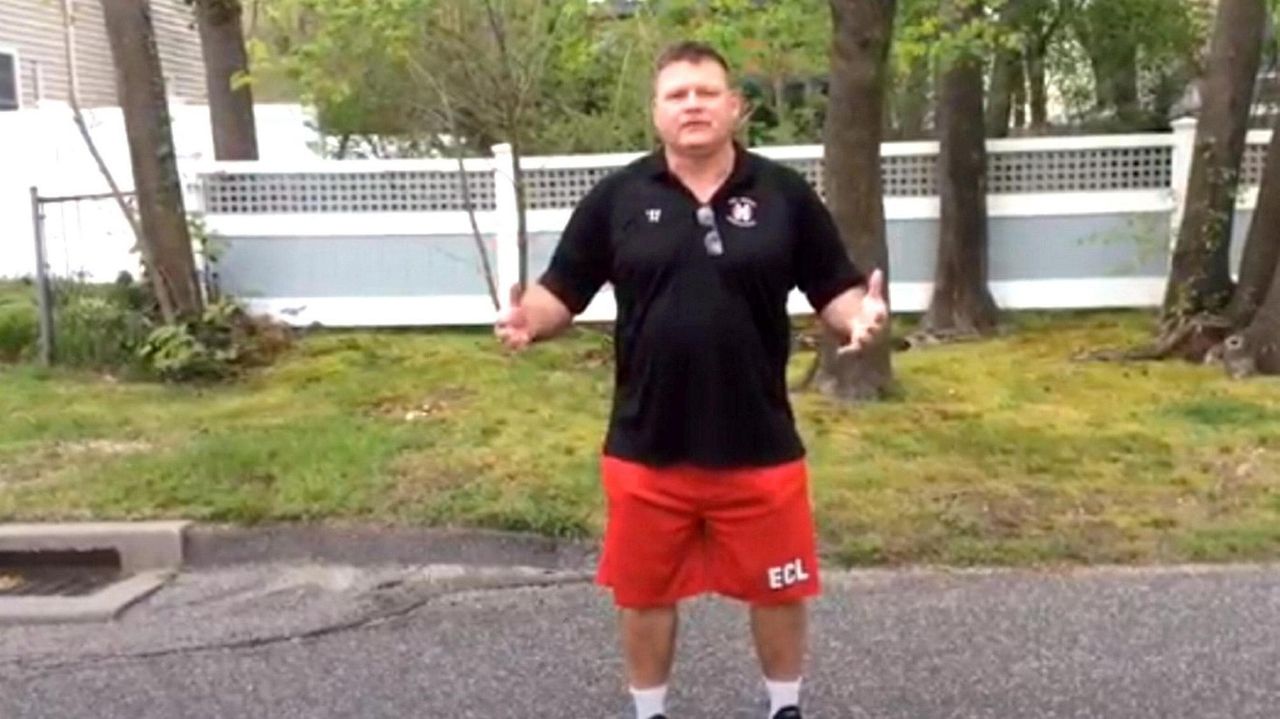 As a way to keep in touch with students, Eric Strovink of Mount Sinai Elementary School created "Walk & Talk" videos for the children at his school, and a webpage featuring everything from reading time and workout videos to the walking-tour Long Island history lessons. Credit: Eric Strovink

Hey kids! Did you know Nikola Tesla experimented with the development of electricity right here on Long Island?

Or that Guglielmo Marconi, father of modern-day long-distance radio communication, had a broadcast hut where they talked to ships at sea — from Suffolk County?

Eric Strovink, better known in the halls at Mount Sinai Elementary School as Mr. S, was looking for a way to stay in touch with students during the current pandemic lockdown — and decided to go for a walk.

That journey, a little more than a month ago, evolved into a series of so-called "Walk & Talk" videos for the kids at Mount Sinai, grades kindergarten through fourth grade, and a webpage featuring everything from reading time and workout videos to the walking-tour Long Island history lessons. Those are produced by Strovink and fellow physical ed teachers Jessica Heinsohn-Wilson and Mike Kollmer.

"At first, I was like, hey, I want to do something different. Go for a little walk, talk to the kids about crossing the street safely," Strovink said. " . . . Then I thought, the kids miss their teachers and we miss them. This is a nice way for them to go on a little journey with me."

The first video featured Strovink, a former minor league baseball player and father from Rocky Point, on a walk from his house to the Shoreham site of the famous Tesla Wardenclyffe Tower, then to the home of his longtime friend, Rocky Point High School baseball coach Anthony Anzalone.

The coach shows Strovink, 50, and the kids a handful of workout routines in his garage. (Want to learn how to do jumping jacks?)

The video is simple: Mr. S explaining how to use the traffic light control buttons and the crosswalk at a busy street corner along North Country Road; and illustrations of the Tesla Tower, with explanations on how Tesla "was a pioneer in power" and how J.P. Morgan invested $200 in the project.

"I'm not Steven Spielberg here," Strovink said. "But we were able to sort of figure this thing out. For me, it takes like about 12 hours to edit these now. They've gotten better."

Each of the teachers plays a different role. "I don't really like to be on the video," Heinsohn-Wilson, better known to students as Mrs. Wilson, said. "I'm a little more shy."

So, while Heinsohn-Wilson did appear as an extra with her 9-year-old son and 11-year-old daughter in the most recent "Walk & Talk" video on Greenport, she prefers to scout locations and help with camera work and ideas.

She's worked with the affable and animated Strovink for about 10 years now. "I let him do his thing, his shtick," she said. "It works."

Like video of Mr. S singing in his car on the way to Greenport.

"One parent, after the Tesla video ran, said: 'Hey, give me another of those Walk & Talks. My son really enjoys those videos.' There are so many places we could go, all these things people didn't know existed right here on Long Island."

Learning as they teach

Kollmer, a former student of Heinsohn-Wilson's when she taught at the high school, sometimes appears on camera, as he did in the video about Marconi and the old RCA broadcast site in Rocky Point. Sometimes, he helps shoot video featuring Strovink.

On the web homepage there's video of Kollmer teaching students to jump rope, while others feature Strovink teaching them how to throw a Frisbee, dribble a basketball. Or field a ball, then throw it.

Catherine Lutjen, a Mount Sinai student-teacher, has a series of featured exercise and workout videos on the webpage, showing kids how to do the cha-cha and Hokey Pokey and teaching them how to play cornhole and other games.

Producing the videos has been a learning lesson for the teachers. Strovink said the wind was so bad when they shot some of the videos that you couldn't hear him talking.

He had to learn how to delete the soundtrack and do voice-overs.

"I'm a mumble mouth to begin with," Strovink said. "I was doing the voice-over and I was having so much trouble just saying Greenport. I was like Francis Ford Coppola. 'OK, Take 25 . . . Greenport.'"

He laughed. "We didn't know how to do this. But now we're getting better at it. . . . They're very simple, about 10 minutes, that's about as long as you can go.

"But, there's a connection," he said. "We go somewhere and the kids, now they can go, too."

Fishers Island Lemonade debuts vodka-spiked ice pops
1:03
A cherry blossom festival blooms in Greenport
6:10
An accident almost derailed her baking career. Now her cake shop is a runaway success
LI drive-in movie, concert schedule for the spring and summer
Mother's Day celebrations on LI, more things to do this weekend
Where to get great gelato on LI
Didn’t find what you were looking for?