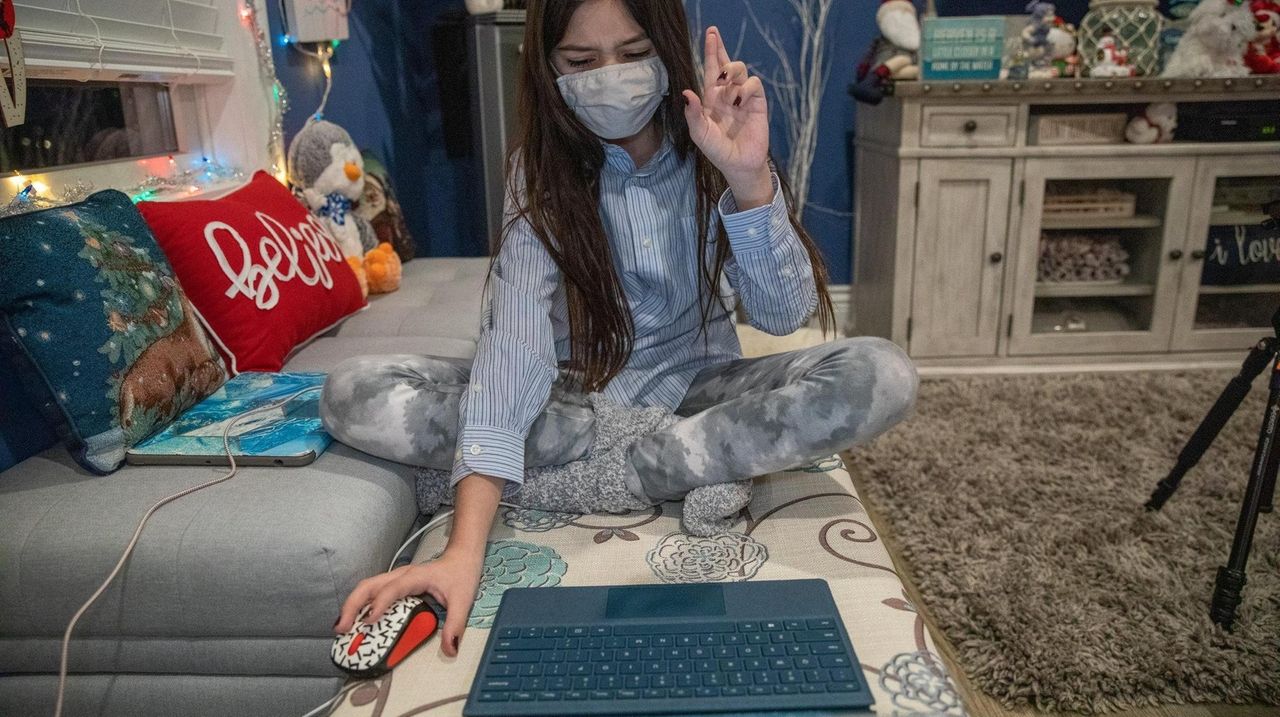 When Babylon resident Catherine Safos' daughter Vassi began remote learning at the start of the pandemic, she knew her daughter would need a way to socialize, even if that meant electronically through the popular game "Among Us." Credit: Morgan Campbell

A new video game fad has kids tossing around vocabulary such as "sus," "vent," "impostor" and "emergency meeting."

The cartoonlike game, called "Among Us," is a multiplayer effort. The computer randomly assigns each astronaut on a spaceship either the role of a crewmate racing to complete tasks or the coveted secret role of the impostor racing to kill them all before they finish. If, however, the impostor "Among Us" acts "sus" — that would be suspicious — perhaps by being caught "venting" — that would be traveling through secret passageways that regular crewmates don’t have access to — a crewmate can call an "emergency meeting" so everyone can vote on who they think is the impostor and boot him off to win the game.

"It’s really so fun you can’t take your eyes off it," says Sofia DeMasi, 9, a fourth-grader from Central Islip who plays with friends or with her cousin Avien Perdomo, 12, a seventh-grader from Brentwood.

A POPULAR GAME 'AMONG US'

"Among Us" caught on among tweens and teens during the pandemic and escalated in popularity when kids went back to school in September. "I came to school one morning and all the kids were talking about this game," says Zoey Spolansky, 11, a fifth-grader from Plainview. "It’s a really fun game to play with your friends. It’s like a mystery kind of, because you're trying to find out who the impostor is."

In the fall, hundreds of thousands of people were watching players stream the game on the online Twitch platform, which is a measure of a game's popularity, says Mat Piscatella, executive director of gaming for NPD Group, a Port Washington based company that charts marketing trends. "It has chilled out a little bit since then." Seventy percent of the players are in the age 13 to 24 range, he says. "It is very heavily focused toward teenagers and younger adults."

Brendan Bosak, 15, a tenth-grader from Lindenhurst, and his sister, Haley, 14, a ninth-grader, have been playing with their cousin in Buffalo every night at 8:30. Their mother, Ginger, 51, who works for CBS News, says she loves that the game makes her kids feel less isolated during the pandemic, and for that reason, she doesn’t mind that it’s more screen time after they finish their screen schooling.

"They’re now connecting with family members they might not have connected with before the pandemic," Bosak says. "Knowing they are able to reach out and see other people without leaving the house is very comforting … it gives them the opportunity to let off some steam."

Dad Matt Spolansky, 40, who runs a preschool and day camp, says Zoey and her friends call each other on FaceTime on their smartphones and can see and talk to each other while they are playing the game simultaneously on a tablet or laptop. "It’s certainly keeping her and her friends busy. I know they’re all into it."

The game is free to play on a smartphone; there's a minimal fee to play on a laptop. Parental alert: Players don’t always play with people they know. They can also play random players. And some of those players may use off-color language; parents can have kids set their game to "censored" to help avoid exposure.

Most players interviewed say they prefer being the impostor to a crewmate because it’s more fun to strategically knock off other players and sneakily try to frame others for your dirty work. "Sometimes, I say someone vented in front of me or I say someone else was faking a task," says Brittany Benavides, 11, a sixth-grader from Central Islip who plays almost every day after school.

"I like making people think something happened when it really didn’t," agrees Vassi Safos, 9, a fourth-grader from Babylon.

"I like the strategy," says Lucas Lum, 11, a sixth-grader from Syosset. "You plan out your attack. It’s basically like ‘Murder Mystery’ or ‘Clue.’"