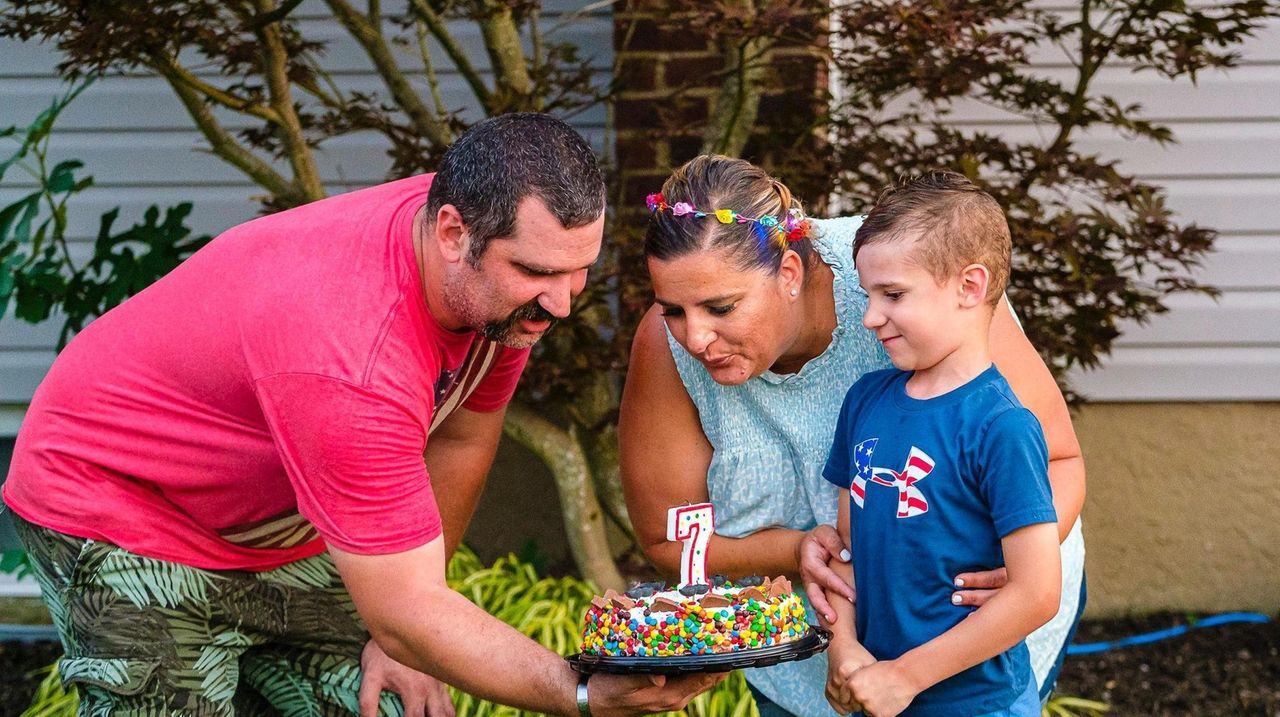 Those with summer birthdays have come up with creative ways to celebrate. Jennifer Muccioli, of Farmingdale explained how she adapted her children's birthday parties during the pandemic.  Credit: Jeff Bachner

In the beginning, car parades were a consolation prize for devastated children who had their birthday parties canceled due to coronavirus. But now, kids all want one, parents say.

But because it’s summer and society has opened up more, families are adding other festivities after the parade, when partygoers can park and enjoy even more fun. Or, they are coming up with other creative ideas to celebrate a child’s big day in a new way.

Here are some ideas from Long Islanders, from frolicking in foam to unicorn encounters:

Benjamin wanted a “Sharknado” themed birthday party, says Weiner, 40, a program director at a nonprofit. “We had the traditional car parade; we had a person lead the parade in a shark costume,” she says. Then, a van from Creative Games in Hicksville parked on her driveway blasted foam several feet high.

“We thought foam flying in the air would be like the tornadoes from 'Sharknado,'” Weiner says. Families who felt comfortable stayed to let kids play in it. “We got inflatable shark toys and beach balls that could be thrown around,” Weiner says. “We didn’t have to worry about the kids touching each other because they were in soap.”

Families are adding an extra element to backyard parties by renting bouncy waterslides or playground toys or by hiring entertainment experts to lead the fun.

After Erin Fusco’s neighbors rented an enormous bouncy waterslide for a July Fourth celebration, the North Bellmore mom and pharmacy supervisor, 37, saw how much her son enjoyed it and decided to rent it for Joseph’s 7th birthday in August. “It’s something different,” she says. “The slide is wet; they go down the waterslide and end up in a pool.”

Jill Bergson of Setauket added gigantic Imagination Playground interlocking foam blocks to her son Anderson’s 10th birthday backyard family pool party in July. “The older kids were building forts, the younger kids were just kind of climbing on them,” says Bergson, 42, a physician. “It made for the perfect day.”

And Antonietta Manzi of Manhasset hired her daughter’s dance studio, Annmarie’s Studio of Performing Arts in Great Neck, for a backyard party for her daughter Bianca’s 4th birthday. They organized Bianca, her siblings and cousins in a bunny-themed party that included painting ceramic rabbits, hopping in bunny-themed sacks, and more. “They were great. They social distanced from us,” says Manzi, 38, a stay-at-home mom. “The kids had such a great time.”

Even though restrictions have been relaxed to allow small birthday parties, Erin Verbeeck of Seaford says she isn’t ready to organize one for daughter Madelyn’s 5th birthday.

So on Aug. 7 Madelyn will have a car parade — after going to so many, she’s expecting one of her own, Verbeeck says — and the next day, a Saturday, the family plans to take her to Great Adventure’s safari drive-through in New Jersey.

“Ooh, we don’t have to be near anybody. I like that idea,” Verbeeck says she thought. That will make her daughter happy, says Verbeeck, 39, a school psychologist. “She’s not saying, ‘Why aren’t I having a bounce house party?’”

For Olivia Kunkel’s 10th birthday in early July, her family set up a big screen to show “Charlie and the Chocolate Factory” on their corner lot in Farmingdale. Partygoers could each spend $5 in "Olivia Bucks" at a concession stand with hot dogs, popcorn and snacks.

“Everybody brought their own chairs and blankets,” says mom Jennifer Muccioli, 42, a director of communications. “They could choose their own comfort of social distancing. We sang ‘Happy Birthday’ before the movie started.”

Olivia’s bash was such a success that to celebrate Paulie’s 7th birthday, the family did the same thing on July 17, this time showing “The Lego Movie” and doling out “Buggie Bucks” — Buggie is Paulie’s nickname. A perk for mom and dad: “It was the cheapest birthday party we’ve ever thrown,” Muccioli says. “People had a blast.”

Nicole Hollingsworth of Freeport has five children — all born in June, July or August. Her parties for them are evolving over the summer as restrictions are relaxed. The two June kids, Delaney, 11, and Myles, 16, only had family over in the backyard to celebrate, says Hollingsworth, 44, who describes herself as a real estate agent/stay-at-home mom. But her July babies — Elijah, who just turned 18 on July 3, and Brandon, who will soon be 21, have been able to celebrate with friends.

Hollingsworth arranged a surprise party for Elijah in their backyard underneath a tent with a dozen of his friends, bringing in a vegan chef because Elijah is vegan. "I started my day thinking I'm not going to do anything because we're in quarantine," Elijah says. "I was genuinely surprised. I was ecstatic." Mom and Elijah were also able to enjoy his annual tradition of blowing out a birthday candle at Red Lobster — they've been going since Elijah was about 5, even though, being vegan, he no longer actually eats his slice of cake.

On July 21, Brandon and a few friends, cousins and his parents will go into New York City for an outdoor rooftop dinner. It remains to be seen what Emmett's party will entail when he turns 10 in August, depending on what the restrictions are at that point, Hollingsworth says.

Katie Prudente of South Huntington was brainstorming how she could have a celebration for her son Austin’s 7th birthday that would meet social distancing guidelines and hatched a plan to have the families of five of his friends surprise him at Crab Meadow Beach in Northport on a July weekday.

The beach has a food pavilion where Prudente can order pizza and ice creams for the kids, and they can all swim. All the families are Huntington town residents, so they will all be able to enter Crab Meadow. “All five of them responded right away that they plan to come and they’re very excited,” says Prudente, 37, a high school assistant principal. “The boys haven’t had a chance to see each other since school let out.”

Mya Diaz’s 16th birthday was in April. Originally, the family had planned a trip to Greece to celebrate. But that got nixed. They pivoted to a party for 60 to 70 guests at a rented venue and bought Mya a beautiful dress. “Then, as the numbers started growing, I said, ‘We’re not doing this,’” says Mya’s mother, Noemi Diaz, 44, who was a human resources director prior to be laid off during the pandemic. “I don’t want to be that family in the news where sixty people got infected.” Now, the family is on Plan C: A party on Aug. 8 in their spacious backyard in Valley Stream.

They expect to have fewer than 30 people, and each nuclear family unit will have its own table spaced at least six feet apart from others. The caterer is pre-plating individual meals; Mya will blow out candles on her own miniature cake and guests will have individually boxed cupcakes. They’ll have masks available for guests to don when they want to get within six feet of others. The family even renovated their deck to give Mya and her dad, Peter, 43, an executive chef, room for a father-daughter dance.

"I'm pretty excited because I've been wanting to celebrate," Mya says. "Since my mom has been very cautious, I'm still going to be able to celebrate but in a safer way."

Unicorns came to the rescue for birthday celebrations to mark Gia Providente of Massapequa's 4th birthday and Peyton D’Auria of Holbrook's 5th.

“We told my daughter we were going to surprise her and she was going to meet a magical creature,” says Layla Providente, 35, a school psychologist. Gia had a private encounter with a white pony dressed as a unicorn at The Little Red Barn in Jamesport, with professional photos taken by photographer Karen Haberberg. “They had the horn on the pony,” Providente says. Gia was able to ride her, groom her and put a bow in the pony’s hair, Providente says. “For us, this was just to do something peaceful and private. If it was a normal year, we probably would have had a birthday party with all her friends from school.”

A pony-turned-unicorn will also star in Peyton’s big day, as an addition to her car parade. “We went to almost 20 parades during this thing. Now that’s all she wants,” mom Erica D’Auria says. But afterward, those who choose to will be able to ride the “unicorn” and get an ice cream from an ice cream truck the family hired. “I’m very excited to see her reaction when this thing shows up at our house,” says D'Auria, a restaurant manager. “People are into it. They think it sounds fun.”