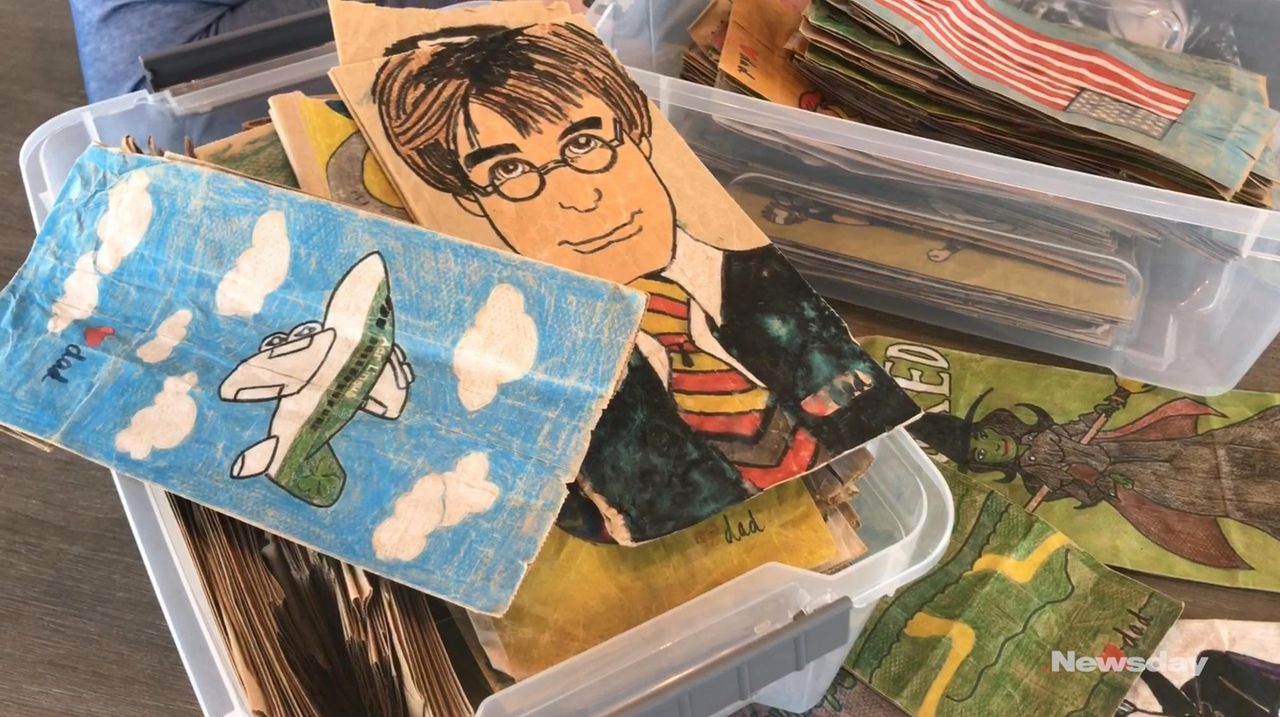 Patrick Murray of Wantagh has created a “snack-bag-of-the-day” for his daughter, Molly, 9, every day since she started kindergarten. She is now in third grade and they have more than 200 decorated brown paper bags. Credit: Newsday / Beth Whitehouse

Every morning before Molly Murray, 9, leaves for school, her dad, Patrick, draws his only child an elaborate picture on the brown paper bag she uses to hold her snack. He’s been doing it since his daughter's first day of kindergarten at St. William the Abbot Catholic School in Seaford, and now that Molly is in third grade, they have more than 200 bags featuring Disney or Dr. Seuss characters, Broadway musicals, famous buildings and more.

Each bag has a red heart at the bottom corner and is signed “dad.”

Molly loves what the Murrays have dubbed the “snack-bag-of-the-day.”

“It’s just nice waking up in the morning knowing my dad will draw one for me,” Molly says. Her classmates look forward to it, too, she says. “They always say to me, ‘What’s the snack bag today?’ ”

David Lo did the same thing for his son, Michael, 11, while Michael was in third through fifth grade at South Salem Elementary School in Port Washington. The Los’ tradition began because Michael, also an only child, had started a new school and was struggling to assimilate into the groups of kids who had known one another for years.

“When I was in third grade, on the first day of school nobody was wanting to talk to me,” Michael says.

Then David drew Charizard, an orange dragon Pokémon character, on Michael’s snack bag, and followed up with other Pokémon, as well as characters from “Star Wars” and the Angry Birds video games and more. “All these kids were starting to ask, ‘What’s your father going to draw next?’ It helped him in terms of kids talking to him,” David says. Adds Michael: “I feel like everybody likes me now.”

Michael’s mom suggested that they take a photo of each bag. “My wife said, ‘These are pieces of art. You should take a picture every time you make one so that they are preserved forever,’ ” David says. He started an Instagram called Mikeysnackbags, where his 59 followers can see images of most of the more than 280 bags he has drawn.

STARTED WITH A SMILE

Neither dad is an artist by profession.

Murray, 46, works from home running his own headhunting business. He says he filled up notebooks with cartoons when he was a kid, but “before I started doing this, I don’t think I drew in 20 years.”

Lo, 49, is a banker. “For me, it’s a stress reliever,” he says. “I just sit there and start drawing. I started getting a little bit crazy and obsessed with it.” Lo uses markers and Michael’s crayons.

Murray started by drawing a simple smiley face on his Molly’s snack bag on her first day of kindergarten in 2015. The next day, “I got a little fancy,” Murray says. A kitchen magnet in their house was a replica of a poster for the Broadway show “Wicked,” and he copied the image using colored pencils and crayons.

After weeks of pictures, “It just became a thing,” Murray says.

‘NEVER SEEN THIS BEFORE’

In many elementary schools, kids have a morning snack before the official school lunch break, and they typically, they eat the snack in the classroom. At Molly’s school, for instance, kids put their snack bags into a bin in their classroom and retrieve them later. Molly’s lunch is in a separate lunch box.

“It's amazing what he does on those bags,” Molly's third-grade teacher, Geri Acovino, says of Murray. Acovino has been teaching for 27 years. “All the years I've been teaching, I've never seen this before. Everyone really looks forward to it.”

Many parents write notes that they put in or on their kids’ snack or lunch bags. “It kind of gives their children that virtual hug they need when you send them to school and you’re not going to see them until the end of the day,” says Moira Kochis, a social worker in the Middle Country School District, in Suffolk County.

Drawing the pictures goes a step beyond. Because snack time is unstructured, kids tend to wander into groups of friends, says Laurie Zelinger, a child psychologist in private practice in Cedarhurst and a former elementary school psychologist in the Oceanside School District.

“If you’re in any way socially uncomfortable, this is like a sentence starter if you don’t know what to say to somebody,” Zelinger says. “It helps them over the hurdle of beginning a social interaction. It brings other children closer to you because they want to see it, and they want to discuss it. It’s a conversation starter.”

Each picture takes 30 minutes to an hour to complete, both Murray and Lo say.

Lo planned his drawings with Michael the night before and executed them then. Michael would choose something from his Pokémon catalog or look up an idea online that David could copy. Sometimes David would balk. “Are you kidding me? This one is too hard,” he might say. Or “I’m so tired of Pokémon. Can we do something else?”

Now Michael is in middle school at St. Peter of Alcantara in Port Washington, and they don’t have snack time, so the drawings have dwindled.

“Mikeysnackbags might go out of business,” Michael says ruefully. David will still draw pictures for Michael if they have a school field trip, however. Recently he drew a picture from the new release of “How to Train Your Dragon: The Hidden World” when Michael’s class took a trip to the National Museum of Mathematics in Manhattan.

Michael tries to bring the bags home with him to save in a plastic storage bin, and he’s mostly successful. But sometimes they get crumpled or water spills on them. “Whenever I have holes or rips in them, I just throw them out. But it’s always still there on Instagram,” Michael says.

Murray doesn’t plan his drawings in advance, he says. “I do them every morning at 5 . . . Thank God for coffee,” Murray says. “I kind of created a monster with this. I was pretty happy when summer rolled around.”

Sometimes Murray is stuck for an idea — that was the case, for instance, when one day he resorted to drawing the box of Crayola pencils he uses to create the artwork.

“Anything is fair game,” Murray says. Whenever Molly’s mom, Candice, who works in global business development for a photo agency, travels for work, the bags that week will revolve around wherever she is.

“My favorite one he just drew yesterday,” Molly said one day in February. It’s of a van with a surfboard on top and palm trees behind. “My mom, she’s away in California on a business trip, and he did all sorts of things about California and Hollywood. Anytime she’s away, we’ll send her a picture of me and the snack bag of the day.”

Says Candice: "I love it. It just keeps us close as a family." Molly also brings her snack bags home from school each day to save.

In the beginning, the surprise of the pictures helped get a sleepy kindergartner up for school, Murray says. “It was a way to get her out of bed. ‘Hey Molly, you want to see the new snack-bag-of-the-day?’

“That worked for a while. It doesn’t work that well anymore,” he jokes.

The snack-bag-of-the-day tradition may organically come to an end next school year because once the pupils at St. William the Abbot reach fourth grade, there’s no snack time.

“People ask me what I am going to do with these things,” says Murray, who keeps the bags in two plastic bins. “Here’s what I think would be a cool idea.” In a couple of decades, he says, when Molly has a son or daughter, her children can reuse the bags made by Grandpa.

24 new places for kids, parents on LISome of the most recent, family-friendly spots that opened on LI. LI restaurants offering fun experiences for kidsGo to the carnival, climb aboard a bus or pet a kitty -- all while you eat. 50 best places for families on LIFind out where LI parents love to take their kids.