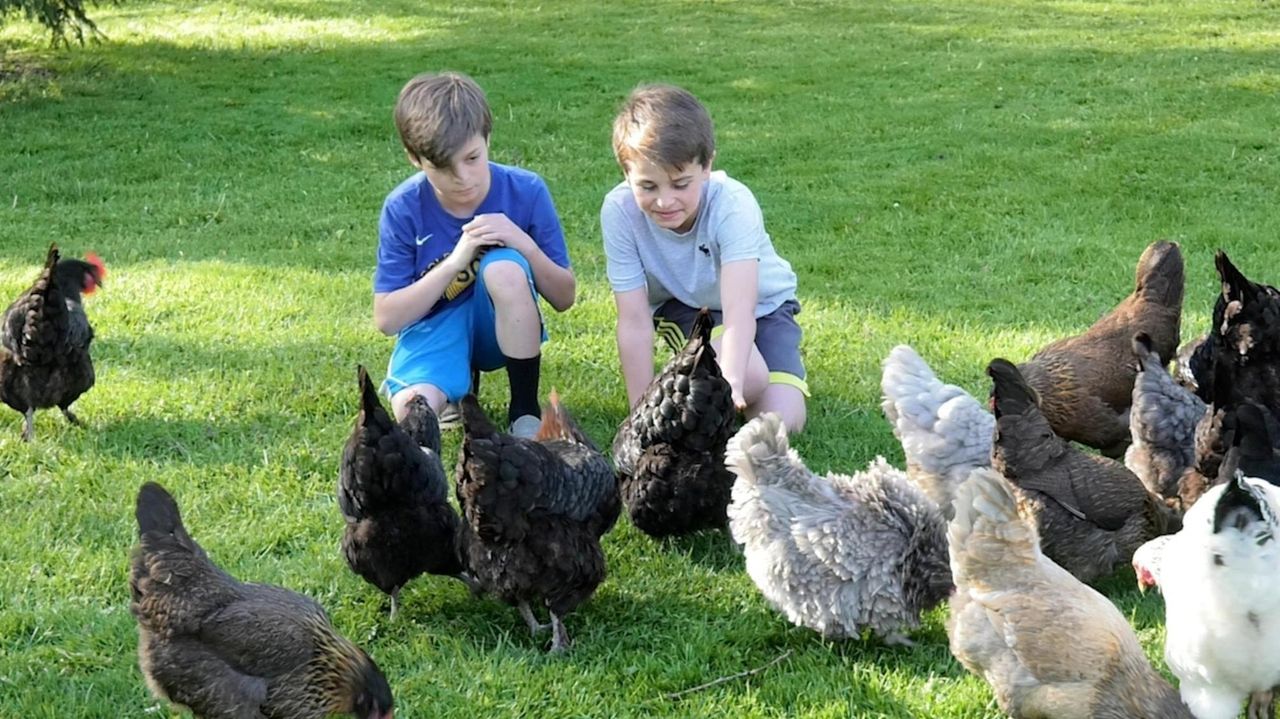 The Vardaros of Bayport grow vegetables such as cucamelons, purple tomatoes and pink pumpkins that has their kids interested in trying different foods. They also raise chickens, which produce about 18 to 24 fresh and colorful eggs daily.  Credit: Newsday / John Paraskevas

By Arlene Gross Special to Newsday Updated May 9, 2019 6:00 AM
Print
fbShare Tweet Email

If your child would be disappointed that her hamburger came with fries instead of a salad, then read no further — what follows are secrets from Long Island parents who have raised their children to eat well and enjoy it.

Grow produce at a community garden

HOW TO DO IT Jennette Watt, 46, a nurse from Roosevelt, grows tomatoes, peppers, arugula, bok choy, thyme and basil at the North Shore Land Alliance’s Roosevelt Community Garden. This year, Watt has three plots that her four sons, ages 10 to 19, help her cultivate. Besides wanting her children to eat healthy foods, Watt says she, “wanted the kids to see where the fresh vegetables come from. I wanted them to grasp the concept that it’s OK to get your hands in the soil.”

Nurturing and watching radishes germinate from seeds was an awe-inspiring experience for son Charlton, 12, she says, adding that all of her children are more open to trying a lot of different vegetables.

ADVICE Often, people learn through seeing and doing, Watt says. “I would encourage any other parents who have young kids to take their kids to the garden. I believe in the practical, hands-on part of things. Get your kids out there, get them involved. If parents practice it, kids will definitely follow.”

Live off the land

HOW TO DO IT Jeannine Vardaro, 51, of Bayport, says she found that growing interesting looking vegetables, such as cucamelons (lime-flavored cucumbers), purple tomatoes and pink pumpkins got her kids interested in trying different foods. Vardaro, who has a 23-year-old daughter and sons, 24, and 12-year-old twins, also raises chickens, which produce about 18 to 24 fresh and colorful eggs daily. Noting that fresh eggs taste better and are more nutritious, Vardaro says, “I could never eat an egg from the store. There’s no comparison.”

Vardaro, a stay-at-home mother who started her garden because she saw her own mother grow tomatoes, says all her kids are healthy eaters. “We’ll make our own yogurt and homemade ice cream. We never bought a bottle of soda.”

ADVICE Kids who start out eating bland commercial baby food don’t develop a good palate, says Vardaro. “I think they have to start out and have fresh herbs and things that are different from the beginning. And, then, their taste buds are not thrown off when they’re older.”

Set an example by eating clean

HOW TO DO IT When her daughters, now 12 and 6, and sons, 10 and 3, were babies, Katherine Arita, 36, of Mount Sinai puréed fruit to make her own baby food. As the children grew up, mom and kids cooked  together and prepared healthy snacks such as fruit salad and homemade kale chips.

“In my house, you eat what’s on the plate,” says Arita, an office manager. “I’m not going to force an entire plate of it, but you will have a small portion. And, ‘try it’ is the thing we always say — especially if they want dessert.”

Her husband grew up drinking lots of soda, which is now banned from their household. “It was a drastic change,” says David Arita, 36, a sheet metal union technician, of living in a soda-free home. “We’re big believers in behavior being learned,” adds David, adding that they also limit the children’s intake of juice.

ADVICE Kids model themselves after their parents, says Katherine, who used to make smoothies for herself and the kids. “Now my twelve-year-old loves to make shakes and she’ll make shakes for everyone,” Katherine, says noting that her daughter will even add kale and spinach to the medley of fruit.

HOW TO DO IT Eva Brush, 28, of Patchogue, who has a 2-1/2-year-old daughter and 1-year-old twin boys, says she makes the family's own yogurt and apple sauce. Her daughter will help with cooking dinner and also likes to make and eat kombucha. “She’s there. She’s with me," says Brush, who owns an organic skincare company. "She’s cutting the stuff with me — with my assistance — watching it cook, and seeing, ‘This is what I created.’ She’s never had a problem when it’s a meal she made. I think it’s a huge part of it.”

ADVICE Lead by example, says Brush. “They’re going to want what you have.” Brush also advises eating together as a family. “If we’re sitting down and eating with them, and eating the same thing, they will eat it. No mac and cheese or chicken nuggets here.”

HOW TO DO IT Caitlyn Wilbert, 9, eats well because her mother got her to eat well before she had a choice, says Lauren Wilbert, 44, a high school biology teacher who lives in Commack.

“It’s just a long-standing history of good eating habits and exposing her to a variety of different foods from the time she was a toddler,” says Wilbert.

When she and Caitlyn were out at a restaurant about four years ago, Caitlyn got very upset that her burger came with fries instead of salad, which amused an older couple sitting nearby, recalls Wilbert, “because when do you see a little kid who’s crying because they got fries instead of salad?”

From the time she was young, Caitlyn ate a variety of adult foods, such as quinoa, squash and zucchini, and now eats everything, Wilbert says. “She has a very sophisticated palate.”

ADVICE When introducing foods to your kids, expose them to as wide a variety of options as possible. “It’s really about exposure,” Wilbert says. “Sometimes I know it’s faster and easier to just make the chicken nuggets. But you have to think of the long-term effects of those kinds of eating habits and starting them off right from the beginning."

HOW TO DO IT When her son Austin, now 5, was diagnosed with various food allergies, including dairy and sesame, Virginia Lawther, 38, a book production manufacturing manager who lives in Baldwin, says, she “was determined to not have a picky eater because I already had so many restrictions.”

Lawther subscribed to baby led weaning, where children feed themselves as soon as they're weaned, eating what their parents are eating until they’re satiated. “You’re also letting the kids pick up the foods with their hands and just kind of explore,” Lawther says. “It’s very messy, but they end up having a much wider palette.”

Lawther lets Austin and his brother, Lexington, 3, help out in the kitchen, where she makes her own jams and jellies. Neither boy liked mashed potatoes, until they actually helped make them. “They like being involved. They want to feel like, ‘Oh I contributed,’” she says.

Lawther says she makes a point of having family dinners where they’ll talk about their day and discuss the foods they’re eating. “Dinner time is the time to connect,” she says.

HOW TO DO IT “It was a struggle in the beginning,” admits Rebecca McDonald, 50, of Nesconset, referring to getting her five daughters, now 12 to 30, to eat different foods. “They’d look at something and be like, ‘Ew, that looks gross!’ and they wouldn’t try it.”

McDonald made a chart and then made a deal with her kids. “If you try a new food that you never tried before, you get a point,” she says. After any one of her kids got 10 points, they’d get a special night out with mom. They’d check the chart before dinner to see if they were having something new, hoping for an opportunity to gain points.

Today, her daughters are all adventurous eaters, McDonald says.

ADVICE When the kids are young and outside of the house, they may be influenced by what friends are eating. “Having good habits at home is really important, but you also have to prepare them that those things aren’t always going to be available," she says. "If you go someplace and there’s a healthier option, they may go for it.”

7 best LI playgrounds worth the driveThese parks offer more than just swings and slides. 5 unique LI day trips for families Here are a few ideas for thematic day trips guaranteed to please the whole family. 50 best places for families on LIFind out where LI parents love to take their kids.