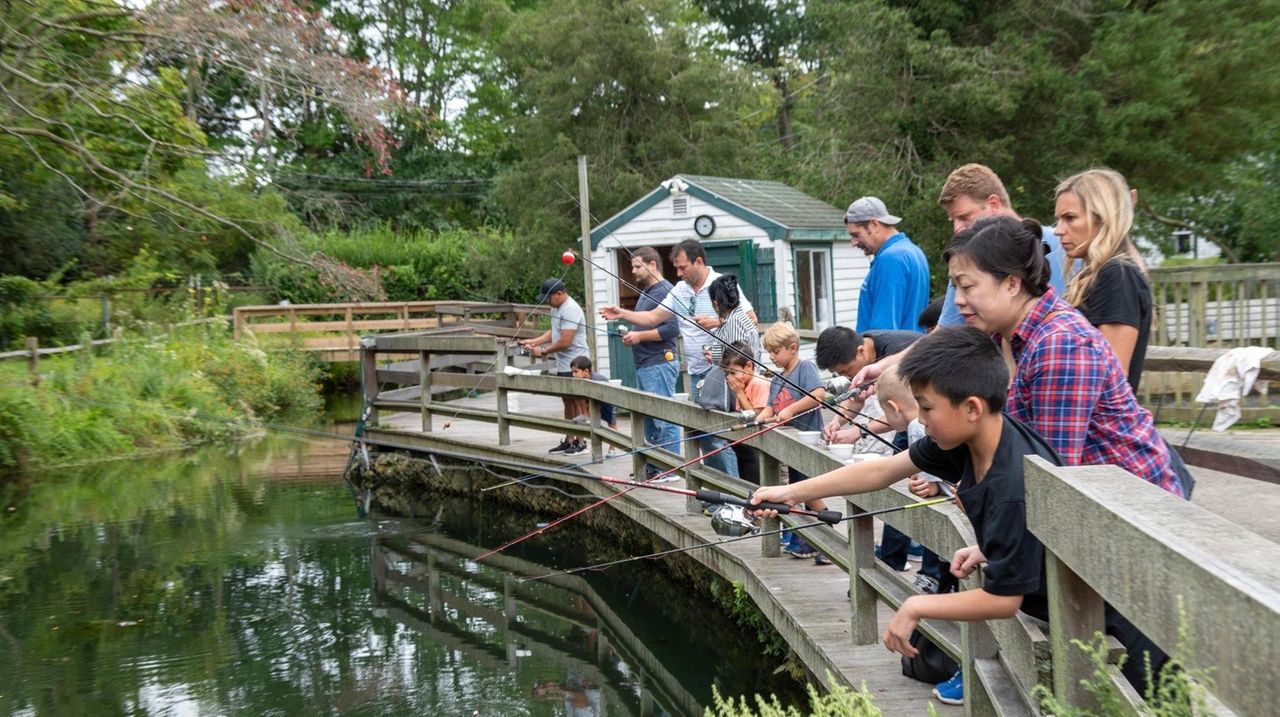 Sometimes you need to stack the odds. You can hook a kid on the sport of fishing at the Cold Spring Harbor Fish Hatchery & Aquarium, where there's a high likelihood your little one won’t go home empty-handed.

“This is really designed for someone who’s never caught a fish before,” says Steve DeSimone, hatchery director. “It’s not quite shooting fish in a barrel, but it’s as close as you can get.”

Each week, the hatchery stocks a small pond with about 200 adult rainbow and brook trout from 11 to 16 inches long, and visitors fish from a wood dock hugging the perimeter of the pond. As many as 12 families can fish at once, at numbered spots.

“My son had a great time. We caught two fish. We brought them home; his grandmother ate them,” says Jack Hourigan, 39, a residence manager from Manhattan who experienced the fish hatchery one recent Saturday with Jack, 4, and Jack’s grandfather, Nigel Bennett of Queens.

Here's what parents need to know when visiting the fish hatchery:

Get there a bit early. “We don’t take reservations. It’s on a first-come-first-served basis,” DeSimone says. While sessions don’t usually sell out, they can fill up on popular summer days, he says.

You may get messy. “Don’t wear your Sunday whites,” DeSimone says. The fish might bleed when caught.

You’ll be dropping a line. The hatchery rents cane poles; some people do bring spin-cast reels, “but it’s not like there’s a tremendous amount of space,” DeSimone says. Also, there’s no need to cast far to get your bait to the fish, he says.

You have to put a live worm on the hook. If your kids (or you!) are squeamish, you can bring dough balls to use as bait instead, DeSimone says. Staff members are on duty to assist.

You must keep the fish you catch. Families must pay $4 for each fish caught — and bring them home. DeSimone suggests bringing a cooler with ice or ice packs, or the hatchery can supply plastic bags and ice for transport.

You’ll be having fish for dinner. “They both caught fish and couldn’t wait to get home and eat them,” says Frank Nofi, 65, a salesman from Levittown who took two grandchildren, Tyler, 8, and Samantha, 6, to the hatchery when they were visiting from Connecticut. While the kids changed their mind about eating the fish when they saw the bones, Nofi says, “my wife and I made fish cakes out of them. They were delicious.”

In addition to fishing, visitors can check out the other outdoor ponds where the hatchery matures younger fish — bring quarters to buy fish food in case the kids want to feed them. “It’s a great place for the kids to run around and explore,” says Erin Betito, 36, a teacher from Queens who visited recently with her two sons, Sebastian, 5, and Theodore, 3.

And duck into the indoor aquarium buildings, which house local animals native to New York State. The tanks hold fish including a Creek Chub, Eastern Mudminnow and Black Bullhead. A big hit with the kids are the turtles, including the Eastern Mud Turtle, a Spotted Turtle and baby hatchling turtles. Other tanks hold salamanders, snakes and frogs.

Be forewarned — a gift shop offers items including plastic fish or turtles for a couple of dollars each to a stuffed plush rainbow trout for $16. Snacks, ice cream and water are also available for purchase.

TO FISH Two-hour fishing sessions start at 10 a.m. and 1 p.m. Fridays through Tuesdays year-round. There's a $5 fee to fish, plus $4 per catch (fish caught may not be released). Visitors can bring their own poles and/or bait or rent them for $2 per pole and $2 for 12 earthworms.

WHILE YOU’RE IN COLD SPRING HARBOR

After a couple of hours of fishing, make a day of it by visiting these other family-friendly venues:

ADMISSION $2 per adult (free for kids)

The museum, housed in Cold Spring Harbor’s historic first fire house, highlights the department’s past including an 1852 Hand Pumper, a 1923 Ford Model TT Chemical Truck, and a fire-engine red American LaFrance Engine that served Cold Spring Harbor from 1939 to 1965. Kids are welcome to sit on the 1923 truck. Other memorabilia include buckets used in old bucket brigades, fire fighters’ helmets and a fire-house fire-pole firefighters used to descend quickly from their bunks on an upper floor to the trucks.

The Whaling Museum and Education Center

The newest exhibit at the center just opened – called “Big Boned,” it examines whale adaptations. Other exhibits at the museum include “If I Were a Whaler,” which immerses visitors in the historical world of whaling, with a facsimile of a ship’s bunk, a hands-on miniature sail they can raise and lower, and a place to swab the deck.

The Nassau-Suffolk Greenbelt Trail starts here and extends to Bethpage State Park, but no need to walk that far. Families often hike the hilly, shaded trail one way and then turn around to come back to the parking area. There is a bathroom along the trail near the Cold Spring Harbor Library (which also has a children’s room upstairs with couches, toys and puzzles).

Step into the Gourmet Whaler for ice cream cones in flavors including “I Scream for Cake” and “Campfire S’mores;” Mom and Dad may prefer an iced caramel latte. Kids also like the candy corner toward the rear of the restaurant, with flashing colorful lights, a carousel pig and lion (no sitting on them, please!) and shelves with candy including Pop Rocks and Swedish Fish. The store offers some vegan and gluten-free snacks as well. Gourmet Whaler also has tables indoors and out for meals including tacos, wraps and sandwiches; kids’ menu choices include grilled cheese, chicken tenders, even fried clams. Pancakes are served all day on Sundays.