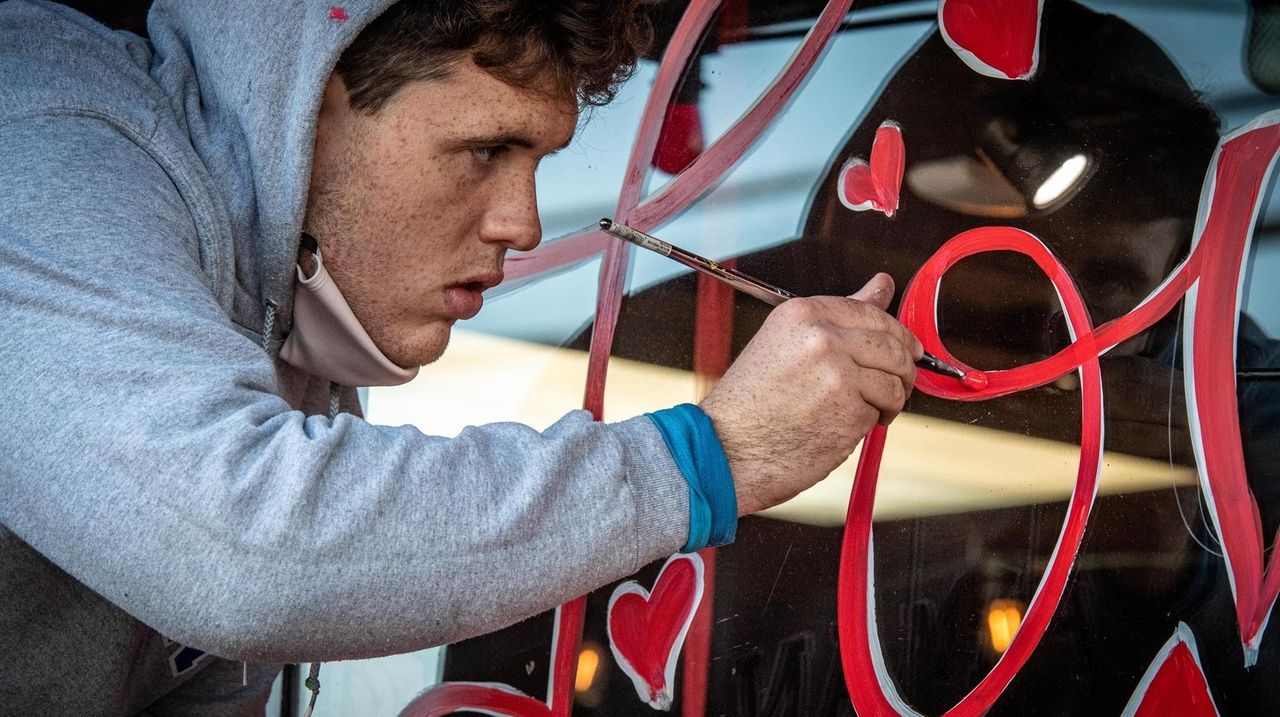 Michael Foley, 21, of North Massapequa, is an art major who has been painting doors as a side hustle during his winter break from college. Credit: Newsday / J. Conrad Williams Jr.

When one door closes, another door … gets painted?

Michael Foley, 21, of North Massapequa, a senior art student at Furman University in Greenville, S.C., spent fall semester on Long Island, attending class remotely. But when the term wrapped, he was in the same boat as many other college students who faced a long winter break, as many colleges have stretched the typical time off this year from Thanksgiving into February to lessen students’ COVID-19 exposure on campuses. Foley felt like he had to do something worthwhile to fill the time and earn some money.

He had wanted to do a formal internship, but that door closed as opportunities had dried up due to the pandemic. Then a friend’s parent asked, "Can you do window painting?" She hired him to create a snowman on her window. Foley started advertising on social media to paint other people’s windows — and also their storm doors — with celebratory scenes, and a side hustle was born.

He’s not the only college student who is taking advantage of a longer than usual time at home to earn some extra cash. Here is more about Foley, and four other students using their time well.

Foley started out painting holiday scenes. "I did the Grinch, I did Buddy the Elf." Now he’s moved on to doing birthdays. "It kind of snowballed," he says of the venture. "It’s something that honestly made being home worth it. It makes people so happy, and it also made me really happy."

He treats doors and windows like a canvas. "It’s really a simple process. I use regular house paint that you would use to paint walls." He’ll also return to take the paint off for customers. "The thing about house paint is it usually just peels right off," he says. It doesn't leave residue on the glass, he says.

He typically charges $130 for a storm door or window, and he’s earned a little over $1,000 since he began in December. It takes him about 2 ½ hours to create a scene. Foley is scheduled to head to South Carolina for spring term and graduation on campus, but he’s tempted to opt to stay home and continue classes remotely so he can keep painting doors for Valentine’s Day and other upcoming special occasions. "I actually really enjoyed it, especially as a side hustle," he says. Foley shares his artwork on his Instagram, @artbymichaelfoley.

Jazmyn Martin, 26, is a senior at SUNY Old Westbury studying sociology. She started her own cosmetics business in 2019 called Pretty Gang Cosmetics, and the long break this winter has allowed her to rebrand the business and focus on choosing and expanding her staple products, she says.

She started making more of her own skin care products, including body scrubs, lip balms and lotions. They include, for instance, "Foaming Salted Caramel and Pumpkin Body Scrub" for $5 for 4 ounces and $10 for 6 ounces; and "Pretty Boy Beard Balm" for $10 for 2 ounces. She says she's earned about $1,000 during the pandemic.

"I took the time to look into what each ingredient does. The time and effort I was able to put into my business made a big difference." Martin also was able to host a socially distanced pop-up event in December, she says, in addition to managing her website, pgcofficial.com.

It’s not entirely clear how Jeff Gier became "Hot Jeff," with customers chanting his name at the bar of the Coach Meeting House in Oyster Bay, and the restaurant advertising home delivery by "Hot Jeff."

Gier, 19, an economics and Japanese studies major at Gettysburg College in Pennsylvania, jokes that it could be his looks or because part of his job is to replace the propane that powers the restaurant's fire pits. The nickname has taken on a life of its own since November, when Gier returned from his sophomore year at Gettysburg early after the campus sent upperclassmen home due to the COVID-19 outbreak. He’s even had people stop him on the street, excited to meet him.

Gier works seven days a week at the restaurant and earns about $500 a week including tips. "It’s going straight to student loans, I’m not spending any of it on myself," he says. The nickname has been fun. "I’m enjoying it, I can’t lie," he says of the local notoriety. It will come to an end — at least temporarily — at the end of the month, when upperclassmen will be allowed back on campus and Gier returns to Pennsylvania.

BRIELLE NEUMANN HAS YOUR UBER EATS

Brielle Neumann, 20, is a junior majoring in human development at Binghamton University. Although classes were online in the fall, she went back to school anyway and attended from her off-campus apartment. When she came home to East Northport for winter break, she wanted to stockpile some money.

She considered babysitting or walking people’s dogs but was concerned about the ability to do those things and still social distance. Driving for Uber Eats seemed like it could meet her needs. "Let me just try it," she says she thought. According to Uber, thousands of Long Islanders have signed up to do the same since the pandemic began.

She’s able to wear a mask, she doesn’t touch doorknobs, she picks up food and drops it contactlessly on people’s doorsteps. "Sometimes I deliver to my friends’ houses and they don’t even know it," she says. She works about 15 hours a week and makes about $200 a week, she says. While she’s making deliveries she’ll listen to music or podcasts. "It’s a win/win for me," she says. "It pays out super well." She plans to keep going until she returns to school at the beginning of February.

MYRKA ARGUETA, AT YOUR SERVICE

Myrka Argueta, 19, of Brentwood, started working at Homesense, a home goods store in Commack, in October and since the week before Christmas, has been putting in about 35 hours a week. "I have to pick up as many hours as I can," she says. She earns about $250 per week.

Argueta, a sophomore at St. Joseph's College in Patchogue, is studying criminal justice and hopes to be a probation officer like her older brother. But meanwhile, she needs money for tuition and textbooks. "It wasn't going to be easy to grab money out of nowhere," she says of why she's been happy to work as much as possible while she had the time. She earns about $250 per week.

She'll likely cut down her hours once classes start again. "I'm a person is who is very interested in school. I don't think I'm going to have as many hours to work."