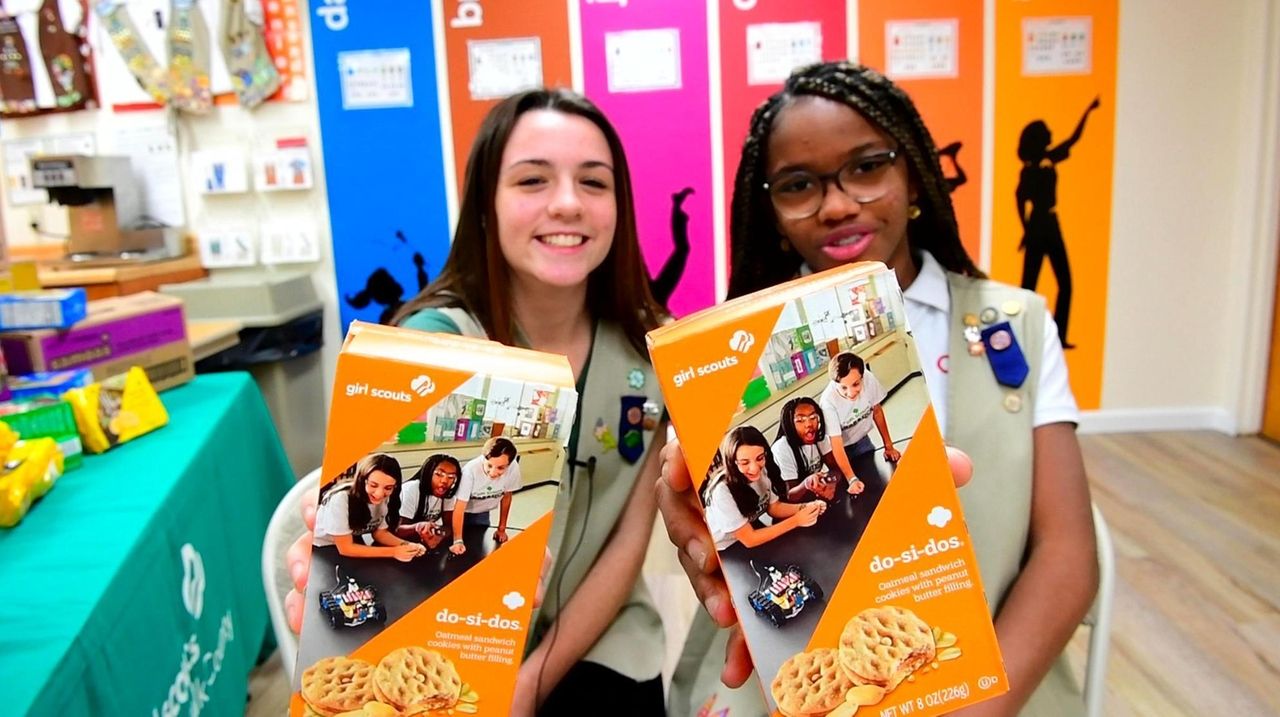 Girl Scouts Ava Mahoney, of Commack, and Olivia Phillips, of Mastic, both of whom appear on this year’s Do-Si-Dos cookie box, will be among hundreds of Girl Scouts and parents who will spend the night at Smith Haven Mall in a rally to kick off cookie selling season. Credit: Newsday / Thomas A. Ferrara

When Ava Mahoney heads to the Smith Haven Mall on Friday night, she’ll be toting an air mattress.

Mahoney is one of close to 2,000 Girl Scouts and parents who will stay overnight at the mall during the Girl Scouts of Suffolk County’s fourth annual Cookie Palooza sleepover.

Of course, that air mattress assumes Mahoney will get any shut eye during the extravaganza that is the kickoff of this year's Girl Scout cookie season. From the time the girls arrive at 9:30 p.m., more than 25 stores and food court vendors will stay open and offer sales promotions such as free hand massages and mini facials, a LEGO mini build set giveaway and more. At 1 a.m. in the mall’s center court, staged events will launch the girls on the selling season, which continues through March. And then there are activities such as crafts stations to make decorations for cookie selling booths, cookie tastings and more.

Mahoney, a 14-year-old high school freshman from Commack, has a special role in this year’s Cookie Palooza — she and fellow Girl Scout Olivia Phillips, 12, of Mastic, will take the stage during the rally.  The duo appears on this year’s Do-si-do cookie box in a photo of them participating in a robotics scenario.

“We’re going to talk about the experience of being on a cookie box,” Mahoney says. They are the only girls from Long Island to appear on the new nationwide cookie boxes.

Phillips says she hopes her autograph might help market the thousands of boxes she alone sells each year. “I might sign a few boxes,” she says. People would be able to boast, “I met the girl who’s on the front of this box.”

Lemon-Ups join the lineup this season; the round, crispy, lemony shortbread cookies are embossed with affirmations such as “I am a leader” or “I am bold." The new treat replaces the former lemon offering in both Nassau and Suffolk counties; Savannah Smiles has been retired. The Lemon-Ups join a lineup of seven additional choices including Thin Mints (the Girl Scouts’ most popular cookie), Samoas, Tagalongs, Trefoils, Toffee-tastic (gluten-free), S’mores and Do-si-dos.

The Girl Scouts of Nassau County also has a kickoff to get the girls motivated to sell; their rally was Jan. 11 at Uniondale High School. The Suffolk County council expanded its launch to an overnight in 2017; tickets are $20 per person and the event has been fully booked since October. “It sells out in minutes,” says Jenna Kierstedt, director of sales and marketing for the Girl Scouts of Suffolk County. The Girl Scouts are the only group that Smith Haven Mall partners with for this type of grassroots activity, according to a mall representative.

This year’s rally has a theme of “WOW the World,” with a butterfly as a mascot. Each person attending the event will get a pair of wearable fairy wings, Kierstedt says.

“I love it,” Phillips says of Cookie Palooza — she’s been to the past three overnights and is hoping that at this one she’ll be recognized by other scouts. “I’m going to be walking around the mall and they’ll be like, ‘Aren’t you on the Girl Scout cookie box?’ It’s going to be so weird.”

Phillips and Mahoney — who are in different troops and didn’t know each other before their robotics photo shoot in New Jersey — both applied for the opportunity to be featured on a cookie box, answering questions about their participation in scouting. They plan to do some selling together on Long Island in the coming months.

But for now, they’re focused on the night at the mall. “Me and my friends didn’t sleep. We stayed up all night,” Mahoney says of last year’s event. She expects this year will be the same.

“Your making memories. It’s a great thing,” says Phillips’ mom, Kim Mitchell-Phillips, who is also her daughter’s Cadette troop leader. She says the parents are prepared for an all-nighter as well. “There’s a Starbucks in there and the line is wrapped around the corner, because everybody wants coffee,” the elder Phillips says. Eventually the girls do get a little bit of rest before their 6 a.m. departure on Saturday, she says: “They do fall asleep — about 10 minutes before they have to leave.”