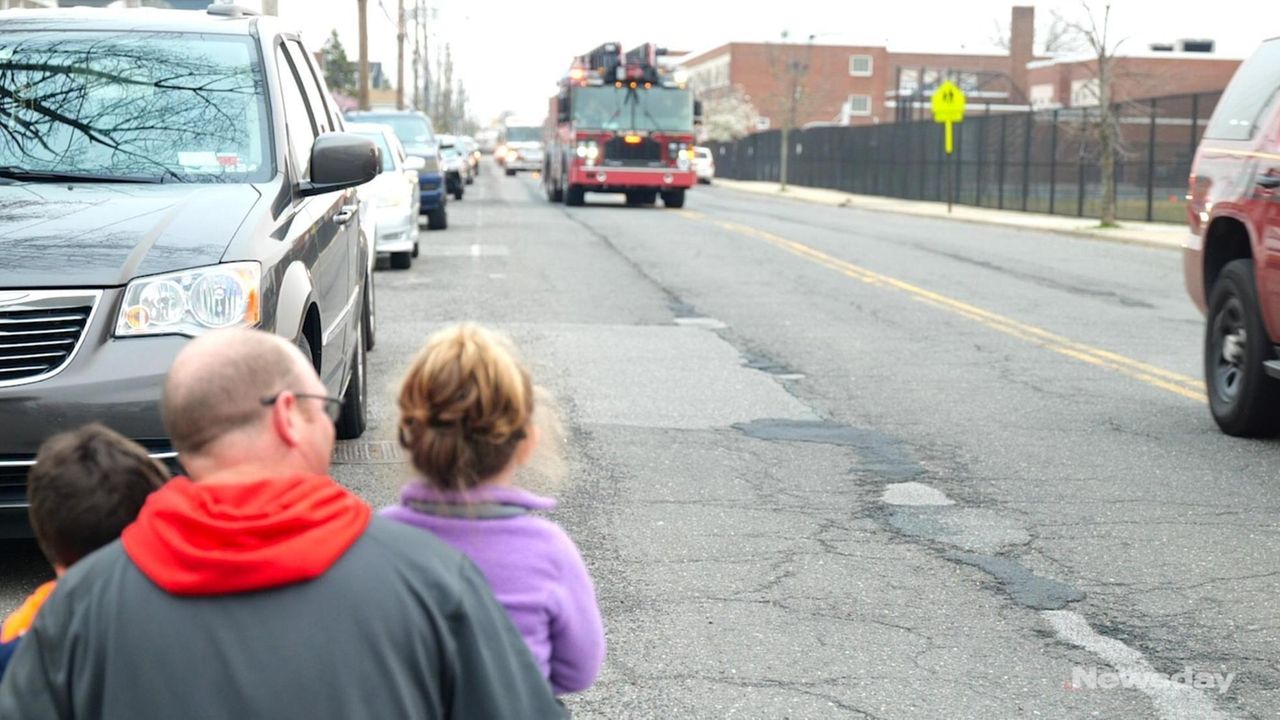 The Island Park Fire Department drove past the Whaley family home to surprise their daughter with a special birthday gift, after her party was canceled due to the coronavirus.  Credit: Kendall Rodriguez

Vincent Buckley of Levittown turned 7 on April 5. He was looking forward to a Game Truck party, but the coronavirus led to a change of plans.

“I think he’s still in disbelief it’s canceled,” his mom, Barbara Buckley, 38, said before his big day. Buckley is a stay-at-home mother to five children between the ages of 1 and 8.

Birthdays are especially important to Vincent because with four siblings, it’s rare that a day is devoted entirely to one of them. But Buckley didn't give up on making the day special — like many other parents are doing, she arranged a drive-by car parade of friends and relatives to surprise him.

But how else can parents make sure their kids’ birthdays are fun during this era of social distancing? Here are ideas from some other Long Island families:

DRESS UP IN COSTUME — YOURSELF

Michelle Iavarone, 42, a teacher from Plainview, planned to have her daughter Emily’s 4th birthday party at Once Upon a Treetop in Plainview on May 3. “We were supposed to have the whole big ‘Frozen’ theme. We were going to have visits from Arendelle.”

Instead of disappointing Emily, her parents ordered Anna and Kristoff costumes for themselves from Party City. They even ordered an Olaf costume for their dog. “He’s not going to like it, but if we can get one picture of him sitting still, that will be amazing,” Iavarone says. Emily will dress as Elsa.

Iavarone also reached out to a company that does videos for kids and ordered a personalized video of Anna and Elsa for Emily. And they’ve ordered a specialty cake from The Cake Don in Carle Place, “just to have something extravagant,” Iavarone says. “What can we really do? We’re doing the best we can with as little as we can,” she says.

LOAD UP ON CRAFT KITS

Jennifer Cordeau, 41, of Massapequa, who works in corporate communications, and her husband, Spencer, 39, a high school teacher, face a double whammy in April — their daughter Reagan turns 8, and daughter Madison turns 6.

First up is Reagan, whose party was supposed to be a movie showing of “Onward” at the Bellmore Playhouse. Instead, Jennifer has been ordering craft kits offered by local businesses so she can stagger entertaining activities for the family throughout the day.

Reagan’s day will start with a pancake breakfast, there’ll be a drive-by parade of friends from her Girl Scout troop at noon, and Reagan has requested a Slurpee, so Dad will do a 7-11 run for that, Cordeau says.

They still haven’t nailed down a plan for Madison's big day.

Zaria Canizares, 9, of Farmingdale, is a Tim Burton fan. Her 10th birthday party — her big day is April 13 — was supposed to include a limousine ride into Manhattan for a meal at the Beetle House, a themed restaurant inspired by movies such as "Beetlejuice" and "Edward Scissorhands."

Instead, her mom, Yocana Orange, 41, who runs Double Dutch programs in local schools, and her dad, Juan Canizares, 44, a teacher, have arranged a Zoom party that will include family from Texas, Maryland, even Panama. “A lot of these people have never celebrated her birthday with her because they live so far away,” Orange says. “I’m calling it a Wi-Fi party.” They ordered a cake from Isabella's Creations in Brooklyn decorated with TikTok and Facebook symbols.

Zaria is taking the change in plans in stride.

“I was pretty disappointed, but I knew it was coming ever since the coronavirus started,” Zaria says. “It’s much safer because nobody wants to get sick. And I get to see family I haven’t seen in a long time.”

Tara Whaley, 34, of Island Park, who sells Pampered Chef, had to cancel her daughter Callie’s 4th birthday party. “I felt bad for her. She’s 4 so she doesn’t understand,” Whaley says. “We surprised her with a kitty.”

Whaley and her husband, Billy, 35, a laborer in Manhattan who just lost his job due to coronavirus, had been contemplating getting a pet anyway, and they felt the timing was right. “Let’s add some more joy to the family,” Tara says.

The family, which includes Dakota, 8, made an appointment at Worldwide Puppies and Kittens in Bellmore. They chose an orange cat and let Callie pick the name. She chose Summer.

In addition, Billy, who is a volunteer firefighter in Island Park, arranged a fire truck parade past their home on Callie’s birthday, March 30. “She was happy, she was jumping up and down,” Tara says.

Max Stolove turned 10 on March 27. Mom Joanna, 42, a geriatric social worker from Great Neck, had to cancel the party they were planning to have in their home.

Instead, she created an outdoor scavenger hunt for Max with 10 clues for his 10th birthday. “I got up at 5 in the morning," to plant the clues she says.  After Max woke up, the whole family went on the hunt — that included Dad Marc, 45, a creative director, and Gabriella, 7. “It was exciting," she says. "At the end, he got to open one of his presents.”

Another surprise: Max’s fourth grade teacher called. She also had each student in the class make a Google slide for him and sent them in a slideshow. “When his teacher called, Max said, ‘That never would have happened if it wasn’t for the coronavirus,’” Joanna says.