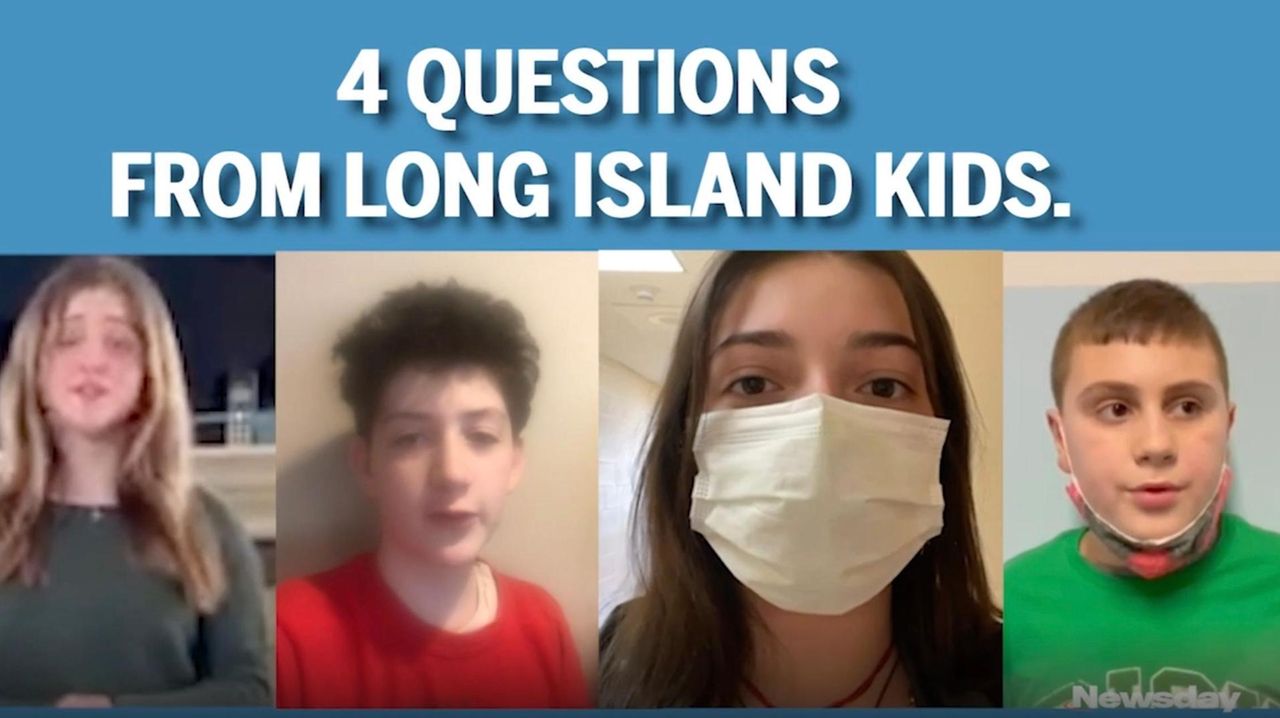 Seventh-grader Alexa Addonizio of Merrick has some questions for Long Island doctors.

"I was wondering what’s stopping them from testing the [COVID-19] vaccine on children," the 12-year-old says. "And will it be different from the side effects of adults?"

One year into the COVID-19 pandemic, kids and teens across Long Island are still wondering where the coronavirus came from and how masks can keep us safe. They’re also now curious about the vaccine, and how it might affect them.

Alexa’s mother, who’s a teacher, has been vaccinated. Alexa currently goes to school in person five days a week, which she says is optional in her district. But she prefers to be learning and interacting with peers face-to-face.

"I would be scared to get it but it’s probably like any other vaccine," Alexa says. "I wouldn’t want to be the first person to get it."

This week, New Yorkers ages 16 and up can begin to book appointments for the COVID-19 vaccine, state officials announced. To give kids like Alexa some answers, Newsday collected questions from youth across Long Island.

Here's what they wanted to know.

“Will there be a vaccine for kids under 20?”

"When will kids start to receive the vaccine, and is it safe?" — Ryan Karis, 12, Merrick

As long as you meet New York State’s eligibility requirements, Nachman says, "kids over age 16 can already start getting the vaccine." She adds that studies are still underway, and she hopes that by this fall, people between the ages of 12 and 16 will be able to get vaccinated.

“Why can’t kids get vaccinated with the same vaccine as adults?”

"It’s not that you can’t get the same vaccine, it’s the approval for the different age groups for these vaccines," says Syed. She says throughout clinical trials, they often start with healthy adults. As the trials move through different phases, the ages of the testers expand.

"Children are usually not included in the first phase of trials," she says. "But Pfizer did include teenagers 16 and up in their trials."

Syed adds that Moderna has started enrolling children from the ages of 6 months to 11 years in their trials, so we’ll have even more data soon. "It’s just a matter of time, really."

"When the vaccine comes out, will it be required to take in order to go to school?" — Karina Borisova, 17, Hampton Bays

Sood says it’s up to the state, but he thinks it’s unlikely. "In New York State, they do require most vaccines to be administered before you can attend school, even kindergarten," he says, later addng, "I would say given the fact that current [COVID] vaccines are not mandated to anyone, it’s quite unlikely."

“Will we still need desk barriers and masks next year?”

"How long will it take to get most of the kids vaccinated?" — Alexa Addonizio, 12, Merrick

That’s hard to know, says Sood. He estimates that it may take at least two years, and that it’ll be a gradual rollout like we’re seeing now with adults getting the vaccine. "Ultimately, we want to give it to infants so that basically, like with measles or chickenpox, they just grow up to be immune and you don’t have to vaccinate the adult population, unless there’s a change in the strain or something," he says.

"I think schools are going to start to feel normal come the fall," says Nachman. By that time, she believes everybody will be back to school in person. "I suspect that we won’t be having six feet distances between desks, perhaps three feet or maybe even less. But all of the staff will have been vaccinated and, therefore, we know that they're protected."

“Will I receive the COVID vaccine seasonally, like the flu vaccine?”

"The simple answer is that we just don’t know yet," says Syed. "We are following everything in real time; there’s really good evidence and reason to believe immunity from the vaccinations will be long-lasting, but we don’t know specifically for how long."

Syed estimates that it could be a minimum of a year.

"Does it hurt to receive the shot, and what are the possible side effects?" — Lucas Fazio, 13, Merrick

“How can a simple, cotton mask protect us from such a dangerous virus?”

She adds that the better-fitting your mask is, the better chance you have to contain those droplets.

"How safe is the vaccine, being that it was rolled out so quickly?" -Anthony Cermeli, 13, Elwood

"The thing that is really important to remember is that these vaccines have really been screened and vetted very thoroughly," says Syed. "They’ve gone to really significant safety and efficacy standards and protocols in these clinical trials."

"Those coronaviruses never went full-fledged to the scale that this COVID-19 pandemic did, but we had a lot of researchers spend lots of time and energy on those other viruses so we could have all this data ready to deploy."

“When can we play on the playground with other classes?”

Good news: Nachman believes this summer, camp will resume and kids will be "playing in schoolyards around the country." She adds, "Once we know that those are safe and the numbers in the community stay down, you will probably be able to play in the fall on the playground, as well."

"Will the vaccine for kids/teens have any effect on my future health?" — Alisia Soto, 17, Hampton Bays

“Will people need to get a booster vaccine for the different strains of the virus?”

Syed says there are five variants of concern that are being studied in the United States. She says Pfizer, Moderna and Johnson & Johnson are running tests to make sure their vaccines are effective against them. "If there ends up being a variant that we’re not aware of right now that ends up being dominant in the community that the vaccines are not effective for, then you might need a booster for that variant," she says.

"Does the vaccine protect others from me, or me from others?" -Hailey Schombs, 13, East Northport

According to Syed, it’s both: "On one hand they protect you from getting severe disease, hospitalization and death," she says. "Also, it has been shown that these are decreasing transmission, as well."

She adds that eventually if enough people are vaccinated, that double-sided protection will strengthen.

"The virus needs a host, so if you’re vaccinated and you have antibodies and the virus can’t run rampant in your body, you can’t give it to someone else and the virus has nowhere to go. So it’s a dead end."

“Why do you have to get vaccinated more than once?”

For the Pfizer and Moderna vaccines, which require two doses, "The first dose is basically the priming dose; it wakes up the immune system," says Sood. "The second dose reminds the immune system to make the protective cells for the long-term. Without that [second dose] the vaccine can’t complete its work."

"How long until scientists predict school will be back to normal?" — Lily Tannenbaum, 12, Merrick

Dr. Uzma Syed says it’s hard to pin down a specific date, since we’re learning more and more about the virus and its variants each day. A return to normalcy will be "in stages," and the key is to continue social distancing and mask-wearing. "What we can say is things are getting better as more and more people are getting vaccinated. This includes teachers as well, who are eligible in most states to get vaccinated," she says.

“Why should people still take the COVID vaccine even after contracting the virus?”

"Every virus infection is different," says Sood. "Some viruses, once you get it, you have almost permanent immunity, and examples would be measles, chickenpox or polio. But in this case it seems to be that the protection from natural infection might last a while, it might last months and years, but probably will not be permanent. So people who get the infection should still get the vaccine for long-term immunity because in this particular case, it seems like vaccine-induced immunity is superior to natural infection immunity, which is the opposite of some other viruses."

"Will the vaccine be available earlier to underage people who have connections to high-risk people?" — Nora Sweeney-Gladen, 15, Centerport

"Probably not," says Sood. "The priority is going to be to vaccinate the high-risk family members, and so I think it will be very complicated to have a vaccine program that tries to target children who have connections to high-risk people, because every child does."

“Is there a possibility that someone who was already vaccinated can still be a carrier of the virus and remain asymptomatic?”

"That is a possibility," says Sood. "But every week, there’s more and more data from studies to suggest that it’s very uncommon, and even if they’re asymptomatic and sharing the virus, they’re probably sharing such a small amount that it’s unlikely that they can give it to anybody. But until we have 100% confidence on that, people who are vaccinated around people who are not vaccinated need to continue to use precautions such as masks and distancing."

Sood says the short answer is no. "In the mRNA vaccine, the RNA doesn’t stay in the body after it delivers its message to the cell. As far as the viral vector vaccines, the two main ones are AstraZeneca and Johnson & Johnson, they use a common cold virus so that also is not going to affect children’s growth and development."

"After everyone gets the COVID vaccine, will everything go back to normal?" — Madison Sorok, 13, Elwood

The virus will stay with us, but "we could go back to 95% normal," says Sood. "That means we have to be very careful, which is not a bad thing considering all the other bad infectious diseases that kids are exposed to. This has started some good hygiene practices."

He predicts that once we’re told that we don’t have to wear masks routinely, we may still be asked to wear them for some periods.

CORRECTION: New York State law has not contained a religious exemption for certain mandated vaccines for children in school since 2019. An earlier version of this story quoted a misstatement about this fact.