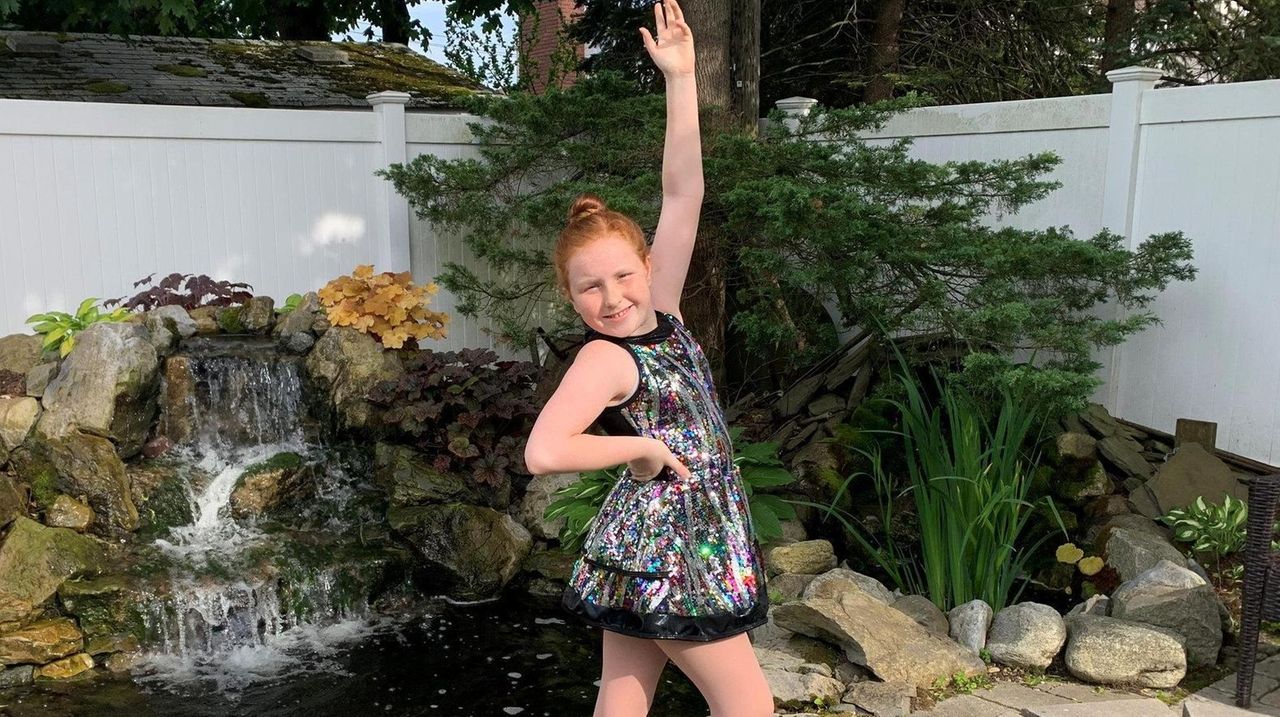 Zoe Schulken, 9, of West Islip,  would have been in five ballet and hip-hop acro numbers with Positions if they had their recital at the Staller Center in Stony Brook as initially planned. She shows Newsday some of her dance moves. Credit: Jen Schulken

Michele Rosner is used to choreographing moves as co-owner of Ella Marie School of Dance in Hicksville. But the fancy footwork she’s been doing lately has challenged even her skills.

Step one: The studio closed abruptly mid-March. Step two: They pirouetted to classes on Zoom. And now, step three: They realize they may not physically reopen until Long Island hits Phase 4.

That means the grand finale of the dance year, the pinnacle that students across Long Island have worked toward since September, that costume-laden, glitzy spectacle of dance talent — the recital — is a show that cannot go on in June as usual.

“Our recital was supposed to be June 6 and 7,” lamented Rosner. Typically, 350 students would be featured at three performances at Hofstra University in a theater that seats 1,000; the school hasn’t canceled a recital in its 56 years. But now, Rosner and other local dance studio owners must turn to other options such as online or outdoor recitals.

Kelly Komorowski, owner of Encore Dance Academy in Kings Park and Holbrook and an administrator of the Long Island Dance Studio Owners and Teachers Facebook Page, says she’s reserved the outdoor Patchogue Bandshell for the first two weekends in August, hoping to do a performance that features just one class at a time so that parents can rotate into seats as their children perform and avoid a crowd.

Rosner has entertained doing a series of smaller recitals in a hotel ballroom or in Eisenhower Park. She doesn’t want to postpone the recital until the fall because she’s afraid growing students won’t fit into their costumes by then. So now, she’s also thinking of recording students performing in small groups in costume in the studio when it reopens, and possibly showing them as a meshed together recital on-screen at a drive-in theater.

Positions Dance Studio in Babylon Village plans to have its students perform routines in costume during their last Zoom class the week of June 20 to 26, says owner Kelly Peckholdt. The studio is also offering an optional “red carpet experience,” in which students come with their families for individual performances and photographs in the studio.

Students are making the best of the situation.

“I feel sad because I don’t get to perform on stage where there’s lots of room. I also feel sad I don’t get to perform with my friends,” says Zoe Schulken, 9, of West Islip, who would have been in five ballet and hip-hop acro numbers with Positions if they had their recital at the Staller Center in Stony Brook as initially planned. Her favorite costume, she says, is a '70s-style dress with silver and rainbow sequins and black leather.

Kathleen Longobardo, 17, of East Islip, who has been dancing with Center Stage Dance & Creative Arts in West Babylon since she was 3, was set to perform a solo, a duet and other dances at the Bayway Arts Center in East Islip. “I’m upset … especially since it’s my senior year,” she says.

Fellow Center Stage student Jackson Greer, 10, of West Babylon, says he doesn't mind performing his tap dance solo and hip hop number on video instead of live. "It's a little bit different, but I'm OK with it."

In addition to being the culmination of the dance year, the recital provides revenue for studios to cover rent and other expenses through the summer, when children don’t typically take dance because they are in camp or vacationing with their families, owners say.

Dance Elektra Performing Arts Centre, with 300 students at locations in Center Moriches and Selden, charges $20 a ticket and usually draws 1,600 people to its two recitals at East Islip High School each May, says co-owner Theresa Schoemer. Then there’s the sale of the recital video, food, T-shirts and flowers at the event, and picture days for students in their costumes, owners say.

“The biggest thing for us was the risk of going into the next year and the loss that we took this year that would have to carry over into next year,” says Daniel Longo, who closed his East Coast Artists Dance Center in Smithtown on May 29 after five years in business.

“Where I would normally make money off of a recital, I will probably lose money off of this,” says Center Stage Dance & Creative Arts owner Janine Moretti, who had parents take photos of their children in their backyards or houses so she could post them on social media as a collage. She is hoping to pay a company to combine her students' virtual performances into a recital video.

“Everybody is very understanding that this is completely beyond our control,” Ella Marie School of Dance’s Rosner says of students and parents. “No matter what happens, we want to give them something that puts a period on the end of the sentence of this year.”

1:18
Where to see over-the-top Halloween decorations on Long Island
1:08
Lantern festival makes its debut on Long Island
0:50
Halloween House Long Island an immersive experience for all
2:05
DNA test reveals Massapequa woman has 5 siblings who live just blocks away
5:29
Meet Newsday's Teacher Makeover winner
Didn’t find what you were looking for?