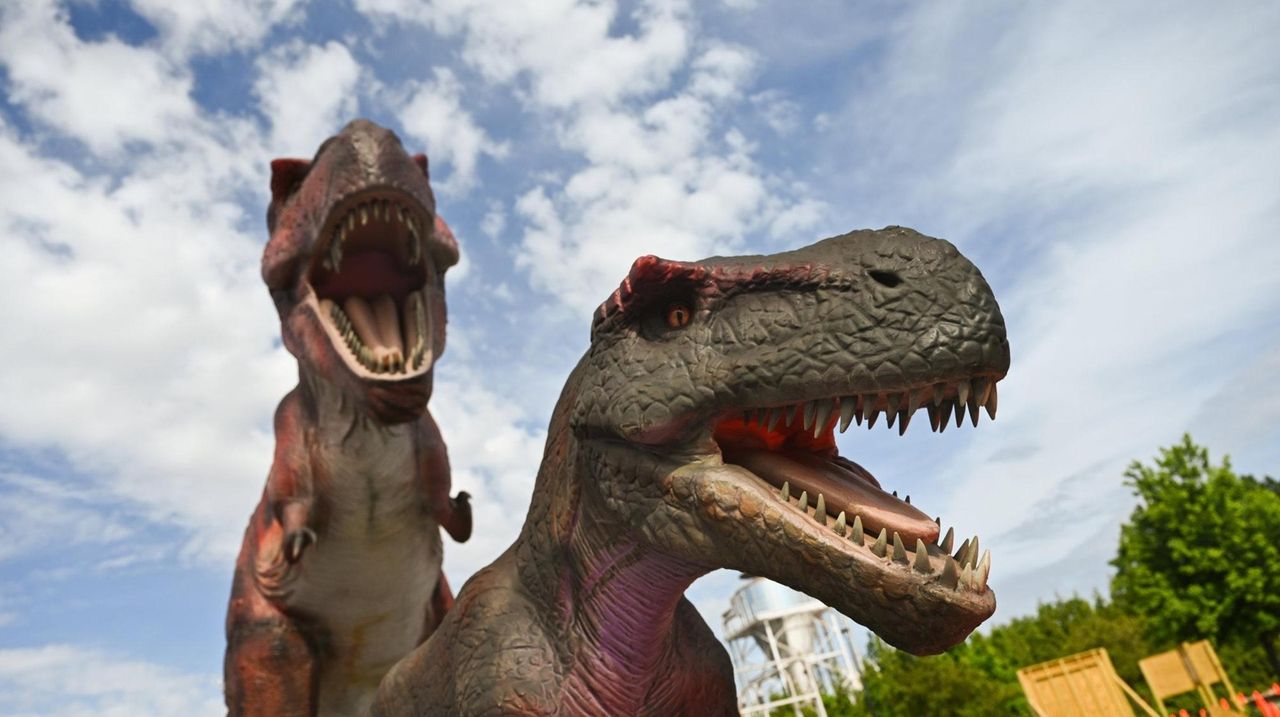 More than 40 animatronic dinosaurs stood at the Tanger Outlet in Deer Park, as part of the drive-thru Dino Safari, held until July 11.  Credit: Newsday / Steve Pfost

The professor welcomes carloads to Pangea National Park, where riders will visit Asia, Africa and North America and more, experience a prehistoric land-dividing earthquake and save a Tyrannosaurus-Rex dinosaur egg by delivering it safely back to its nest.

"It’s the kids’ mission to get mother T-Rex her egg before Pangea breaks apart," says exhibit designer Ana Valente. During the ride, an audio component in English or Spanish introduces creatures including a Velociraptor, a Spinosaurus, and, of course, that diva of dinos, the T-Rex.

"It is meant to transport you back in time for 30 or 40 minutes of your life," says Tom Zaller, the founder, president and chief executive of Imagine Exhibitions, the parent company of Dino Safari. The Atlanta-based company produces entertaining educational exhibits and has been responsible for nationwide exhibits featuring "Downton Abbey" and the Titanic. The dinosaur exhibition was moved outdoors last summer in Atlanta because of COVID and was so successful that it’s being continued this year, Zaller says. "You get to go on this journey in your vehicle," Zaller says.

Upon arrival, participants are given a Survival Pack, which includes a passport, a scavenger hunt to keep kids engaged in searching for items they see along the route, crayons and a baby dinosaur egg to protect (think plastic Easter egg because "if it was too nice, nobody would throw it back," Zaller says).

They then pass through each continent, learning about the different creatures who lived there, including Valente’s personal favorites, the Spinosaurus and the Therizinosaurus.

"The Spinosaurus has a crazy fin, a sign that he was dangerous and mighty. When the other dinosaurs saw the fin, they knew they had to turn around and run because he is a ferocious one," Valente says. It was the Spinosaurus that stole the fictional T-Rex egg that riders are trying to return, Valente says.

As for the Therizinosaurus, Valente likes its foot-long paws and long neck with black and white feathers.

While the exhibit dinosaurs are massive, they aren’t scary to most kids, Zaller says. "If you’re a 3-year-old and you’ve never seen a dinosaur and you get scared easily, you might have to tell them they’re not real dinosaurs. Your imagination at that age is powerful."

Tickets are for timed entry and the show goes on rain or shine, Zaller says. At the completion of the drive, riders are asked to toss their rescued T-Rex egg back into the nest. Then, there’s a drive-through merchandise store.

Riders can also have opted to purchase a Mystery Bag in advance, for either $20 or $40, which will have items such as a dinosaur toy, a logo bag or a dinosaur dig, Zaller says.

The journey ends with a Dino Safari song created just for the exhibit. "It’s a very catchy song," Valente says.

WHEN | WHERE 9 a.m. to 9 p.m. Wednesdays to Sundays through July 11 at Tanger Outlets Deer Park, 152 The Arches Circle, Deer Park.