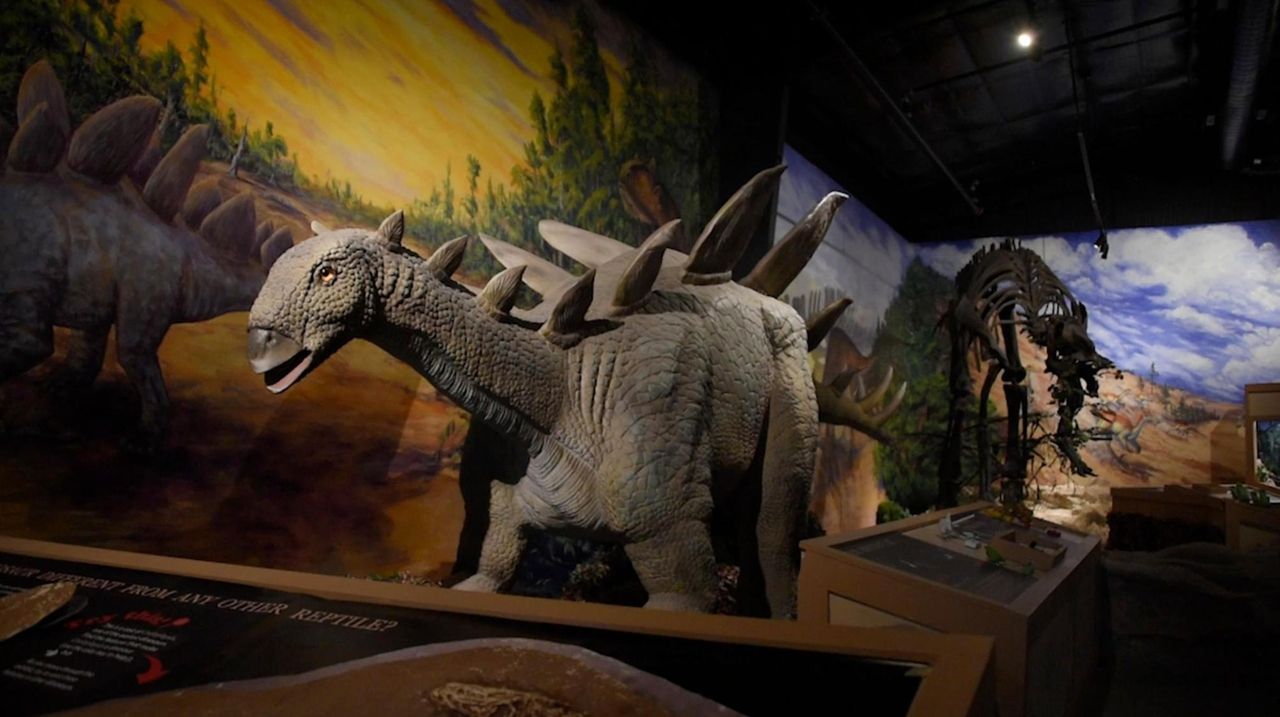 The "Dinosaurs!" exhibit at the Center for Science Teaching & Learning includes more than a dozen full dinosaurs,  two of which — a giant ankylosaur and an enormous Stegosaurus — cost more than $20,000 each and are animatronic creatures that roar, breathe, swing their imposing tails and bob their heads. Credit: Danielle Silverman

No need to travel to the American Museum of Natural History to see a life-size dinosaur skeleton — a 42-foot-long Camarasaurus is on display at the new "Dinosaurs!" exhibit at The Center for Science Teaching & Learning in Rockville Centre.

The exhibit, which opened July 15, includes more than a dozen full dinosaur models and another dozen models of dinosaur skulls and fossils. Two of the dinosaurs — a giant ankylosaur and an enormous Stegosaurus — cost more than $20,000 each and are animatronic creatures that roar, breathe, swing their imposing tails and bob their heads. “When you first walk into this new exhibit, you will see and hear dinosaurs moving,” says Ray Ann Havasy, center director.

“This is going to be an educational and tourist attraction expected to attract 150,000 people a year,” says Bill Corbett Jr., a center spokesman.

WHAT IT’S ALL ABOUT

Two enormous Tyrannosaurus rex — which the exhibit dubs “the greatest predator of all time” with teeth the size of bananas and jaws that could turn bones to dust — are perched outside the exhibit hall.

Entering the 3,500-square-foot hall brings visitors to the enormous Camarasaurus, a prehistoric plant eater that fills the room from front to back. Other dinosaurs include the Maiasaura, dubbed "the good mother dinosaur" because it cares for its young in a nest, and the Struthiomimus, which is covered with feathers and looks like an ostrich.

“Even though this exhibit shows you wonderful dinosaurs, it’s really an exhibit about adaptation,” Havasy points out. “It helps explain why a frog looks different from a turtle, why a T-Rex is different from a Camarasaurus. It’s just fascinating to see how they have adapted to survive.”

The displays urge visitors to “think like a paleontologist” and puzzle out why certain animals might run the fastest or what adaptations have allowed predators to capture their prey or outsmart their predators.

It explains how the ankylosaur’s hammer-like tail could swing and topple a T-Rex, for instance. It also makes its point with live animals behind glass. A stick insect, for instance, has a body that looks like a stick to blend into its environment and legs that can snap off and grow back if a predator takes hold. A green tree frog has eyes on the top of its head to see above water while swimming and a long, sticky tongue for nabbing insects out of the air.

Other live animals in the exhibit include a foot-and-a-half-long alligator and a ball python, which the display explains has no legs in part so it can slither into rodent burrows to capture its prey. “As a dad I can tell you, it really helps kids connect to what they’re studying in school,” Corbett says.

The experience is appropriate for all ages, with plenty of room for strollers, Havasy says. “The question has been asked about whether or not the exhibit is scary,” Havasy says. She defers to parents to decide. “We don’t know your children and what their tolerance is. The dinosaurs do roar, but it’s not really, really loud. The kids actually like that.”

WHEN|WHERE 10 a.m. to 4 p.m. daily at the WAC Lighting Hall of Science at the Center for Science Teaching & Learning, 1450 Tanglewood Rd., Rockville Centre

Where to eat near the exhibition

Burgerology (226 Merrick Rd., Rockville Centre), in addition to burgers, has become popular for the zany “monstrosity” shakes (their term), such as the “Campfire,” a graham-cracker-coated glass filled with vanilla ice cream, more crackers, chocolate syrup and roasted marshmallows. 516-600-9720, burgerologyrvc.com/rvc