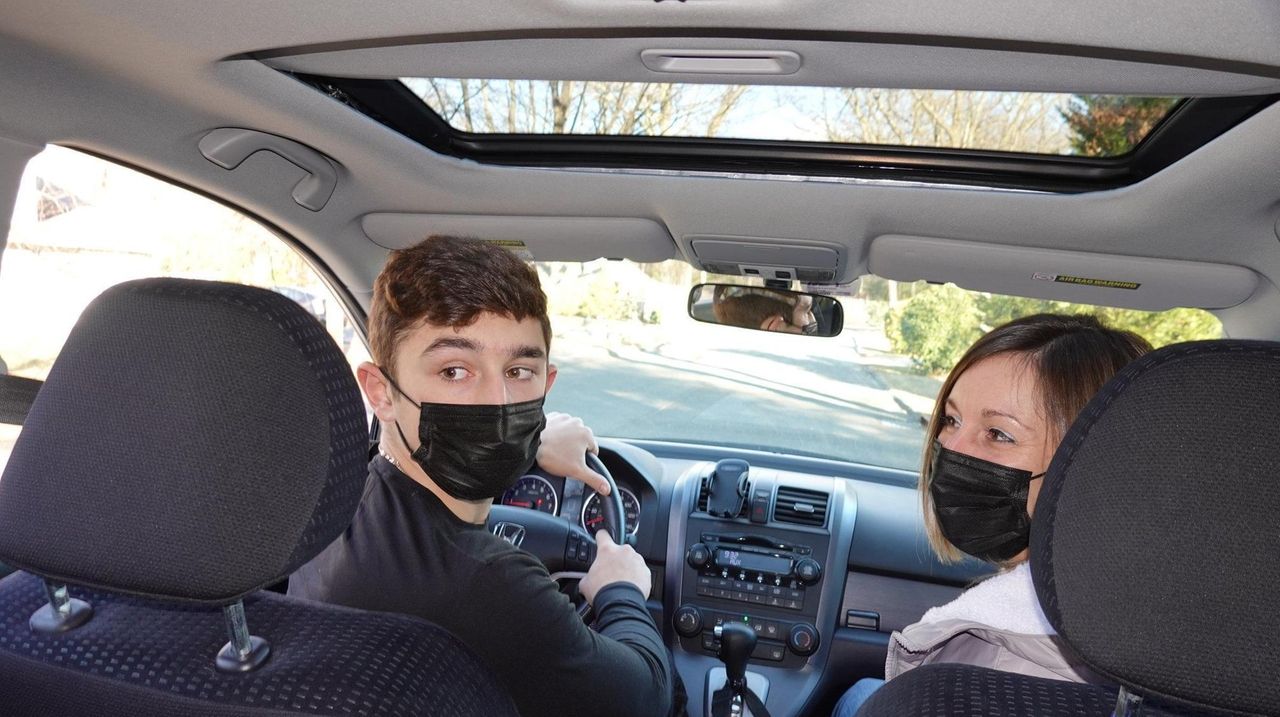 After the pandemic canceled her son Jacob Robinson's driving lessons, Megan Plapp of Melville decided to take him out for lessons herself as a way to keep them busy and gain some practice. Credit: Debbie Egan-Chin

When the pandemic hit, it brought a red light to the on-the-road driving lessons offered through driver’s education classes, where typically three or four teenage students in one car would take turns behind the wheel under the supervision of a professional instructor.

While the classroom portion of the training is still offered virtually, the practical applications — the K-turns, the parallel parking, the merging on to the highway — have to be taken over by a sometimes reluctant alternate: mom or dad.

“Parents are hating it. The parents’ fear is that they’re going to be arguing with their children. Sometimes they get a little offended by what you’re saying.”

Take this scenario at a stop sign described by Jennifer Dickson, 47, of Centerreach, an office manager who had to teach her son, Christopher, 17. "I asked him, ‘Did you look both ways?’ Of course he said he did." Mom’s response: "How did you look both ways if your head didn’t move?"

"It was a lot of fighting, lots of stress, me telling him to slow down sooner, or slow down around the curve," she says. Fortunately, all’s well that ends well, and Christopher got his license in the fall.

Perhaps surprisingly, some teens say they liked it better being taught by a parent. "We actually had a good time," says Jacob Robinson, 17, of Melville, of driving with his mother. "I felt more relaxed in the car because it wasn’t a complete stranger."

Plus, when Jacob was learning, the roads had less traffic because everyone was staying home, says mom Megan Plapp, 42, CFO of a financial group. "We took him on roads that normally would have been atrocious to learn on," she says, including the L.I.E. and the Northern State Parkway.

Many parents had already expected and planned to be the only driving teachers for their children. But others sign their children up for the optional Driver and Traffic Safety Education course offered through high schools and colleges because they want them to learn the rules and have their first instruction led by a professional.

Where LIers learned to drive

The fear of butting heads during lessons isn’t the only reason some parents say they are leery of taking over the training. "The bigger concern is teaching them correctly," Biondo says. "I’ve been driving for 43 years … I’m sure I’ve gotten into some maybe not well-practiced habits. You don’t want to transfer them to a young driver."

Typically, students sign up for a driver's ed program to become eligible for a full driver's license at age 17, says Lena Grasso, one of the administrators of the program offered through St. Joseph’s College in Patchogue. Without taking the course, they can receive a junior license at age 17 and have to wait until age 18 to receive a full license.

Driver’s ed has two parts. In the weekly classroom meetings, students learn rules such as what a solid white line means and what a dotted line means. In addition, the high school or college may contract with a private driving school to provide the on-the-road lessons in a car with an additional brake on the passenger side (so the instructor can overrule any errors by a student), Grasso says. Usually there are three or four students in the car at a time, and they take turns behind the wheel.

Now that parents are taking on the 24 hours of practical time required by the state to complete driver’s ed, they are given assignments such as taking the child on a major roadway or parallel parking. They must document the completion for their child to earn the coveted certificate to present when they take their road test at the DMV.

Would you pass the test?

"It’s nerve-wracking," says Vanessa Murphy of Selden, who works in supply chain for a vitamin company. "You don’t have that brake to push if they’re doing something wrong. We have people zip around us. In a car from a driving school, people know that there’s a student driving. When you’re in a regular car, they don’t see that."

Murphy has delegated most of the teaching to her husband, Neal. "My husband is a very poor passenger, so I can’t even imagine what it’s like. He clenches. I can see the expression on his face when I drive," Murphy says, expressing sympathy for her son, Adam, 16.

There are benefits to the temporary changes, however, some parents and administrators point out. Normally, some kids would have to show up at school 90 minutes early to do the behind-the-wheel portion of the course, says Dagoberto Artiles, assistant principal of Jericho High School, which offers driver’s ed. Instead, "They can say, ‘mom, let’s go to Starbucks, that will be my driving lesson’ on Saturday afternoon," Artiles says.

It also costs less without the in-the-car portion. For instance, St. Joseph’s has dropped its price from $515 to $300, Grasso says. Jericho High School is charging $385 for the course post-pandemic, $100 less than it charged when the in-the-car training was included, Artiles says.

Jericho High students Chloe Liu, 17, and Davesh Valagolam, 17, say they are planning to pay for one-on-one instruction by a driving school instructor anyway in addition to their parents practicing with them.

"Having it just one-on-one with the instructor, he can focus more of his time on me," Liu says. She also feels less responsibility for the safety of others while she’s learning. "I don’t have to worry about the other passengers sitting behind me," Liu says.

But the parent-led option may make for some comical memories formed between parent and child, Artiles says. "99% stress and 1% comical," he jokes.

Averie Sanchez, 16, of Westhampton Beach, currently taking driver’s ed at Suffolk Community College, says being taught by her parents felt more safe and beneficial because she was in a familiar car and because she trusts them. It was worth any drawbacks, she says. "They were a little more strict on certain things, like if you do a turn a little more narrow or sharp, they might freak out a little bit more than a driving instructor."

Heather Campbell, 42, of Islip Terrace, is not looking forward to beginning the training with her daughter, Naomi, who turns 16 on Feb. 1, but it’s not because of anything her daughter might do, she says. "We tried on our own with our son, and that wasn’t fun. It was horrible. I made him nervous, I made him worse. The poor kid is having to deal with me. I’m the issue."