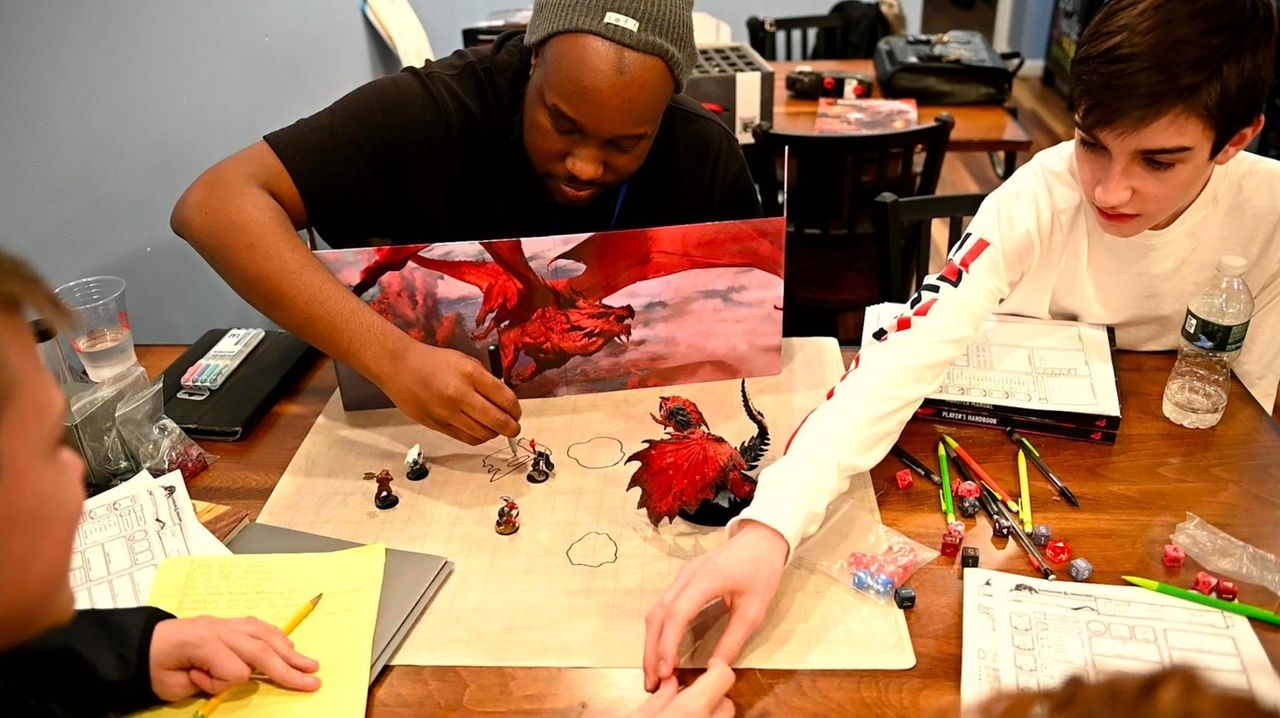 Dungeons & Dragons gamers at Main Street Board Game Cafe in Huntington, one of several places on Long Island where the role-playing game is becoming popular again. Credit: Newsday / Steve Pfost

Middle schoolers Felix Aldous, Jack Marr and Nathan Downey are on a quest to retrieve a magical sword that has the power to end a war. They have the blade, but they need the hilt, and they’ve just learned that it’s in the hands of a king--and the only way to get it is to make a dangerous journey to the castle.

“You’re all about to set foot into this underground maze, which happens to be lit, and you can hear the sound of gears turning inside,” Alan Cooley, 27, of Huntington Station, informs them. “All the monsters inside were cleared out long ago; the only thing you have to worry about is traps.”

Aldous, 13, of Dix Hills, Marr, 12, of South Huntington, and Downey, 13, of Centerport, may be gathered in the Main Street Board Game Café in Huntington, but in their minds, they are make-believe characters in a semi-Medieval fantasy world, caught up in the role-playing game Dungeons & Dragons. The game, which had a pop culture following in the 1980s, has enjoyed a resurgence, says café owner Neil Goldberg, who employs Cooley as “dungeon master” to lead the weekly game for tweens and teens. The dungeon master oversees the storyline inspired by a kit or the imagination, setting the scene, asking the players what they would like to do and pivoting the plot as the choices unfold. The players act as one team to achieve the goal of the game.

Here are seven reasons why D & D, as it’s known for short, has made comeback, according to players:

1. Pop culture references have made kids curious. “It’s experienced a renaissance since ‘Stranger Things,’” Goldberg says. The first episode of the 2016 season of the hit Netflix series features a group of kids playing D & D in a basement in Indiana in 1983, trying to defeat a D & D monster with two heads called the Demogorgon. “Like a lot of cultural touchstones, a hugely popular show like that, and the audience it has, can cause a massive wave of nostalgia. It exposes it to a new generation,” Goldberg says. The CBS series “The Big Bang Theory” also featured references to the game.

2. Social media and streaming websites have helped kids understand how to play. Sarah Finger, 13, of Levittown, who plays D & D with a group of kids at the Levittown Public Library, says kids can watch other people play on the streaming site Twitch, for instance, and that helps them understand the premise and rules. Joanie Sceppa, 17, of Long Beach, says she learned about D & D through a podcast she listened to as a sophomore in high school called “The Adventure Zone,” which is a recording of three brothers and their dad playing; she got her younger brother, Eddie, 12, into D & D and he started a club that plays every Thursday at Long Beach Middle School. When the creators of the Critical Role D & D podcast launched a Kickstarter campaign to turn their work into an animated special, more than 88,000 people pledged more than $11 million to the cause, making it one of the Top 10 Kickstarter campaigns ever. David DeRoia, 49, of Levittown, created the Long Island Dungeons & Dragons Facebook page to connect players; it has 236 followers.

3. It's like an in-real-life video game. “Dungeons and Dragons is an interactive … adventure that will ebb and flow based on the decisions, and sometimes a dice roll, of the participants,” Goldberg says. For instance, says James Connor, 16, of Northport, who plays with friends — a character might come to a tall tree they need to climb. If they roll a high number on the dice, they make it over the tree. If they roll too low a number, the dungeon master might inform them that they have fallen and broken a leg. Now their character will have to continue the game physically challenged. "Your decisions change the outcome of the story; there's also repercussions to your decisions that could change the story in a very good way or a very bad way," says Brian DeRoia, 16, of Levittown. Games can be played in one sitting or in a series of sessions called a campaign that can continue over weeks or even months.

4. Parents introduce their kids to the game. Finger’s father initially told her about D & D after she saw a jar in the garage filled with miniature figurines representing game characters; players use the figurines on vinyl gameboards that they draw on with erasable markers to represent what is going on in a campaign. Steven Finger had played in the '70s and '80s. “We had a small group that would play at lunch and at recess,” he says. Connor learned about the game after his mother, Amy, purchased a starter kit for the family as a Christmas present a few years ago.

5. Kids understand the concept of an avatar — and the D & D characters employ the same concept. Aldous plays a character he named Xilef (that’s Felix spelled backward), an elf wizard with the power to blow things up. Downey plays as a human whose voice cracked at 15 and never continued maturing, so he actually talks in character in a high-pitched voice during games. Some gamers even play in costume. “It gives me an opportunity to live through a person I’m not,” Sarah Finger says.

6. The game has become more inclusive. Early starter pack versions of the game featured primarily men, and the women characters were usually “running around in a bikini,” Steven Finger says. Now the female characters are just as powerful as the males and the artwork includes more characters of color, he says.

7. Being nerdy has become socially acceptable. When Finger played D & D in high school in the 1980s, “it was the geekiest of the geeky things you could do. Now it seems like everything nerdy is kind of cool.”

FOUR PLACES FOR KIDS TO PLAY

A Store of Fire and Dice