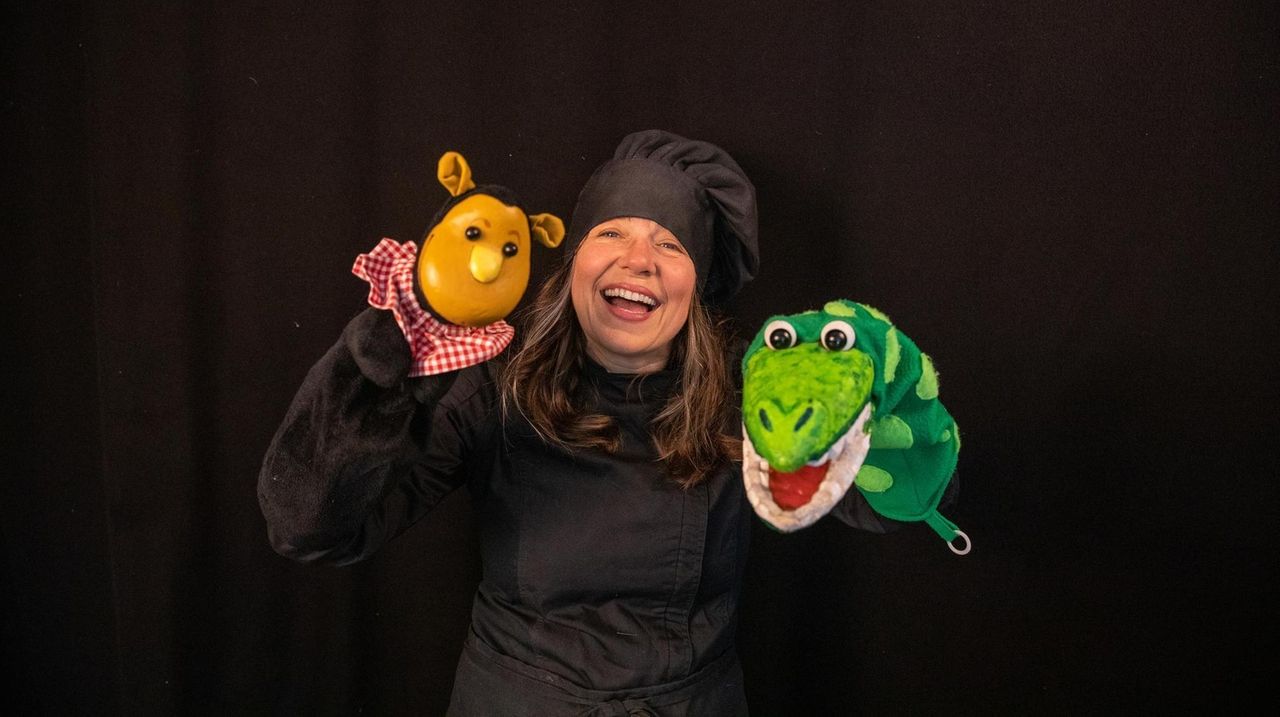 Liz Joyce, a Long Island puppeteer, explains where her love for the craft came from and how her everyday life inspires her shows. Credit: Morgan Campbell

Theater directors across Long Island see the reopening of shows for families as a celebration and rebirth of creativity. They’re beginning the season with some of their most dynamic productions.

Here’s what it takes behind the scenes to recreate the magic, and ways families can be part of the experience this summer.

During the pandemic, there were no travel restrictions at the bottom of the sea, so SpongeBob will return this summer to perform "SpongeBob SquarePants — A Broadway Musical for Everyone" at the Cultural Arts Playhouse in Syosset.

Show director Tony Frangipane says, "The show is the same as the Broadway production, but it’s performed with local, professional actors." Frangipane is excited about opening the season with this production. "After being closed for COVID-19, it’s a big celebration. Joyous," he says. "From the beginning of the show until the end, things will be happening around the audience."

Instead of behind the scenes, most of the theater magic will be created right before your eyes. The cast will interact with the audience. There will be puppets, tap dancing and costumes made of everything from pool noodles to balloons.

The set and props will be unusual too, "because everything on the stage could have fallen from the bottom of the sea," says Frangipane. "A percussion artist will sit on stage and create all the sounds in the show live as they happen, and I’ll be creating projection lighting. It’s a very silly, fun show to come back to the theater with."

Since mermaids are half human and half fish, chances are they weren’t required to quarantine. Fortunately, that means Ariel is back to perform in Disney’s "The Little Mermaid, Jr." Producing artistic director/co-owner Richard Dolce explains, "The music is a compilation of well-known songs from the Disney movie track, so the audience can sing along."

A lot goes on behind the scenes to bring this magical show back to life at the John W. Engeman Theater at Northport. Jennifer Collester, director of production, says, "There’s a moment where Ariel transforms from a mermaid into a person, and it happens on the stage. There are some tricks with lights, costumes and staging that happen right in front of the audience so they won’t notice Ariel’s tail turning into legs."

Quick costume changes backstage is another aspect of the production audience members can keep an eye out for. Collester explains, "Someone who’s playing Ariel’s sister in one scene might be a seagull two minutes later. So, we have to do a quick wig and costume change, and it’s an art in itself. It has to be done with an exact timing and rhythm."

"When it doesn’t work, the actors go back on stage however they are," Dolce added with a smile. "So, an actor might be missing a wig or part of the arm on a costume. But nine and a half times out of 10 they make it without a problem."

Want to come to the performance dressed as your favorite character? Collester gives a heads up. "Any young person who’d like to pay homage to Ariel the mermaid can put on a red wig. Personally, I always prefer Ursula the Sea Witch. If you’re coming to the show to honor her, wear purple and black and a shell necklace."

"The Adventures of Peter Rabbit"

Peter Rabbit and his friends are back to perform their story on stage at Theatre Three in Port Jefferson with a twist. Jeffrey Sanzel, the show's executive artistic director, says, "We decided to come back with 'The Adventures of Peter Rabbit' because it’s one of our most popular productions."

Though the show is based on the story of Peter Rabbit, Sanzel explains, the script is slightly altered from the original tale. "We always take a nonviolent approach and make sure there’s some kind of lesson children can take away from every story we present. The original Peter Rabbit tale is about stealing vegetables from Mr. MacGregor’s Garden, and that’s wrong. So, we changed the ending. Instead, they work together and share the harvest."

"The Wizard of Oz"

The Wicked Witch of the West, Dorothy, Toto and all others on the yellow brick road have returned for a family musical production of "The Wizard of Oz" at Gateway Playhouse. A simplified version of the story, using lines and songs from the original movie, has been adapted for the stage. Acting students from the Gateway School for the Performing Arts are the performers.

"All the characters, including the animals, are played by humans. But it wasn’t always that way," says Paul Allan, the show's executive artistic director. A few years ago, Toto was played by a stuffed animal. Another year, he was a professional dog that ran out of the theater.

GOAT ON A BOAT PUPPET THEATER

The past year must have been tough on puppets stuffed in a closet for a year. At long last, they can go back to performing. Longtime puppeteer Liz Joyce is presenting her original puppet show this summer, "The Marzipan Bunny." As Joyce describes it, "In this production, the puppeteers are bakers and also do puppet characters. Together, during the show, they make a bunny out of marzipan." Joyce’s shows often have an underlying theme. She explains, "The Marzipan Bunny is about unlikely partnerships and friends at odds. Becoming friends with others you wouldn’t necessarily be with."

The show can appeal to a diverse audience since it’s written with very few words. Joyce says, "It’s more of a pantomime."

So much goes on behind the scenes to create the magic in puppet theater. For example, Joyce dreams up her own scripts. "I get my inspiration from things in life that I love to do," she says. "While I’m doing what I love, I’m making up stories. I’m a gardener, so I have a lot of shows about life in a garden. I also love cooking and baking. I think I chose to do a baking show because it’s messy and funny, and it’s tasty." If you’d like to get a feel for what it takes to sculpt your own marzipan bunny before or after the show, try it at home with clay or Play-Doh.

INFO Peformances this summer at the Southampton Arts Center are on July 15 at 4 p.m. and Aug. 19 at 4 p.m. Admission is free; 631-725-4193; 25 Jobs Lane, Southampton. Email info@goatonaboat.org for more info. In August, Goat on a Boat is planning on launching a new puppet truck at Amber Waves Farm in Amagansett.

Everything from sponges to scarecrows to rabbits have been covered at this point, so why leave out pirates, jugglers and clowns? They’re back and will be performing in the Guild Hall outdoor garden theater this summer. The garden space just reopened to accommodate a large audience and new surround sound equipment has been installed. A family program known as "KidFEST" is offered before every family show. It’s the ultimate "behind the scenes" experience.

Guild Hall's Anthony Madonna describes it this way: "We believe in having families create together, and we like to do a preshow project that gets their minds, hands and bodies in context for the production they’re about to see. That way, they can relate to each show when it starts. So, for example, before the juggling Jester Jim show, families create bowling ball pins they can learn to juggle with." It also gives families a sense of what the performer will be going through on stage.