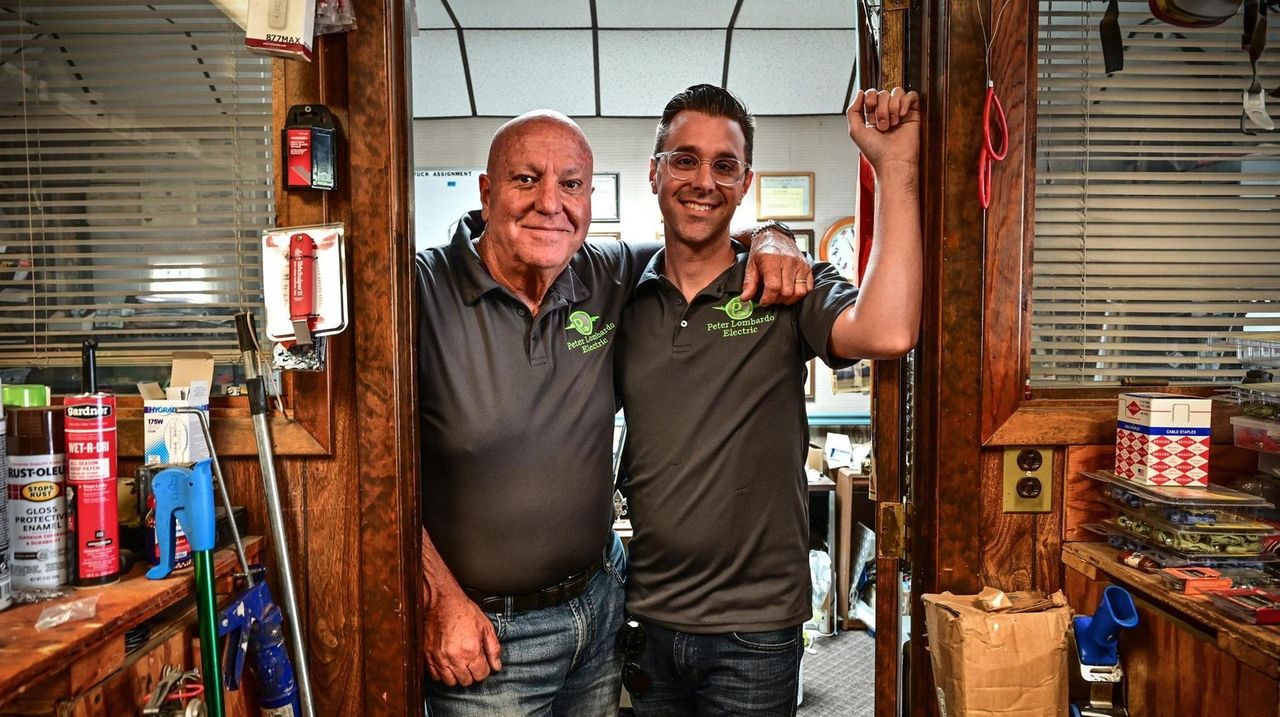 Rich Shlofmitz was the first in his family to become a doctor — and his son Evan is the second. At 6 a.m. on any given weekday, the duo will touch base at St. Francis Hospital in Roslyn before they start their day treating heart patients there.

"I came from the projects in East New York," says the senior Shlofmitz, 66, who is chairman of the cardiology department at St. Francis. "I knew I wanted to do something important with my life."

Rich's dedication to medicine made an impression on Evan, 38, when he was growing up in Manhasset. "It was an easy choice for me to follow in his footsteps," says Evan, also a cardiologist and director of intravascular imaging at St. Francis.

Here are the stories of seven Long Island sons who are in the same line of work as their fathers — and may even work side-by-side with them.

"Whenever I had off from school, I’d shadow my dad around the hospital and got to see the impact he made on patients," Evan says of his childhood. "He set the bar high with his innovation and work ethic and his unique way of practicing medicine." Now that Evan is a peer, he will bounce ideas and approaches off his father, he says.

On the flip side, the elder Shlofmitz says his son’s involvement with clinical research got him motivated to start doing research as well. "I owe a lot to my son," Rich says, including keeping him up on cutting-edge technology. "I’m so proud. The best part is watching his interaction with patients and staff. Everybody loves him."

And who knows? There may be a third generation of Shlofmitz cardiologists — Evan and his wife, Lisa, who live in Port Washington, are expecting a baby girl in August.

Peter Lombardo’s late wife was the catalyst for Mike Lombardo joining in his father’s electrical business. The elder Lombardo, 65, launched his eponymous electrician company in Deer Park in the 1980s; his wife was his business partner, handling payroll and accounts.

Their son, now 31 and living in Farmingville, initially wasn’t interested in becoming an electrician. But when his mother got cancer, she showed Mike the ropes so he could take over her position. She died in 2015.

If that event hadn’t transpired, Mike says he wouldn’t have earned his own electrician’s license. "Not a shot. That’s not to say I don’t like it, but there’s just no way. Nope. I would probably have done something in banking or finance."

The pandemic has been a boon to the company’s business. "Everybody was home, so they were doing home improvements," Peter says. Many people put in pools that needed wiring, he says.

At some point, Peter hopes Mike will take over the business completely. "I look forward to the day when he says, ‘Dad, I got this,’ and I’ll go on my merry way."

It was Luis Rosa’s wife who spurred her husband and son working together as well. When Amazon opened a facility in Shirley, she suggested that all three of them apply for jobs, and the trio was hired on the overnight shift Sundays through Wednesdays.

Sometimes they are unloading, other times they are scanning and stowing packages. They drive to work together, and they eat together on breaks.

"Working with my son has been one of the best things I’ve ever experienced. I’ve seen him grow up as a kid, and then to see him working with me, it’s such a great experience," says Luis, 42. William, 19, says he looks up to his dad: "I always see him working really hard, and I want to work just as hard as he does." 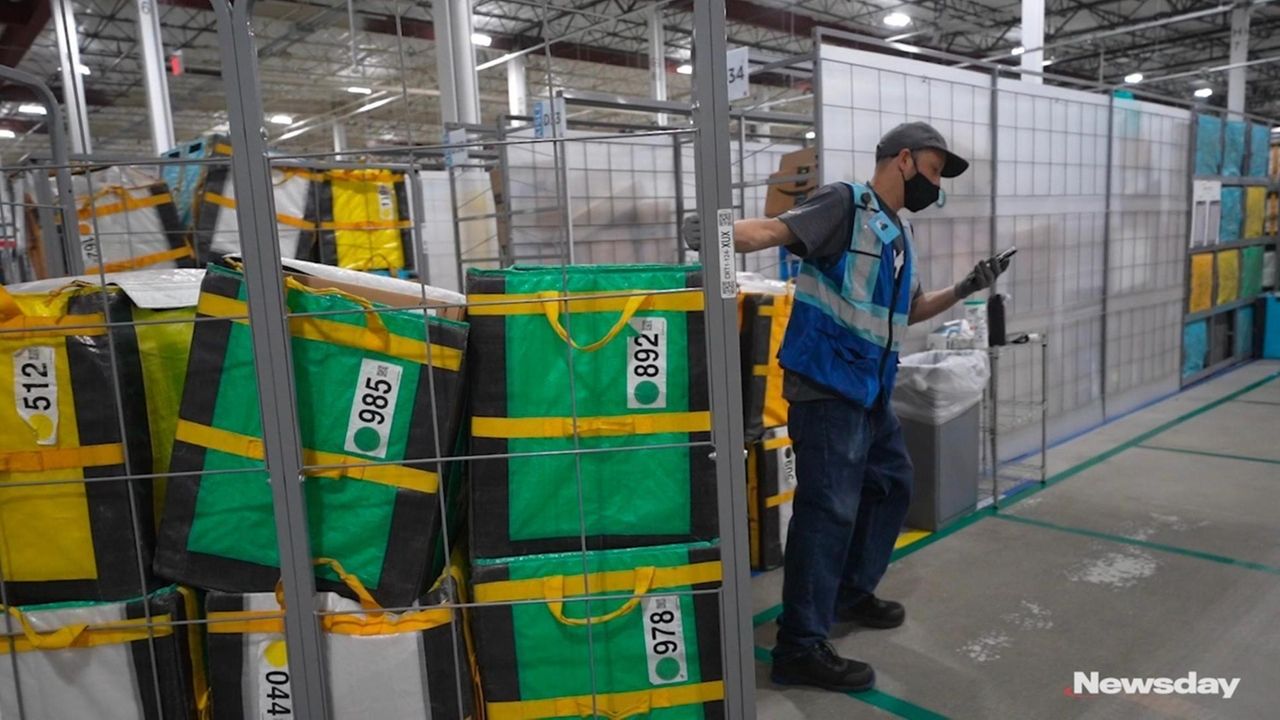 Father and son duo work at Amazon together Luis, 42, and William Rosa, 19, both work at the Amazon delivery station in Shirley and inspire each other to work harder. Credit: Randee Daddona

The toughest part for the duo was adjusting to the new work schedule. "My parents go to bed at 5 p.m.," says William, who on the other hand, likes to sleep as soon as he gets home from work. The family lives in Mastic Beach, along with William’s two siblings and his sister’s two children. "Sometimes they’re making noise in the house," he says.

At one point in the pandemic, the whole family had COVID-19. "I just can’t wait until all this is over," William says. "It’s been really hard on us. Luckily, we didn’t get it that bad."

For Father’s Day this year, the family plans to barbecue before Luis, William and Margarita, 40, head to the job.

Years ago, when Jonathan Cooper, 71, a social worker from West Hempstead, ran a support group for children with special needs at the North Shore Child & Family Guidance Center, he would bring several of his five kids to interact with the group socially. So, it was no surprise to him when three of his sons followed him into the counseling field.

Aaron Weintraub, 42, his son from his first marriage, works with social skills groups and at a summer camp for children on the autism spectrum in Connecticut. Jacob Cooper, 31, of Massapequa, is a clinical social worker in private practice, and Raphie Cooper, 26, lives at home and is in his second year of social work school.

"It was always about service," Jacob says. "That was really ingrained in us." Jacob says his father always encouraged them to value a population that other people might look away from or stigmatize.

Aaron's job is the closest match to his father’s. "As adults, I’ve had the chance to talk with him about how we both plan our curriculum and help each other with ideas and inspiration to try new things," Aaron says.

For Father’s Day, the elder Cooper plans to fly to Chicago, where he grew up, with Jacob to show his son the area. "I want him to see that. Those were formative years for me," Johnathan says.

When Lee Gaddy, now 64, of Wheatley Heights, joined the New York City Police Force in 1981 and was assigned as a housing officer, it was "the best thing that could have happened to me," he says. His son, Sean, 36, echoed his dad’s words when talking about his own experience as a Nassau County police officer, now assigned to the department’s Police Athletic League program working on community sports programs to engage kids.

"Growing up, obviously watching my dad go off to work, it was always interesting to hear his stories over the dinner table," Sean says. "My dad, he was big on telling me to take the Civil Service test. I thank him to this day. I never would have done it without him putting it in front of me. It’s the best thing I ever did."

This isn’t the first time the younger Gaddy has mirrored his father, says Lee, who retired after 22 years in law enforcement and now works for the Copiague School District as a security person. "Sean is well-liked, like me. He played high school sports, just like me. I’m happy because I think he has that type of attitude I had coming on: Do the right thing."

Sean recently had his first child, and he plans to spend his first Father’s Day in part by wearing matching shirts with his newborn during a breakfast visit to Lee’s home. He also hopes to follow in his father’s footsteps as a parent: "I hope to be what he is to me with my son," Sean says.

These 4 moms work with their daughters on the front lines"We got through it together," one daughter said of working with her mom. "She's really been my rock mentally. We were always really close, but this year brought us closer."