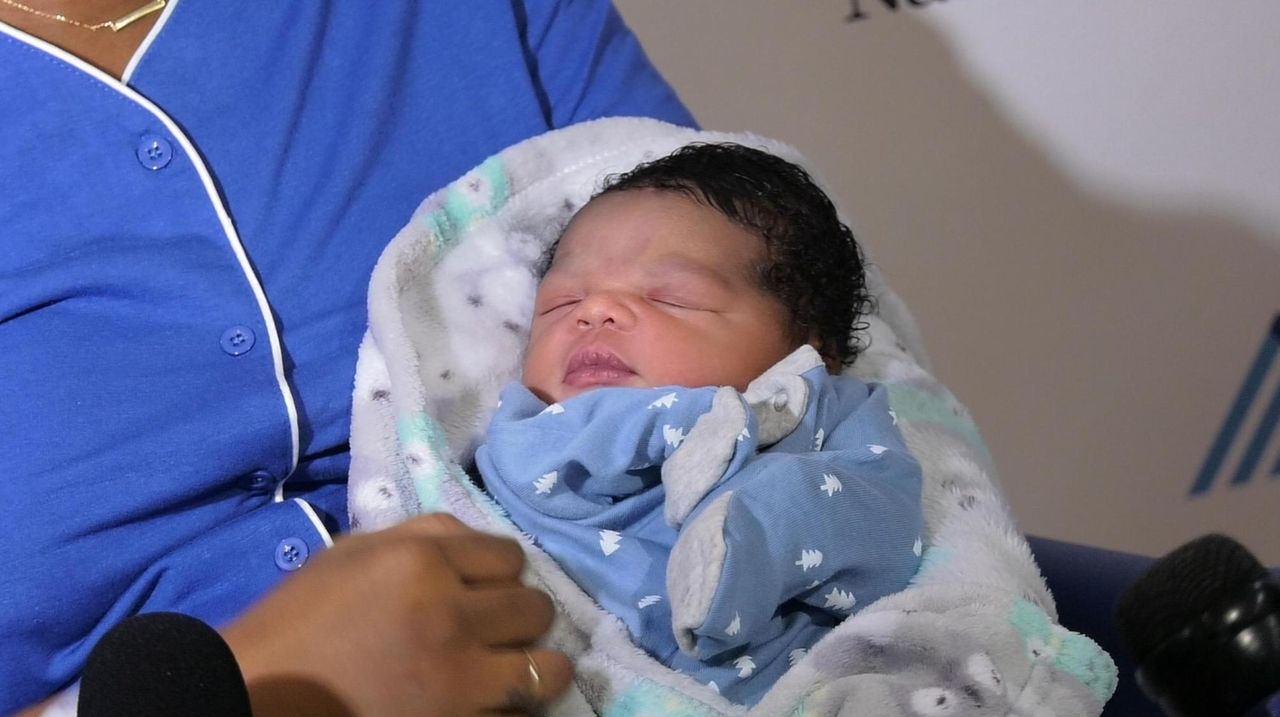 All the hope in the world — that the newborn children of 2020 should grow up safe and happy — could be seen Wednesday among Long Island's first parents of the new decade.

Inside Room 586 of Katz Women's Hospital at North Shore University in Manhasset, a tired Giselle Delahoz swaddled her baby girl in her arms. She and her husband talked about the world today and the world they hope she comes to know.

"What I want, above all, is safety for her," first-time dad Jose Adrian, 34, said in Spanish, which was translated by a friend. "We're living in a world that is constantly changing. But we must hope things get better in the future. That's why we must all contribute, because our children are going to live in the world we leave behind."

Tiny Natalia Sofia Adrian-Delahoz was born at 12:06 a.m., making her among the first new babies to arrive on Long Island with the new year. She weighed in at 6 pounds and 12 ounces and was 20.5 inches long.

Baby Bernard checked in at 7 pounds, 15 ounces and 20.5 inches long, and parents Bernard Nichols, 36, a machinist, and Tami Hall, a nurse practitioner, could take him home as early as Friday to Valley Stream. There, he'll join older brother Kaiden, 4.

So far Bernard has been “a perfect baby,” though he arrived slightly earlier than expected, Hall said. The couple thought they were headed to a New Year's party, but the ways of nature interrupted and they shifted course to the hospital.

"It’s the best New Years I’ve ever had,” Nichols said.

Hall said labor was “quick, painless and over,” and that the distinction of first baby of the year mattered little to her in the heat of the moment.

“I just wanted him out,” she said.

Parents and baby will leave the hospital with a gift basket of toys and diapers, a tradition on the maternity ward for the first of the roughly 2,000 babies delivered there each year.

When Natalia came into the world, doctors and nurses filled the labor room, celebrating the hospital's first birth of the year. They turned on the TV in the room so everyone could watch the big ball dropping.

"It looked like a soccer game — everyone was cheering," said her father.

Mom, it turns out, was much calmer than dad through the birth experience. When her water broke Tuesday afternoon, Delahoz was baking a traditional Venezuelan dish call ham bread. As her husband's adrenalin started spiking, she decided they'd wait another hour before heading to the hospital, until the dough rose.

In the car ride, she calmed him down. Then she fell asleep for the rest of the ride, the couple said.

Wednesday was a day of rest for all involved. Mom and baby slept in dribs and drabs, as family and friends stopped in to visit.

"I want the best for her, and we're going to work for that," Delahoz said.