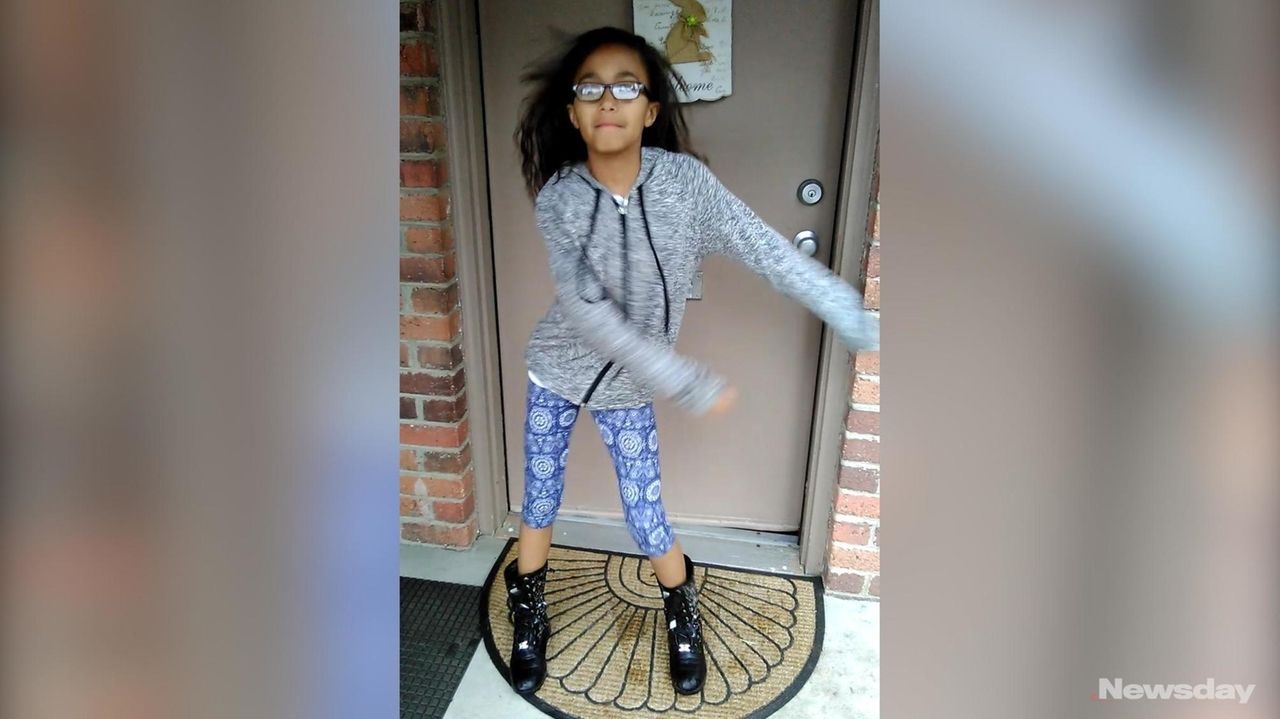 Kids are doing it in school, on the playground, even on the T-ball field. The dance involves swinging the arms back and forth rapidly like pendulums, with the hands primarily in fists. Alexandra Pender, 10, of Coram, demonstrates the Floss Dance. Credit: Joanne Pender

If you hear kids talking about flossing, chances are they don’t mean their teeth. A new craze called The Floss Dance has hit Long Island.

“I teach first grade in Baldwin. The kids, every day when they’re lining up for lunch, they’re flossing,” says Jenifer Levinson, who teaches at Meadow Elementary School. “The lunch monitors do it with them. They’re flossing in the schoolyard. Walking from their desk to the bathroom, they’re flossing.” Levinson says her 5-year-old son and his teammates do it when they’re out on the T-ball field. “It’s everywhere.”

It’s really more of a move than an entire dance, and it involves swinging the arms back and forth rapidly like pendulums, with the hands primarily in fists. It got major publicity when Katy Perry discovered a teenager dubbed “The Backpack Kid” from Georgia. He posted himself doing the dance while wearing a backpack on his Instagram account; she invited him to perform with her on "Saturday Night Live." It's also an "emote" dance move in the massively popular video game "Fortnite."

"That dance is insane," says Lori Herman of Lindenhurst, whose twin sons, Mark and Nicholas, 7-year-old second-graders, are devotees. Herman, who works as a receptionist for an oral surgeon, says she tells her boys, "If you flossed your teeth as much as you do that dance, we'd be set."

Herman says she's tried to do the Floss with her sons. "I've attempted," she says. "They've tried to show me. It has not always worked."

Nicholas says the dance is "mostly hard," because dancers have to coordinate both arms going simultaneously and rapidly in front and behind their bodies. What's the appeal? Says Mark: "A lot of people are doing it. I can't miss out on the fun."

It's not just younger kids who are flossing, says Alexandra Pender, 10, a fifth-grader from Coram. "All grades are doing it," she says. There's no specific song the dance is done with, and sometimes there's no need to even have music at all.

Alexandra's mom, Joanne, says her daughter competes in doing the Floss Dance with the neighborhood kids. “They challenge each other to see who can do it faster. I literally think one of them is going to throw a hip out.”

Floss Dance craze hits Long IslandKids are doing it in school, on the playground, even on the T-ball field. The ... 50 best places for families on LIFind out where LI parents love to take their kids. 16 birthday freebies for kids, adults on LIFrom burgers to balloons, birthday freebies are abound at many LI venues.