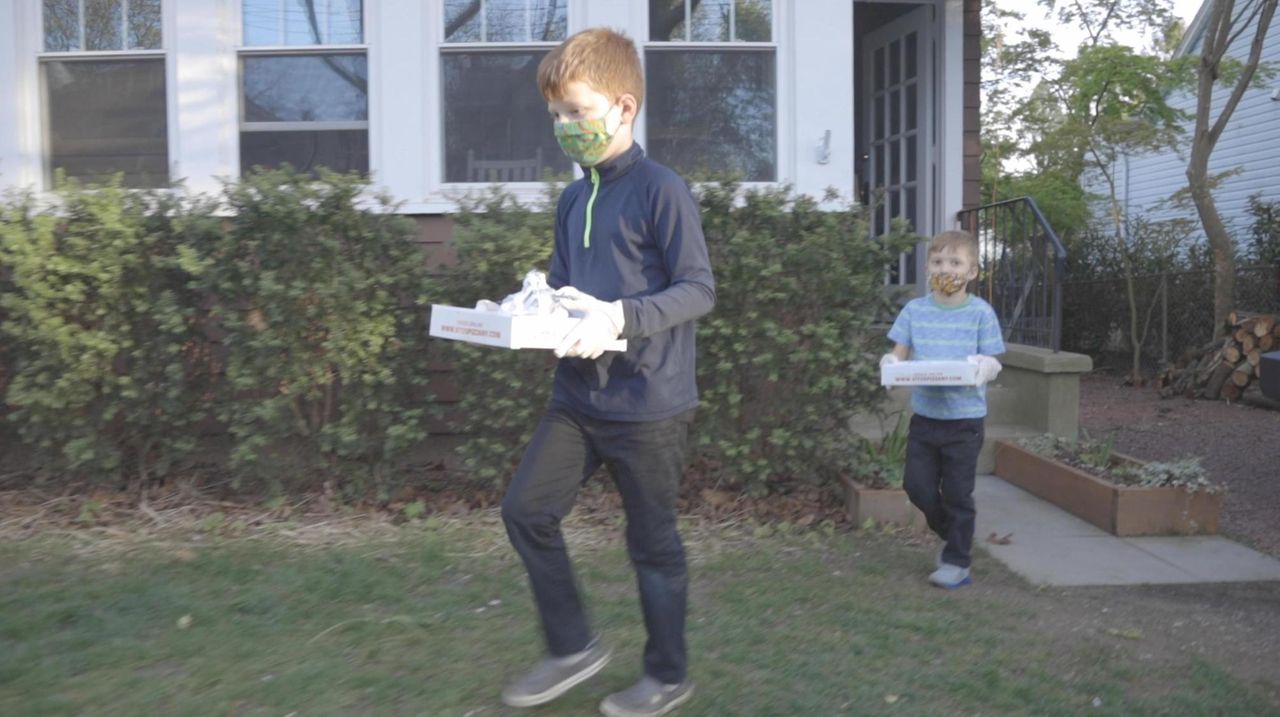 Sea Cliff chef Jason Potter and his sons have been making and delivering pizzas to their neighbors for the past six weeks. Potter says it's more than just food: It's bringing the community together. Credit: Kendall Rodriguez

Every Friday night since Long Island’s shutdown began, four sets of neighbors on Cromwell Place in Sea Cliff have emerged onto their porches for a social-distancing happy hour topped off by pizzas made by Jay Potter, a furloughed chef, and delivered by his two sons.

This was not the “old normal” on Cromwell Place.

The “new normal” has changed more than just these neighbors’ Friday night dinner menus. “This has definitely brought us a lot closer,” says Matt Barrett, a physical education teacher and one of the neighbors.

Across Long Island, a silver lining to the dark cloud of social distancing has been the ironic strengthening or renewal of bonds between neighbors, friends and even distant family members. “I find I’m more connected now than I was before the lockdown, because I was always working, and I was tired,” says Holly Silva of Copiague, who co-owns a cleaning business and says she has grown tighter with several friends playing video games on Switch and chatting while they play. “I found that I’m opening up more. We’re talking about things you wouldn’t normally talk about, like your fears.”

Social distance made them closer

By 6:15 on Fridays, the four neighboring families on Sea Cliff’s Cromwell Place can be found on their porches with their kids — the youngest being Jess and Matt Barrett’s 4-month-old son, Ben, and David and Lindsay Cheng’s 9-month-old daughter, Quinn. “They kind of hold up the babies and we ooh and ahh and ask what they’re up to. I’m dying to hold one,” says neighbor Shannon Meserve, 49, a circulation manager for a publishing company whose family includes husband Jeff Jackson, 48, an electrician, Lucy, 10 and Nolan, 18.

The new tradition began when chef Potter, 40, was furloughed on March 17, and he started to make pizza for everyone once a week. “For me to keep my skills up while also bringing joy to people, that’s kind of how it started,” he says. “Friday night has become a communal family meal from a distance.”

Potter may also drop off homemade English muffins, bagels and doughnuts, all for free. His pizzas are topped with homemade pepperoni, sweet Italian sausage, bell peppers, black olives, artichokes and more. Potter’s wife, Tanya, who works for a wine distributor, helps in the kitchen and their sons, Liam, 7, and Rowen, 5, deliver the pies to porches.

The neighbors now have a group text and help each other with shopping orders and more, Meserve says. “People are just checking in on each other,” she says. Adds Jess Barrett: “We were friendly before, but I feel like through this we’ve gotten much closer.”

When the isolation ends, Potter says he plans to build a pizza oven in his backyard with the help of the neighbors to keep the weekly tradition going.

Arthur Altarac, 68, of Merrick, decided that because his distant relatives were likely homebound like him, it might be a good time for a virtual family reunion. He’s now up to 31 relatives who have reunited several times on Zoom from the comfort of their homes in Florida, Massachusetts and the West Coast.

“I haven’t seen some of these people in 40 years,” Altarac says. Family members will say, “'You should see how big my grandson got,' and that grandson will stand in front of the camera.”

“I’ve been meeting all these interesting people,” says Lyn Dobrin, 77, a public relations consultant and a cousin of Arthur’s from Westbury. “Somehow I’m related to them." Dobrin had lost a recipe from her grandmother for Travados, a type of cookie, and one of the newfound relatives had a recipe and sent it to Dobrin.  "Things in my life that I’ve forgotten have been brought back into my memory," she says.

When the shutdown required Kelee Zaccardi, owner of Ash Hot Yoga in West Babylon, to close her studio, she immediately began offering online yoga classes and recruited Danielle Meill, 36, of Massapequa, to offer meditation as well through her platform. Meill had been a Bikram yoga student at the studio and Zaccardi had once done a meditation class at Meill's home.

Since then, Zaccardi and Meill have been in touch every day, leaning on each other, encouraging each other to stay positive. “She’s like my BFF. You would think with social distancing, it would create a separation of people,” Meill says. “This helped us form a deeper bond. In the studio, it’s a hustle and bustle of people coming in and leaving classes. I don’t think we would have gotten to know each other in that way if this whole thing didn’t occur. We’ve formed really like a sisterhood. We’ll definitely have this friendship through this and way beyond.”

When Alissa Sarsano, 28, a teacher from Copiague, realized that Holly Silva, 29, and Laura Natoli, 27, friends of Sarsano’s   since the days they all attended Copiague Middle School, were spending a lot of time together playing virtual games such as Clue, Uno and Monopoly on Nintendo Switch, she tried to buy the handheld device so she could join in. Because Switch is sold out everywhere, she had to scramble and purchase a used one from a friend’s sibling. “I got jealous. I had FOMO,” she says. Now she’s also playing with Silva and Natoli every day, chatting as they play.

"Even though it’s virtual, I’m still spending more time with my friends,” Silva says, and she finds that kind of connection to be one of the biggest comforts right now. “I hope that when things open up and we get busy again, I hope me and my friends will stay connected.”