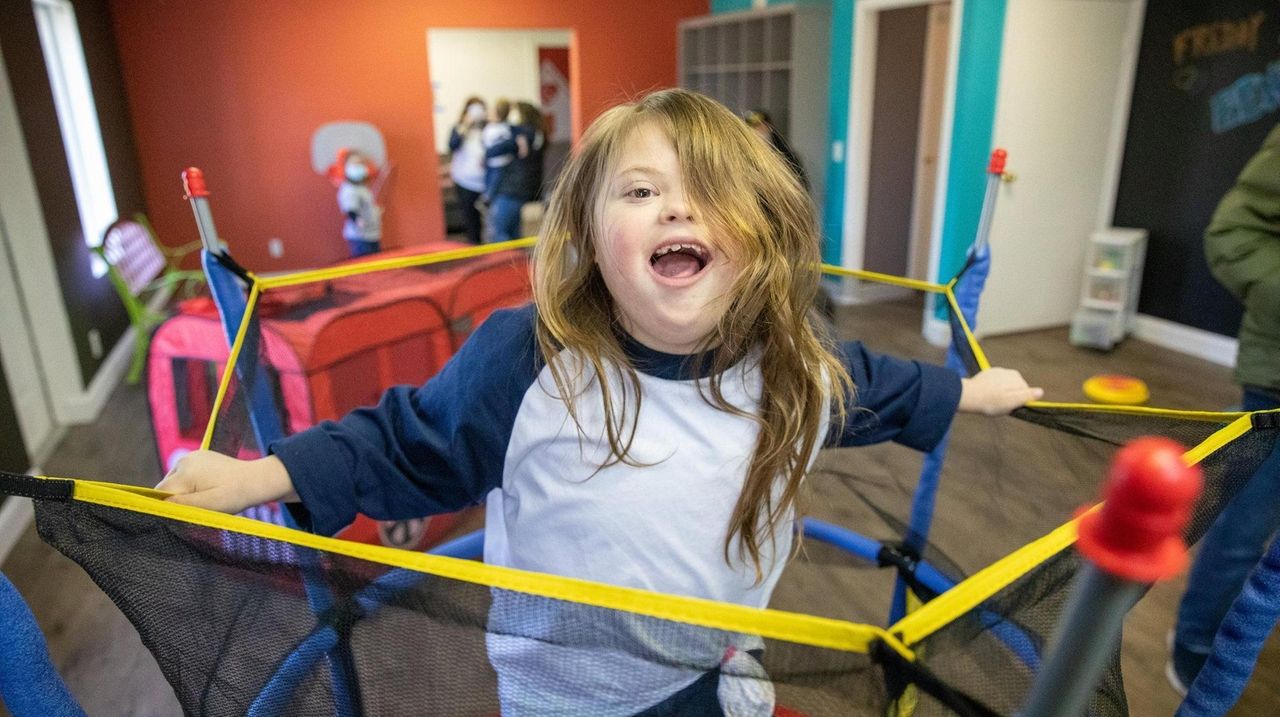 L, M, N, O and P are more than just letters of the alphabet to toddlers at the new GiGi’s Playhouse Down Syndrome Achievement Center in Patchogue — they stand for Language Music N Our Peeps, one of the community center’s programs for children through adults with Down syndrome.

The center opened on March 20, the day before World Down Syndrome Day. It is the first GiGi’s Playhouse on Long Island and the 52nd throughout the United States and Mexico. The center is modeled after the original GiGi’s Playhouse, established in 2003 in Chicago by Nancy Gianni, whose daughter, GiGi, now 18, has Down syndrome.

In addition to the LMNOP mommy-and-me style program, the center will offer Destination Discovery extracurricular sessions for school-age children featuring social skills learning, peer-to-peer interaction and one-to-one tutoring. It will offer fitness classes for teens and adults designed to help with physical issues such as balance and stamina. In the future, the center hopes to add cooking classes in its full kitchen, karaoke social nights and plays on its stage and a cafe where adults with Down syndrome can work. The programs are all free.

‘A PLACE TO PLAY’

Michele Krauss, 28, a customer service supervisor from Selden, says she is thrilled for her son, Derek, 8. "It will give him a place to be able to play with other children who are like him," Krauss says. And it will help parents who are expecting a baby with Down syndrome or parents whose child is newly diagnosed to get their bearings and support, she says. Krauss was 19 when she had Derek and was caught by surprise by his diagnosis, she says. "When I had my son there really wasn’t any help for me and I had to figure it out on my own."

Down syndrome is a condition in which a person has an extra chromosome. Typically, a baby is born with 46 chromosomes; babies with Down syndrome have an extra copy of chromosome 21. According to the Centers for Disease Control, the extra copy changes how the baby’s body and brain develop, which can cause lifelong mental and physical challenges.

Volunteers raised $200,000 to open the Long Island community center, and will continue to need fundraising to keep it going, says Michael Cirigliano, 38. Cirigliano works in insurance and financial services, is the president of Long Island’s GiGi’s Playhouse board and has niece with Down syndrome.

The center, at 100 Austin St., will launch programs virtually until the board can figure out how many people can safely gather in the 3,300-square foot building at one time during the pandemic; as soon as possible, it will begin indoor activities. Volunteers say they believe this is the only Down syndrome-specific community center on Long Island.

The center has 150 Long Island families on its email list, says Elizabeth Rahne of Selden, the center’s program coordinator. Rahne was a former special education teacher in the Brentwood school district for 33 years; she’s also Krauss’ mother and Derek’s grandmother. She says she’s looking forward to families seeing "all the things these children can achieve."

Gianni, who calls herself GiGi’s Playhouse’s Chief Belief Officer in addition to being the nonprofit’s founder, says she "prayed and dreamed" to see the kind of reach the playhouse now has; centers are set to open soon in Miami, Sacramento and Denver. Since the pandemic began, the organization has also launched GiGi’s at Home, bringing the programs online, Gianni says, which has enabled the group to reach people in dozens of countries. "We call it the COVID silver living," Gianni says.

Gianni praised the Long Island volunteers for getting the center going even during the challenges the volunteers faced during the pandemic. "It’s inside all of us to do great things," Gianni says. "It’s just a matter of giving them the right tools and guiding them in the right direction."

2:38
Adventureland opens its doors again after 18 months of being closed
1:14
Long Island family heads back out to celebrate birthday
2:09
Where to find nostalgic toys on Long Island
1:26
Father and son bond over vintage video games
0:18
Sitting in traffic
Snowmen across Long Island: Submit your photos
Didn’t find what you were looking for?