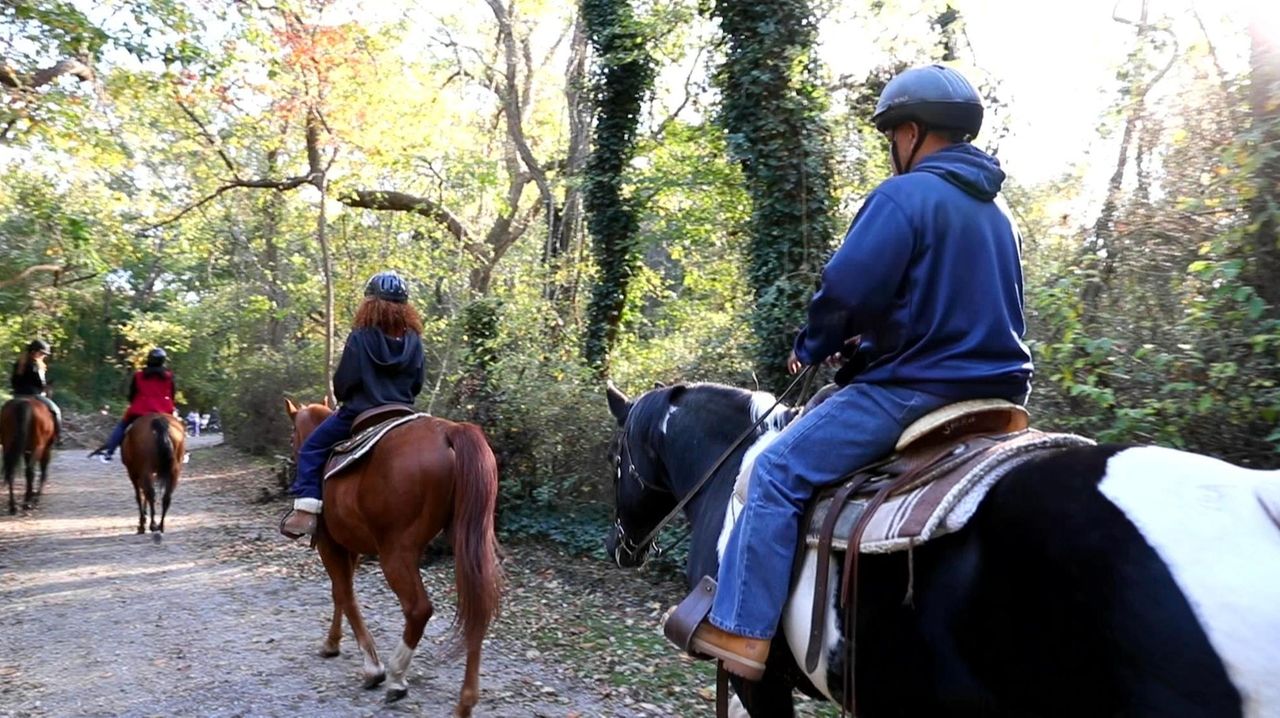 The Babylon Riding Center has a PATH-certified therapeutic trainer on site who will also provide the little ones with a lesson while their families are out riding. Credit: Michael Owens

In the autumn months, families flock to riding centers and horse farms from Bethpage all the way to Montauk. With the crunch of leaves underfoot and colorful foliage on the trees in sight, the horseback rides provide Long Islanders of all skill levels the opportunity to see nature, bond with animals and understand the history of the area.

Together time is at the center of the Bethpage Equestrian Center trail ride experience, says owner Kelly Montanye. The farm is home to Western broke quarter horses — horses known for their speed and agility over long distances. “More than anything else, the trail allows families to bond," she says, adding, "They not only bond with each other, but with the horses themselves."

The center’s one-hour rides run through Bethpage State Park. They offer group rides for those 8 years and older. The experience includes the center’s petting zoo as well.

Montanye says the farm has a deep community history: There are Long Islanders in their 70s who have come to the spot since they were young children.

“We all have become a sort of family,” she says.

The Babylon Riding Center was created to be inclusive of all abilities, says trainer and office manager Katie Nathan. For their hourlong trail rides, this means making riding accessible for everyone. The center has a therapeutic trainer on site who is trained and certified to aid people with disabilities to ride a horse.

The center, which has 45 horses and is about two acres, offers family trail rides for those 12 and up. If customers come with children younger than that, the center will provide a lesson while their family is out riding, Nathan says.

Their one-hour trail ride is along a track in Belmont State Park. They have quarter horses (stocky horses that move fast over short distances), rescued thoroughbred horses and some paint horses (which are a combination of stock horses and pinto horses -- which have patches of color on their coat -- often used in recreational horseriding, such as in competitions).

“The land is steeped in history,” she says. Riders trot in wooded areas and along the shore of the Block Island Sound. On the trail, they can see Camp Wyckoff, where President Theodore Roosevelt’s troops stayed after the Spanish-American War, as well as the third house ever built in Montauk (it went up in the 1700s). The ranch sits on thousands of acres of preserved land.

Those ages 8 years and up can take Deep Hollow’s 90-minute guided ride through state and county parkland. For families with those under 8, there is a shorter half-hour trail. The ranch is home to 52 horses, most of which are quarter horses.

“We have mothers who come in for a trail ride who, after an hour, end up smiling and happy. We have those who come back for lessons afterward. We make it fun and exciting,” she says. They ride in the Connequot River State Park Preserve along a trail with river views.

The trail is filled with wildlife such as foxes, Cordingly says. The center has 15 horses, but can accommodate large and small parties, including those with more than 15 people, she adds.

Families can take a ride on the trail with one of the academy’s seven horses, including quarter horses Revelation and Vincenzo, who Cash-Ferrara says are especially loved by the community. The academy also has several ponies. It is situated on a three-acre plot.

DDR Farm, a horse farm of about 12 acres, reopened this year after owners Diana and Dennis Russo began leasing the property from Suffolk County. The farm was previously called Sweet Hills. While the farm has a new name, generations have gone riding on the classic trails used today, says Diana Russo.

“Rides with Chuck on Sunday mornings are legendary," Diana says. "He has a really excellent knowledge of trails and the history."

The hourlong trail is situated in the 1,000-acre West Hills County Park in West Hills, a wooded area teeming with wildlife. The 20 quarter and draft horses (work horses that are bred to be able to pull heavy loads) used for riding are treated like members of the family, Russo says.

Riders must be at least 8 years old.

Cost: $50 a person for one-hour ride, with a 10% discount for parties of five or more; $20 for pony rides that include a grooming and safety lesson for children under 8

What to expect on the trail

Anyone with any experience level or in any kind of physical shape can ride on the trails at Bethpage Equestrian Center, except for those with back injuries, says owner Kelly Montanye. There may also be a weight limitation, says Katie Nathan of Babylon Riding Center. The horse is only supposed to hold one-third of its weight, so riders over 250 pounds may struggle to find a horse that can carry them, she says.

Like many other Long Island centers, riders don't need to bring any equipment, which is provided for rides, Montanye says. Trail riders should wear pants and closed toe shoes, preferably boots, Montanye says. Riders are not going to get unusually messy on the ride, but Montanye recommends riders don’t wear their "Sunday best," as they will be in the woods and around farm animals.

Allergies are typically not made worse by being on the horse, Montanye says. While people may have seasonal allergies from being outdoors, she says she has never seen anyone experience extreme allergies to horses.

For those afraid to ride, Montanye suggests that people come earlier than their scheduled time or the day before so the trainer can have the rider connect with the horse before they get on. In some cases, trainers may put those who are scared on smaller horses, she says. There is a benefit to lessons beforehand as well, Russo says.

The owners of most of the farms and centers interviewed for this story say that they primarily take smaller quarter horses on the trail rides. There will be at least one or two handlers on the trail with more added as the group gets larger, and it’s typically polite to tip them — $10 to $20 per person is the norm, the owners say.