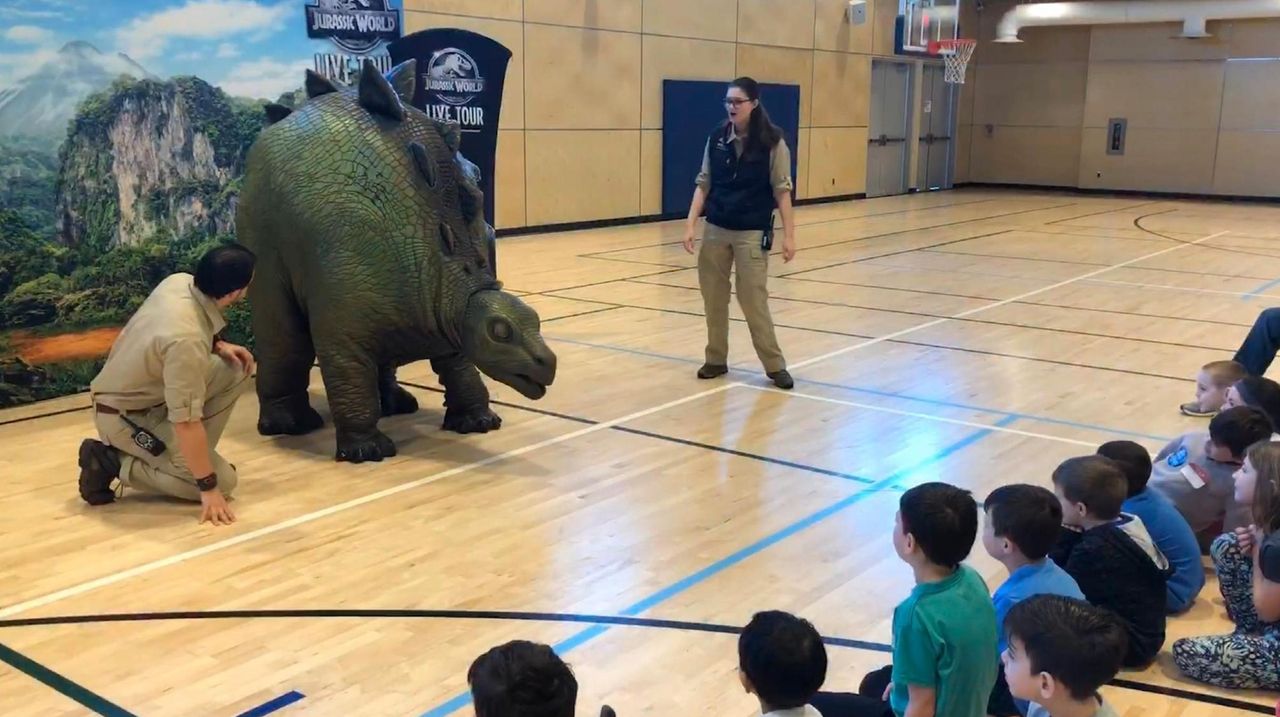 The "Jurassic World Live Tour" — which was set for a 17-show run at NYCB Live Nassau Veteran’s Memorial Coliseum in Uniondale — has been canceled amid coronavirus concerns, organizers said Thursday. Those with tickets to dates previously set for March 12 to 22 will automatically receive a refund if ordered through Ticketmaster, according to an emailed statement. Other tickets can be refunded at point-of-purchase.

It takes 28 trailers to bring more than 20 dinosaurs to Long Island for the "Jurassic World Live Tour" — including two to carry the enormous Tyrannosaurus Rex. The stage show was set to bring a new storyline to complement the eponymous franchise’s films, with animatronic, remote-controlled replicas from the movies and at least one newly introduced species.

A team of scientists led by Dr. Kate Walker battle bad guys who want to steal a device Dr. Kate created called the Dinosaur Decoder. The technology allows Walker to communicate with Jeanie the troodon — a highly intelligent species of dinosaur debuting in the Jurassic universe whose name is short for genius. But Kurt Reed wants to steal the decoder and use it to train velociraptors as military assets. During the show, he kidnaps Jeanie, and the scientists must rescue her.

A troodon is just one of the seven species of dinosaur audiences will see brought to life; there’s also at least one stegosaurus, velociraptor, triceratops, Indominus Rex, pteranodon and, of course, Tyrannosaurus Rex. “They are beautiful, intricate machines. They couldn’t be more realistic,” says Madison Embrey, who plays Walker.

Here are five edge-of-your-seat moments from the show, according to Embrey and Adrian Baez, tour coordinator.

• Dr. Kate is in her lab with colleague Dr. Martin Reilly on the fictional Central American island of Isla Nublar, where Jurassic World is located. Two interns have arrived for their first day on the remote island. “All of a sudden, Jeanie starts to get anxious and nervous,” Embrey says. A female Indominus Rex has escaped from its paddock and is on the loose. It breaks into the lab. “It’s a really jaw-dropping moment,” Baez says. “She’s really out there terrorizing the characters on the stage floor.”

• The Jurassic entertainment park creators had imagined a night parade at Jurassic World. “You get to see glowing dinosaurs in that scene,” Baez says. “The lighting and projection immerse you into the world.” It’s a “sweet moment” when the stegosaurus and baby stegosaurus enter, Embrey says. “When she makes her entrance onto the arena floor, the kids erupt. You hear them go crazy,” she says. “The iconic Jurassic Park score plays. That is one of the most heartwarming moments to me. I get goosebumps.”

• Dr. Kate realizes Jeanie has been kidnapped and is held at the facility where Reed keeps his velociraptors. The scientists sneak in to try to get to Jeanie, and Reed decides the only way to get rid of them is by setting the velociraptors loose. Who will prevail? “It’s very high suspense,” Embrey says.

• “Not only do we have dinosaurs, we also have athletic performers who do really cool stunts,” Baez says. At one point, Dr. Kate needs to be rescued from Reed atop an 18-foot cliff. “He literally kicks her off the edge of the cliff and she is hanging by a thread,” Baez says. “Martin comes in to save her. You’re on the edge of your seat wanting to know what’s going to happen.”

• And, of course, there’s the moment everyone’s been waiting for: the appearance of the Tyrannosaurus Rex. “The plot has been building the suspense of a T-Rex coming out the entire show,” Embrey says. Finally, the T-Rex enters, remote-controlled by three people who drive her, move her eyes right and left and more. “Think of the size of a yellow school bus. She’s literally the size of that,” Baez says. “She starts stomping around the floor. She gives her great, big roar. That’s a really, really cool moment.”