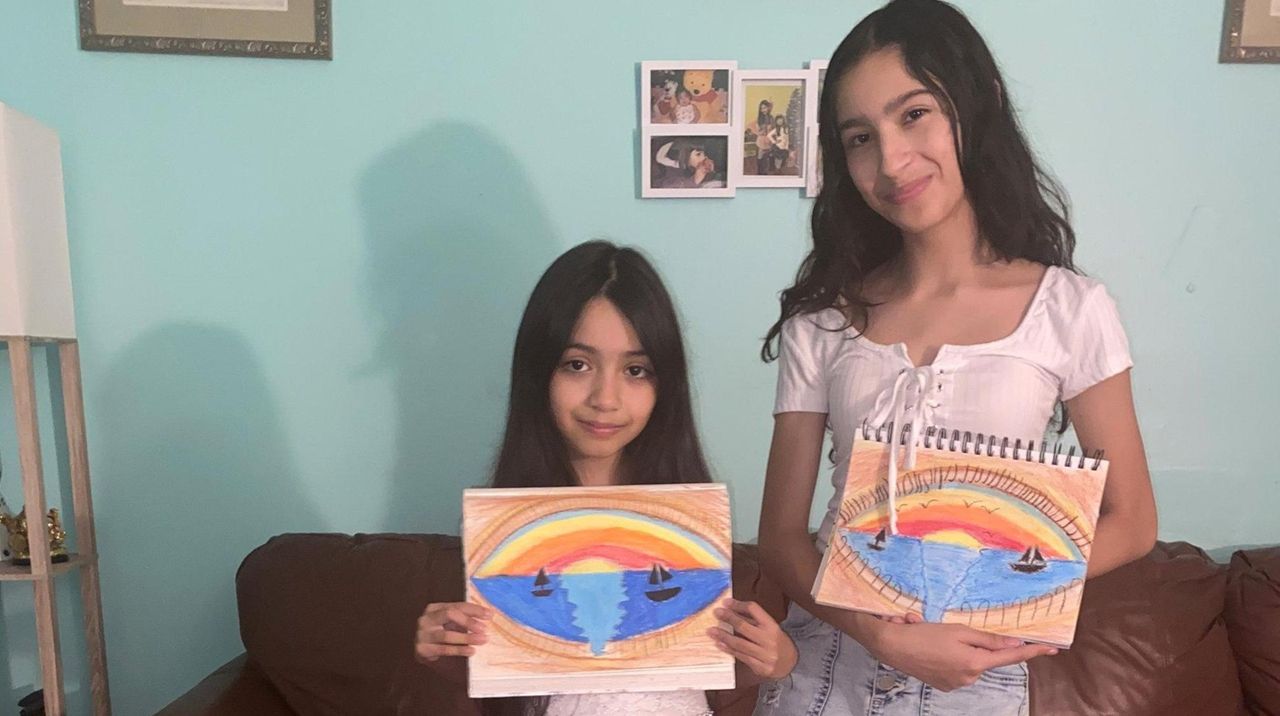 Allison Guallpa concentrates on following the video directions for an unusual portrait — the 13-year-old eighth-grader from Patchogue must draw a face using fruits or vegetables. She chooses a broccoli crown for the hair, peaches for rosy cheeks, a banana for the mouth.

That's just one project Guallpa and other children are tackling during a 10-week, free, virtual art education series led by Marie Saint-Cyr, owner of Saint-Cyr Art Studio of Wyandanch. Other challenges have included sketching a black-and-white still life of bottles, creating a watercolor landscape, learning shading and surrealism techniques, and imitating works of artists such as Van Gogh and Matisse.

"It’s so much fun, and she’s an excellent teacher," says participant Stephany Benitez, 9, a fourth-grader from Wyandanch. "She’s really nice, and she’s a really good artist."

Saint-Cyr began the program during the summer in part to give children an opportunity to express themselves and their feelings in a time of upheaval in their lives due to the pandemic. A new session began this fall as an after-school extracurricular activity, and the program will continue for the spring. Saint-Cyr, 25, a graduate of the Fashion Institute of Technology, emigrated from Haiti when she was 8 years old, and she says the programs she attended after her arrival were run by for free by nonprofits. "I know how impactful it was for me," she says. So, she wanted to create something for the next generation, she says.

Monique Kipp, 40, a stay-at-home mom from North Babylon with three children, Josiah, 11, Roman, 8 and Sarai, 6, in the program, especially notes a self-portrait assignment in which the children drew half of their own face and the other side of their face they filled with things that express who they are, such as sports, church or books.

The children get to make an see friends during the program's Zoom meetups, Kipp says. "It's an opportunity for so-called virtual fellowship," she says. At the conclusion of the series, Saint-Cyr displays students’ work in a "walk-through" virtual gallery online. "It looks like you are literally walking through a museum display with all the kids’ professional artwork hanging on the walls," Kipp says. "It was really cool."

Here’s how the program works: Parents contact Saint-Cyr through her website, Saintcyrartstudio.com. Saint-Cyr works with program funders who pay her and provide the supplies for the children, which parents can pick up or have delivered. Saint-Cyr then provides 30-minute videos through Google Classroom that walk students through creating their artwork projects. "They don’t have to do the project at a set time; they go at their own pace," Saint-Cyr says.

At 4 p.m. meetups Mondays through Thursdays, whoever can make it attends a Zoom session where they show off their works in progress, give each other feedback and ask questions. They also do five- to 10-minute exercises. "It might be ‘Find an object and draw it without lifting the pencil off the paper.’ Small exercises to improve their skills," Saint-Cyr says.

The majority of the students are from the Town of Babylon, which sponsored 50 kids this fall, says Claire Mc Keon, executive director of youth and disabled services. "This is one of the best things we’ve done so far," McKeon says of the program. "It was a tremendous success. We’ll continue the program, absolutely." Saint-Cyr has "a knack with the kids," McKeon says. Saint-Cyr is also working to bring the program to the Wyandanch School District as an optional after-school activity.

Guallpa says she signed up because of her love of art, and because wants to be an art teacher herself one day.

Stephany’s older sister, Xiomara, 13, took the series during the summer and is participating again this fall. "Instead of being bored, you’ve got something to do. You can create," she says. "During class when you do Zoom … you can see all the students’ work and get ideas."

Kipp says she jumped at the chance to sign her children up; she home-schools them, and she says the sessions fulfill their art requirements. "This was just right up our alley." All the supplies were included, such as paint, modeling clay, brushes, sketchbooks and more, she says.

"Her voice is so soothing," Kipp says. "When you listen to her videos, it makes you want to do it." Then she confesses: "I’ve done some of the projects along with the kids."