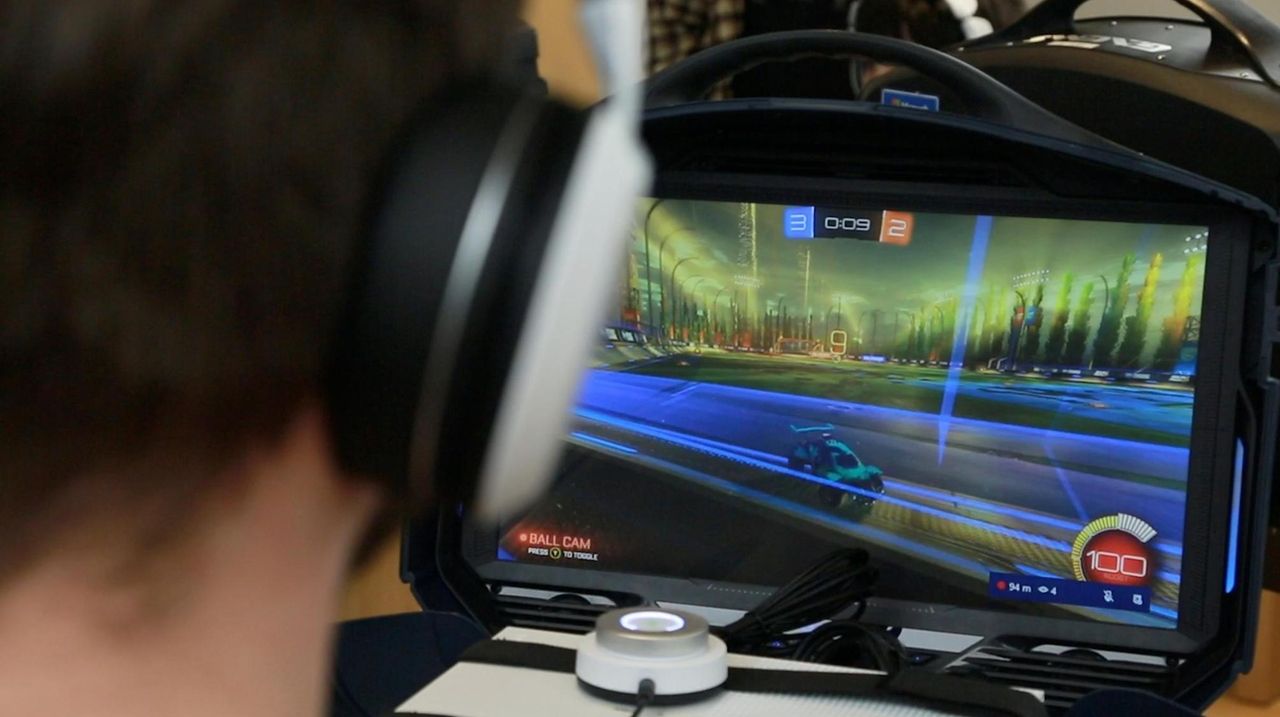 Gamers of all ages gathered to play in the Rocket League video game tournament on Sunday at the Microsoft Store at Walt Whitman Shops in Huntington Station. Credit: Newsday / Shelby Knowles

Griffin Spikoski is living the teenage dream. The 14-year-old high school freshman from Smithtown has earned about $200,000 playing Fortnite.

Griffin, who goes by the gaming moniker “Sceptic” and has a shock of blue hair, goes to school online in the mornings and spends afternoons livestreaming and narrating his video game play to his more than 280,000 followers on streaming platforms Twitch and Caffeine. In the evening, he puts together YouTube videos to broadcast to his more than 1 million YouTube subscribers. In October, Griffin traveled to California for TwitchCon, an annual convention devoted to the culture of video game streaming, where fans lined up for autographs and selfies with him. In April, he’s heading to Germany for the first TwitchCon Europe.

Griffin may be building his bank account and his gaming celebrity cred, but make no mistake, it’s a job. “If I was in real high school right now, it would be really hard,” Griffin says. “I would have no energy to stream, no energy to record videos. It would be a mess.”

Earning big money playing video games isn’t easy to do, agrees Alex Greenstein, 23, who went to Roslyn High School and was paid $500 a month as a professional player for a video game called Smite while earning a computer science degree at Stony Brook University. “There’s plenty of talent. You have to prove yourself through the sea of people.”

So how can teens make some money — even if it’s just pocket change — playing video games? Take a look at four ways to turn gaming to gold.

This is the easiest way to earn some cash. The barrier to entry is low — anyone with a computer can livestream. Two factors get kids noticed by others: They are really, really good at a particular game, or they are very entertaining narrators.

Streaming is how Griffin started, turning thousands of his followers into subscribers who pay $4.99 a month to get access to added perks on Twitch — Griffin gets half of that fee. “Don’t expect to get big right away,” Griffin says. He says he initially was thrilled and thought it was “crazy” to be able to make even $100 a month. Then he had a stroke of luck that he says made his career: He eliminated a professional Fortnite player called Tfue while streaming live. “I guess the stars aligned,” Griffin says. He clipped the move and posted on YouTube and it went viral at more than 1 million views. Those people started to follow his livestreaming and his YouTube channel.

Daniel Garcia, 14, a freshman at Bay Shore High School, says he is trying to become a streamer and a webcaster for esports events. He started streaming a variety of video games two months ago, has about 10 subscribers now on Twitch and says he has earned about $100. “If you don’t have engaging content and an engaged community, it can be difficult,” he agrees.

Anyone can also post YouTube videos, but to profit from it, you have to have enough followers for YouTube to monetize you and run ads on your channel. To get followers, videos need to be compelling, which takes some investment of capital. Griffin started asking his parents for a gaming computer, a monitor, capture cards and other high-tech equipment for Christmas and birthday presents. He has spent more than $15,000 on equipment. Griffin has hired someone online from Turkey to help him add special effects to his raw footage. He just got a plaque from YouTube congratulating him for hitting 1 million followers. Griffin averages $20,000 to $25,000 a month from his YouTube ad revenue, says his father, Chris, 41, who oversees four Suffolk County group homes for adults with autism.

Tournaments are another source of cash, whether through random online matches or live tournaments, amateur or professional. Greenstein framed the first $25 check he won for placing in an online tournament. Aurora Filan, 16, a senior at Bay Shore High School, says she has earned $500 from placing in three small Overwatch tournaments on Long Island.

Being signed as a professional player for a pro team is quite a long shot. “All these games, they have millions and millions of users. They all have the exact same goal in mind,” says Alex Zendejas, broadcast development manager for Misfits Gaming, which sponsors pro teams and has partnered with the Miami Heat basketball team.

But just like more physical pro sports, there is now big money in the pros. After Greenstein turned pro, he was flown to Atlanta by what was then Enemy E-Sports to compete against other Smite teams at Hi-Rez Studios; his pro team placed second in the 2016 Smite World Championship and the five teammates split the $230,000 prize. (Greenstein, who competed in Smite with the gaming name Khaos, has gone on to earn money from video games in another way — he now works full time in Alpharetta, Georgia, as a game play developer for Hi-Rez, the company that created Smite.)

Epic Games just announced a Fortnite World Cup competition for players 13 and older. The top 100 solo players and the top 50 duo teams from around the world will gather in New York City from July 26 to 28 and vie for a $30 million prize pool. 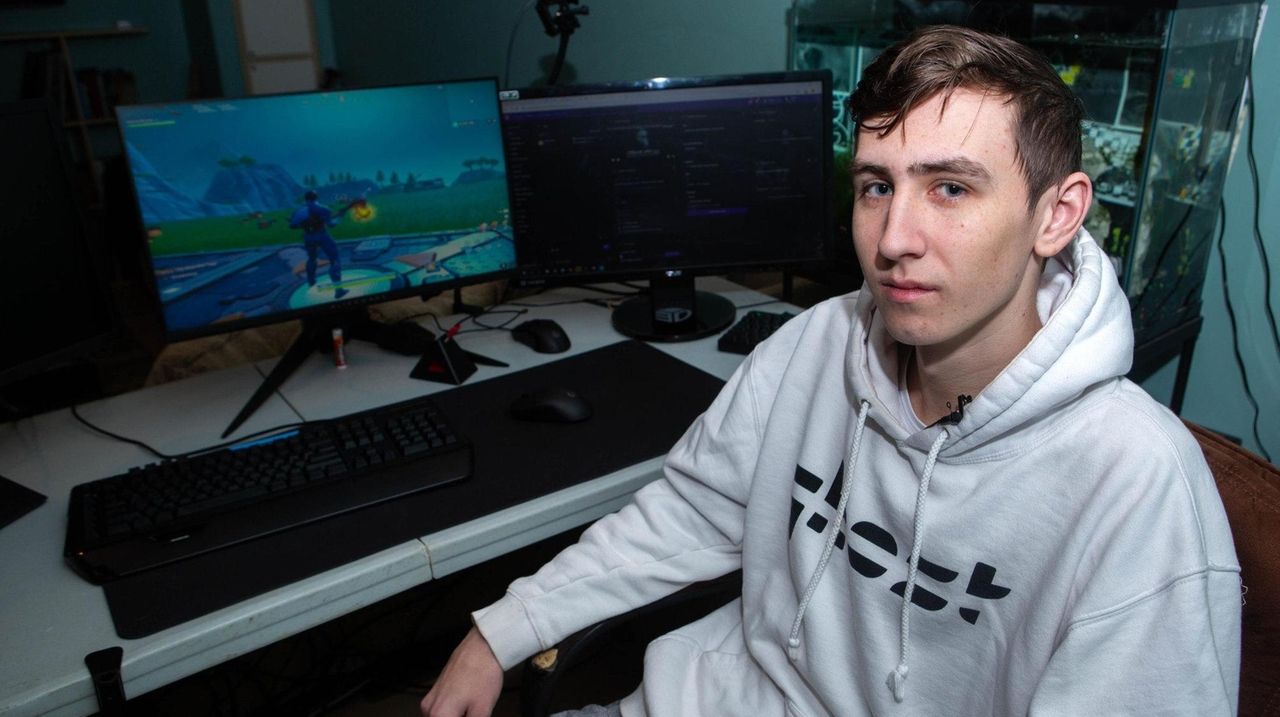 A number of Long Island high schools have started esports teams, which can help lead students to college scholarships.

Ryan says he was offered a full-tuition scholarship to Menlo College, a private school in Silicon Valley, California. Aurora Filan says she was offered up to $18,000 from three different schools — Molloy College in Rockville Centre, Menlo College and St. Thomas Aquinas College in Rockland County — to attend and play for their esports teams. “I didn’t think it could come from esports,” she says.

Dominick Bostick, 18, a Bay Shore senior, says he was offered $5,000 from St. Thomas Aquinas. Carrie Michaels, 17, of Lake Ronkonkoma, a senior at Sachem High School North, says she will be going to NYIT in the fall to play for its Overwatch esports team. She is waiting to find out how much her scholarship offer might be, she says.

Molloy College just got approved for scholarship money this academic year, says Kerry Bourgoine, the school’s esports consultant. This is the first school year the college has had official esports teams competing in Overwatch, League of Legends, Fortnite and Madden.

“Esports is like the Wild West right now,” Bourgoine says. “Not everybody realizes yet that colleges are offering esports scholarships.”

50 best places for families on LIFind out where LI parents love to take their kids. 24 new places for kids, parents on LISome of the most recent, family-friendly spots that opened on LI. LI restaurants offering fun experiences for kidsGo to the carnival, climb aboard a bus or pet a kitty -- all while you eat.