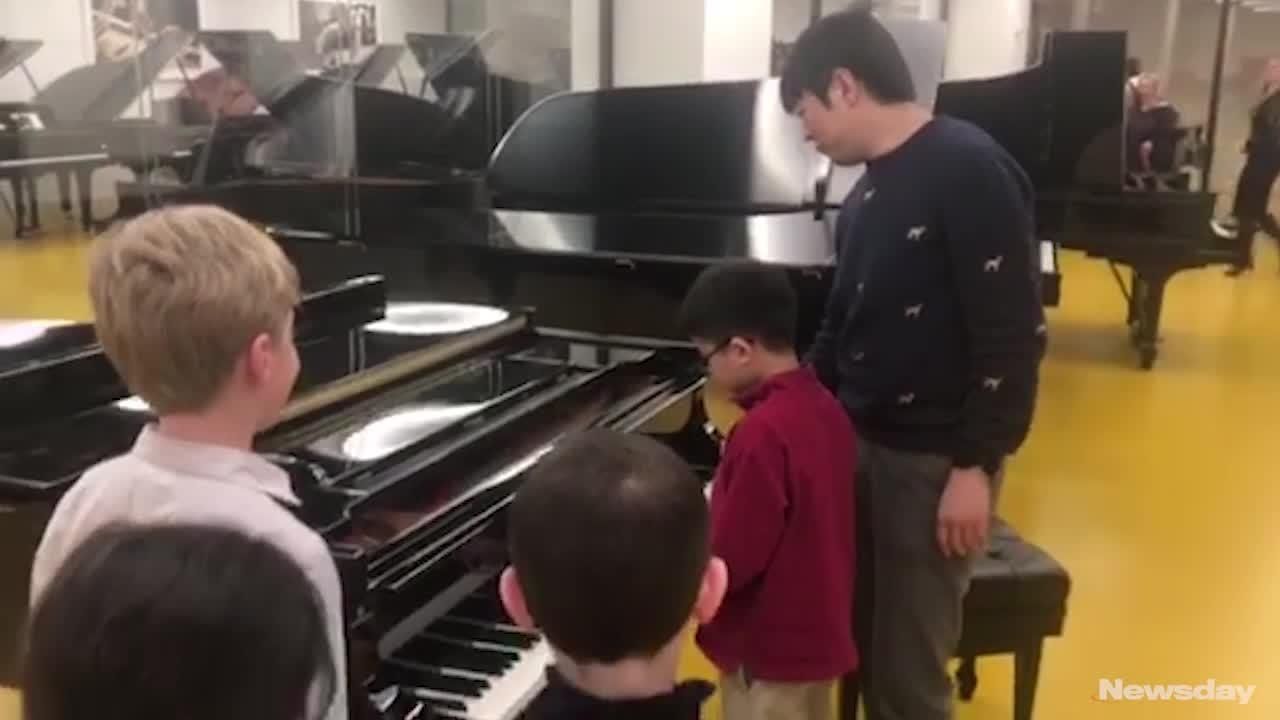 Our Kidsday reporters from Great Neck had the opportunity to interview and then play piano with Classical Pianist Lang Lang at Steinway Hall before his Carnegie Hall event this past Friday. Credit: Newsday/Patrick Mullooly

Have you ever been around true greatness? We have! We met Lang Lang, one of the greatest musicians of all time. Brendan even got to play piano with him. We will remember this day forever.

Lang Lang was born in Shenyang, Liaoning, China. He started playing piano at age 3, and two years later, he won first place at the Shenyang Piano Competition and performed his first public recital. Lang Lang is a leader in bringing music education into the 21st century. The Lang Lang International Music Foundation strives to “educate, inspire and motivate the next generation of music lovers and performers.” He has definitely inspired us to keep working hard.

Lang Lang is in New York to host the Grammy Salute to Classical Music. This is one of more than 2,000 global events celebrating the life of Leonard Bernstein, 16-time Grammy winner, who was a composer, conductor, pianist, author and lecturer. The event is Friday at Carnegie Hall’s Stern Auditorium. The Lang Lang International Music Foundation supported the event by bringing more than 1,000 students.

Before the event, he sat with us and told us about himself. We asked him if he teaches others to play piano. He said he does. He teaches master classes on Facebook that reach many people.

The Lang Lang Foundation is in its 10th year, and he told us he is so proud of all the people he has reached. We wanted to know how Leonard Bernstein’s music influenced him. He said he thought Bernstein was the most inspirational musician and he was the best conductor. We also wanted to know how he felt having to host the event. He told us he was not used to having to speak that much because he is usually behind the piano.

Even though he is most famous for playing classical music, Lang Lang told us he likes jazz a lot, too.

Spencer wanted to know if anyone ever expressed how his music has inspired them. Lang Lang told us he gets some nice letters from public schools in New York. There are a lot of kids who never listen to classical music because they think it may be a bit boring, he said. “The letters really encourage me,” he said, “because they feel like it is a new experience, and they really enjoy playing and listening, and that’s kind of the best moment.”

Two of us play piano, and we asked him if he had any advice for beginners. Lang Lang said, “Enjoy playing, because sometimes the beginners get bored really fast. You need to have a little time to learn before you enjoy.”

We asked him, when he listens to a young person play the piano, how does he know if they have the talent to be a successful pianist? Lang Lang said, “You hear their performances and you kind of know from their playing what level they are at. Sometimes the level may not be there yet, but you can hear their soul and their technique. Then I try to figure out how to bring out some of their talents . . . and try to inspire them and develop the meaning behind the notes, and bring out their character.”

14 trends every LI parent needs to know in 2018Take a look at the potential parenting trend forecast that may capture your attention in 2018. 16 birthday freebies for kids, adults on LIFrom burgers to balloons, birthday freebies are abound at many LI venues. Places where you can pay one price, play all day on LIThese places are bound to please active kids and ensure a good night's sleep.

0:36
Matching pajamas for the holidays becomes a tradition
The elves are back! Creative Elf on the Shelf returns
The hottest toys of the 2021 holiday season
1:47
Port Jefferson Village kicks off annual Dickens Festival
1:43
Painting class where you can eat your chocolate creations
1:26
Two LI women among the first legal gestational surrogates in New York
Didn’t find what you were looking for?