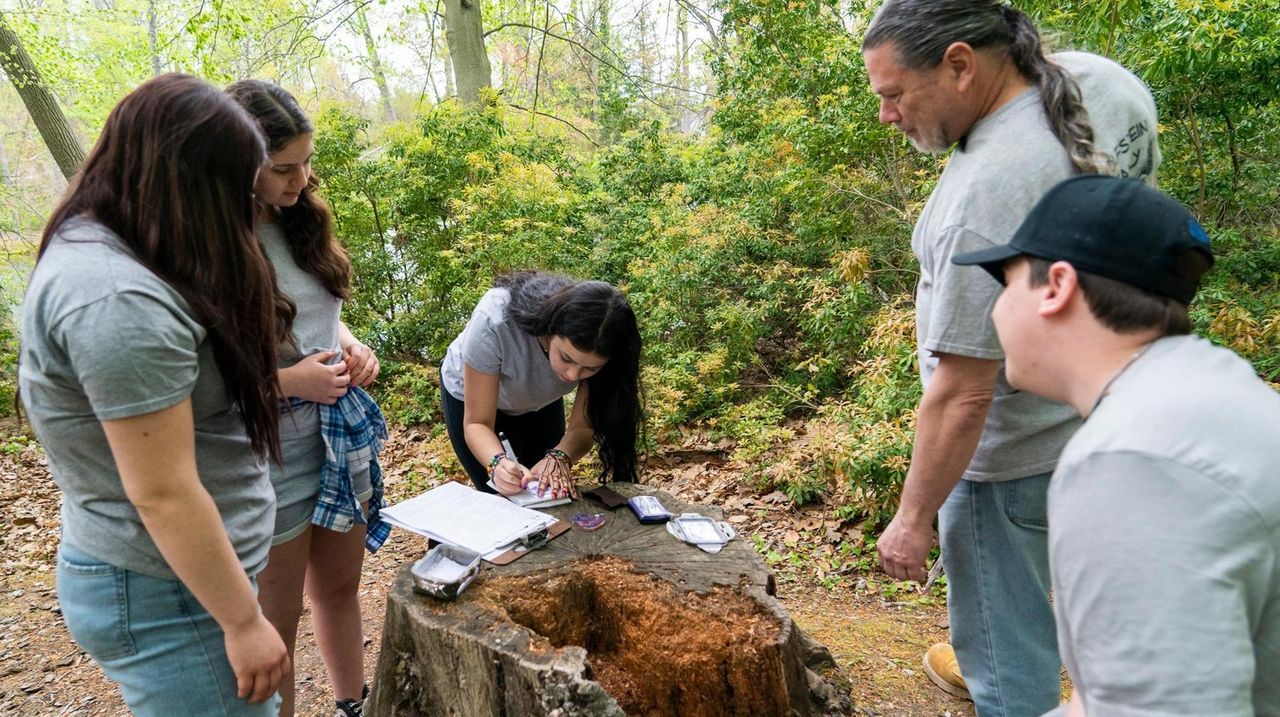 A family from Plainview, the Wolfsteins, spoke on Sunday about the hobby that turns an outing into a treasure hunt. Credit: Corey Sipkin

Need to perk up your pandemic walks? Try letterboxing — a hobby that turns an outing into a treasure hunt.

"It makes going on hikes fun," says Joanna Stolove, 42, a geriatric social worker from Great Neck whose son, Max, 11, got the family interested. "You follow the clues and it's sort of exciting because you never know where [boxes] are going to be hidden."

At the Bailey Arboretum in Locust Valley, for instance, 12 boxes are hidden in a "Harry Potter"-themed series. At Twin Lakes Preserve in Wantagh, the theme of an eight-box series is actually the COVID-19 pandemic. One box is hidden on the Long Island Maritime Museum grounds in West Sayville. "They’re everywhere," Stolove says.

Letterboxing is a bit like a scavenger hunt, or geocaching, enthusiasts say. Here’s how it works:

— Choose your trail name and get a signature stamp, an inkpad and a notebook. You can buy a stamp at a crafts store or carve your own. The Stoloves use the trail name Sto Family, and Max made a signature stamp that says "Sto" followed by a heart to symbolically represent Stolove.

— Visit a website called Atlas Quest, which lists letterbox locales on Long Island and across the country. Venues may have one box or a series modeled around a central theme. Follow the clues provided to find them.

— Inside each box will be a decorative stamp — which is different from a signature stamp — left by the creator. For instance, the "Harry Potter" series has one box with a stamp of a Quidditch broom, another with Hogwarts Castle, another with Hedwig the Owl. Use each to stamp your notepad, adding to your collection of decorative stamps, along the lines of a passport.

— Then, use your own signature stamp to the stamp the visitor logbook that will also be in their box; some people will also leave the date they were there and their hometown.

Jeanne Schnupp, a retired schoolteacher from Farmingville, got into letterboxing when she and a neighbor tired of walking their neighborhood side streets during the pandemic. The boxes are typically in parks, making it very easy to social distance. "I’ve been hooked ever since," says Schnupp, whose trail name is SavvySightseer and whose signature stamp features an airplane.

It’s not just boxes that are fun to discover, Schnupp says. The search brings fans to new places on Long Island they might have passed by but never explored. For instance, Schnupp enjoyed looking for boxes in Connetquot River State Park in Oakdale, a place she has passed many times on the highway. Schnupp also says she likes clues that incorporate history.

Letterboxing, which originated in England in the 1850s, is a serious hobby, fans say. Schnupp cautions new letterboxers to try not to be observed; boxes aren’t buried but they are tucked into trees or other outdoor nooks or camouflaged by rocks, sticks or leaves. "This is not a lark. Somebody put a lot of work into carving the stamp and planning where to put." It’s a shame when boxes go missing, she says.

One of Long Island’s most prolific letterboxers is Judy Isgro, a retired teacher’s aid from Wantagh, who goes by the trail name WeepingWillow52. "When we were sheltering in place, I had so much free time to do the carving. I carved over 100 stamps," she says.

One recent trail she created for others is called "Words We Won’t Soon Forget: Fighting the Coronavirus," and features eight boxes at Twin Lakes Park in Wantagh. Stamps including "Quarantine," "Social Distancing" and "Flatten the Curve."

"It was a big hit," Isgro says, awarded a blue diamond, which Atlas Quest gives to a highly rated series. Isgro is also responsible for the "Harry Potter" series. And she goes hunting for boxes herself.

Joanna Stolove made a series of boxes as a surprise for Max’s 11th birthday this March and posted it on Atlas Quest prior to his big day. Letterboxers who did that series at Kings Point Park in Great Neck stamped the visitor logbook and even left Max small presents. On his birthday, Joanna took him there to do the series himself and see who had been there before him.

"It was exciting," says Max, who says letterboxing is a great pastime for kids who like exploring outdoors. Plus, he adds, "It’s fun to stamp stamps."