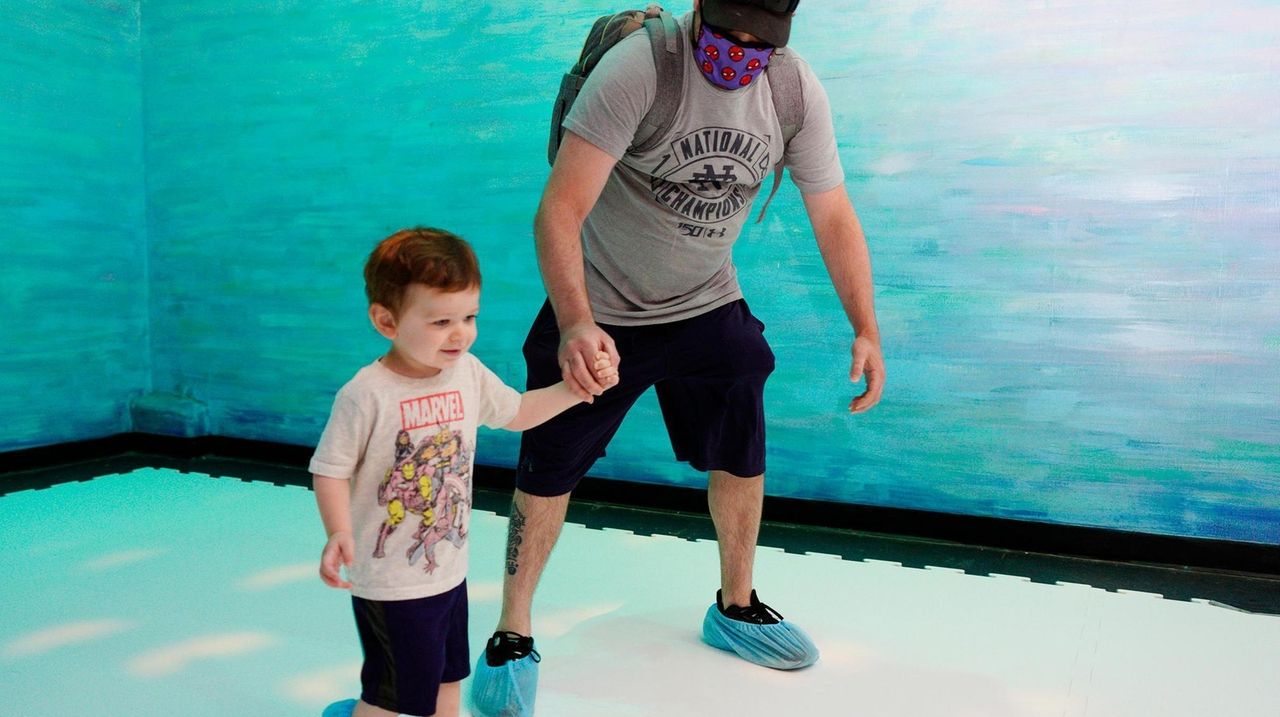 No need to lace up ice skates to go sliding and gliding across the rink at the newest indoor exhibit at the Long Island Children’s Museum — "Slip & Slide Sock Skating" lets kids jettison their shoes and "skate" in their socks.

Forgot socks? The museum has complimentary disposable booties that visitors can slide over their shoes before getting on the "ice."

The exhibit, free with museum admission and available through Sept. 8, aims to help families get in some exercise after a school year of extended screen time. "When we looked at putting something in for the summer, it was clear that we wanted something physical," says Maureen Mangan, director of communications and marketing.

Michelle McDonald, 38, a teacher from Rockville Centre, and her son, Kevin, 18 months, joined Mikaela McDonald, 5, on the rink. "My 5-year-old thought she was an ice skater. She was twirling, she put one leg up in the air like an ice skater. It was really sweet," McDonald says.

The surface isn’t super slippery, McDonald says. "There was just enough to move around and have a good slide, but not enough to fall. It got your blood pumping. I felt like a kid again," she says.

Every Friday, a free "Fitness Friday" workshop will be offered on the rink from 11:30 a.m. to noon to offer a new, simple workout to challenge visitors to move their bodies in a different way.

The 800-square-foot rink — about the size of a four-car garage — also features color light displays and festive music. Instead of ice, the rink is made from a high-tech synthetic polymer surface that lets users glide without blades. (Or runny noses and cold hands, the museum adds.)

If it’s a hit, the museum may bring the rink out again at other times of the year as a "pop-up" activity, including perhaps during the December holiday season. "This is the perfect time to test it out to see if we want to make the decision to have it at other times," Mangan says.

"My kids love it," says Natalie Viener, 36, a pop artist from Roslyn who takes her twins, Levi and Shira, 3, to the museum every week and says they always lead her directly to the rink. "It’s something cool and different."

In addition to the Slip & Slide exhibit, all museum exhibits have fully reopened at full capacity, including the Climb-It @ LICM climbing structure and the museum theater for shows. "Kids still have to wear masks because they are unvaccinated, and we’re asking their grown ups to wear masks as well so they can model the behavior we’re asking of kids," Mangan says.

WHEN | WHERE Through Sept. 8 at the Long Island Children’s Museum, 11 Davis Ave., Garden City

COST Free with museum admission of $14 per adult and child over 1 year old; $13 seniors