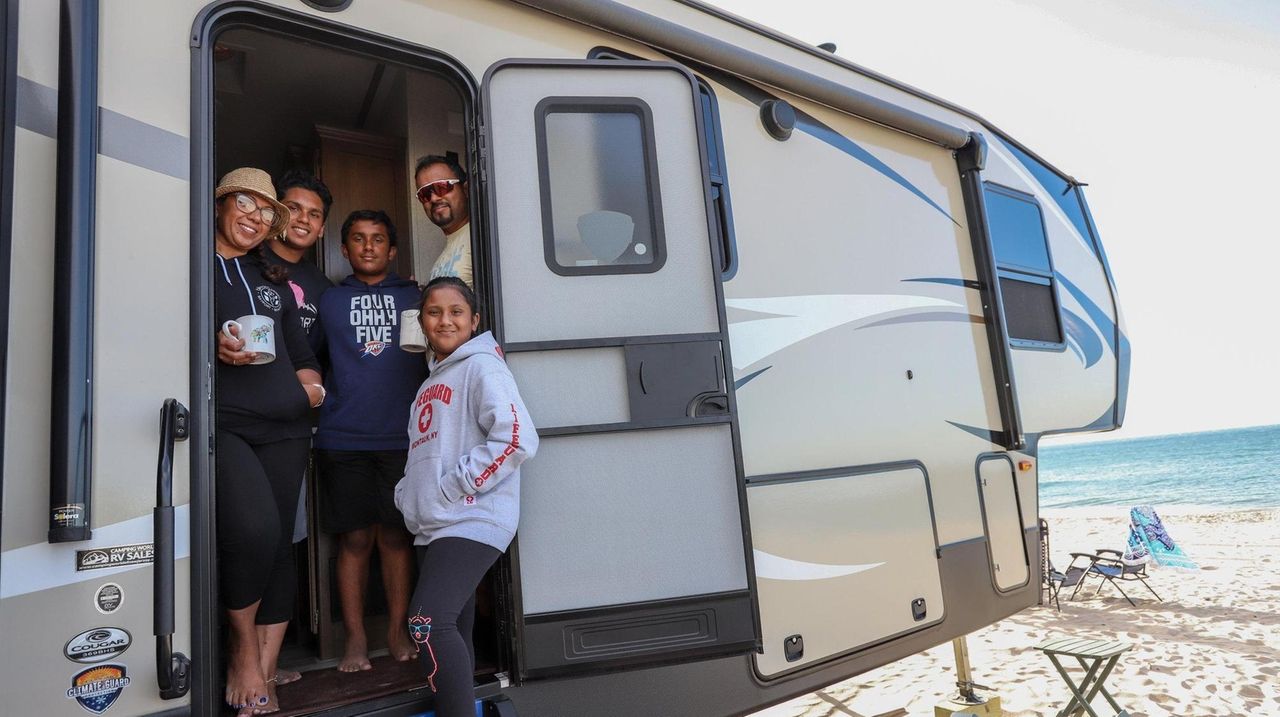 On June 15, the Hawaldar family of Bellport and the Knox family of Syosset talked about how easy it is to get started and how much fun it is to unplug. Credit: Linda Rosier

Ask Safeena Hawaldar to name one of the most relaxing weekends she’s ever had, and you might be surprised by the Bellport mom’s answer: It was the first time she took her family camping.

“We’re away from everything. The errands, the laundry, the phones, the TV,” says Hawaldar, 43, who does medical transcription. Since that first blissful weekend nine years ago, Hawaldar has become a frequent camper on Long Island’s East End. Her family includes husband Ray, 47, who is a foreman, sons Richie, 15, and Kevin, 12, and daughter, Carly, 8.

They favor taking their RV to Montauk County Park or Shinnecock East County Park in Southampton. If they’re in Montauk, the Hawaldars might also take the kids into town for ice cream, go hiking at Camp Hero or to visit the lighthouse, or go to hear live music at Gosman’s Dock.

HAVE TENT, WILL CAMP

Many families start their camping lives with tent camping before deciding whether to upgrade to a camper, trailer or recreational vehicle. Trent Knox, 44, who works for the Jericho Water District, and his wife, Janice, 42, who works for the Syosset School District, took their daughter, Mackenzie, 8, camping for the first time to Hither Hills State Park Campground in Montauk on Father’s Day weekend. They went with a group of other families from Syosset; they practiced sleeping in their tent in the backyard last year to get ready for the trip. Hither Hills has restrooms and showers, a general store and a playground, and is just over the dunes from the beach.

“It’s kind of an adventure,” Knox says of being a camping novice.

Tent camping is how Geraldine Ferraro, 61, of Kings Park, started out with her family at Smith Point County Park in Shirley in the 1980s, when her oldest son was just 3 months old. Fast forward more than 35 years, and Vincent Jr. of Setauket, now 37, joins in multigenerational camping with his parents, his wife and his own four children, 6, 4, and 18-month-old twins.

Long Island has more than a dozen and a half state, county and private campgrounds, some of which offer cabin rentals or luxury glamping. Most of the campgrounds are in Suffolk County, but they are open to nonresidents. Popular campsites can fill up quickly and can require reservations online or by phone months in advance.

“If you’re camping on Long Island, the greatest places are Suffolk County parks,” says Christopher Iarocci, 48, a truck driver from Patchogue who started tent camping on Long Island when his children were 2 and 8. “They’re relatively cheap and there are a lot of them.” Suffolk County rates for basic tent sites start as low as $14 per night for Suffolk residents with a Green Key or $29 for nonresidents. Cancellation policies vary based on when the cancellation is made.

Some Long Island campers like being in the woods; others like being on the beach. “We only camp at the wooded areas. The ocean just scares me,” says Jenny Minor, 44, of Smithtown, who camps at Sears Bellows, Indian Island and South Haven parks with her husband, Chuck, 50, a landscaper, and her sons, Riley, 12, and Christopher, 9. Her kids like to fish, and they’ve met friends at the campgrounds who they see on repeat visits, Minor says.

The go-to campground for the Ferraro family, on the other hand, is Smith Point. “I love the beach,” Ferraro says. She says the ice cream truck visits, and there’s free music at the beach pavilion. The Hawaldars also are “team beach.” The woods, Safeena Hawaldar says, “are super humid. There’s mosquitoes and bugs. It’s not my thing.”

There can be some drawbacks to camping: “If we know in advance it’s going to be a really rainy weekend, sometimes we cancel,” says Diane Cosgrove of Selden, who started with her family when her two children were preschoolers. “You do occasionally get somebody who is playing music too loud too late at night but those people are few and far between.”

- A tent, tarp for underneath tent, and tarp for over the tent in case of rain. “Most tents are waterproof, but you want to keep as much water off it as possible,” says Diane Cosgrove, 46, of Selden.

- Sleeping bags and air mattresses. “It can be difficult to sleep on the ground,” Cosgrove says.

- Cooler filled with ice (or frozen water bottles) and food. “You definitely want the best cooler money can guy, so your ice doesn’t melt and you lose your food,” Cosgrove says. She recommends preparing some foods in advance at home, such as pasta salads.

- Folding table and chairs to eat on.

- Pop-up gazebo to put over table in case of rain or bugs. “You don’t want to sit in your tent and eat,” says Christopher Iarocci, 48, a truck driver from Patchogue.

- Lantern for nighttime, and flashlights for when you need to walk to the bathroom at night.

- Backyard games and board games to keep kids (and grown-ups!) entertained. “Bring lots of things for the kids to do, games, things they can do outside,” Cosgrove says. “Sometimes my son, when he was little, he had a bug collection. He would go around with his little tweezers and collect some bugs. We do have a metal detector that we take on the beach sometimes. They like to see what they can discover in the sand.”

- Kids' bicycles (optional). The kids can ride around the campsites, Cosgrove says.

WHERE FAMILIES SHOULD CAMP

Many experienced campers suggest young families try Southaven County Park in Brookhaven, which offers fishing and rowboat rentals; Eastern Long Island Kampground, a private campground in Greenport, which has a store, a playground, a pool and fire truck rides and hayrides; Sears Bellows County Park in Hampton Bays, which has rowboats and is within walking distrance of downtown Hampton Bays; or Indian Island County Park in Riverhead which has fishing and a playground. “At Indian Island, you’re close to the water. You can walk down to the beach,” says Christopher Iarocci, 48, of Patchogue tent camps on Long Island with his children. “It’s on the Peconic Bay, which is good for little kids.”

24 ways to enjoy summer on LINo matter where you live on Long Island, there are vast resources for you to tap into for some fun. 14 fun things to do with kids on (or by) the water on LISurfing lessons, river cruises, fishing and more. 7 family-friendly waterfront restaurants on LIWaterfront dining on Long Island doesn't have to be a formal affair. There are plenty ...