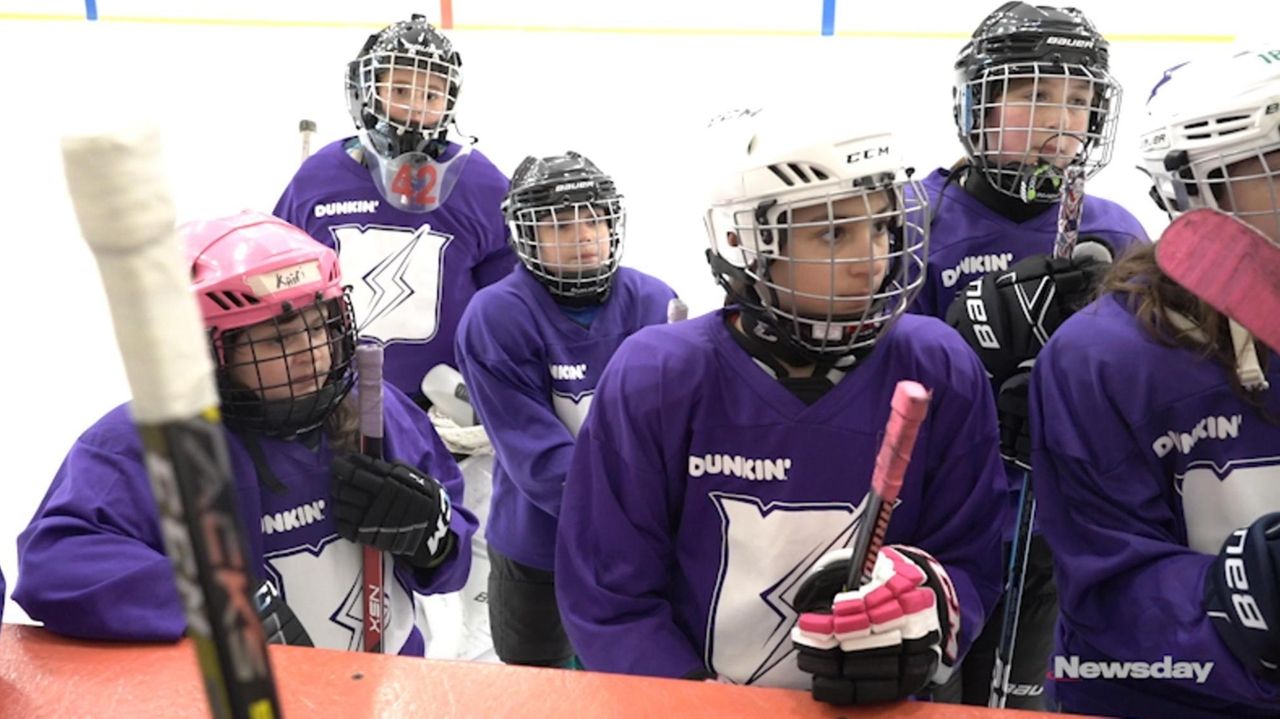 For Madelyn Luckman, 9, of Massapequa, skating down the ice after a hockey puck feels like flying.

And now, when she’s “flying,” Madelyn can focus on scoring, winning and having fun — something she says was tougher when she was playing in a coed league in which she was one of the only girls. “I feel no intimidation,” Madelyn says.

This fall, Madelyn signed up for a new hockey league for girls run by the New York Rangers; her team plays out of the Town of Huntington’s Dix Hills Ice Rink. The other three teams play out of the Long Beach Ice Arena, Long Island Sports Hub in Syosset, and the Lasker Ice Rink in Manhattan’s Central Park. The new league is an opportunity for Long Island girls to play on all-female recreational league teams that battle other teams locally; while many recreational youth hockey teams or ice-rink in-house league teams are coed, they wind up being made up of primarily boys, ice rink managers say.

“From a guy who is in the trenches and sees what goes on in the youth sports league, the girls don’t want to play with the boys,” says Dix Hills ice rink manager Matt Naples. “They don’t want to feel like an outcast. ‘You go get dressed in this locker room while the rest of the team dresses here.’ There are a lot of girls who come in the rink and watch their brothers play and you can see on their faces that they want to get in the rink and play.”

Various all-girl travel hockey teams exist on Long Island, but those teams generally require higher level play, a bigger expense to join and a willingness to travel upstate and to other states for games. “It’s a grueling, grueling schedule,” says Joe Brand, manager of the Long Beach Ice Arena, whose daughter has played competitive travel ice hockey. The New York Islanders also run a 10-year-old and younger all-girl development team out of the Northwell Health Ice Center in East Meadow, but it requires a $3,000 annual fee and is a feeder program for girls to advance to the older girls’ travel teams, says Alexis Moed, president of the New York Islanders Girls’ Elite Program.

The new Rangers league, in contrast, costs $395 per season, and it fills a niche of allowing girls to play together without the pressure, nor the devotion of time and expense — making it more accessible to more people, Brand and Naples say. “We don’t want to have to have a family choose between a vacation for their family and a kid to play hockey,” says Kristin Bernert, executive vice president of Sports Operations for the Madison Square Garden Company, which owns the Rangers. “Just like basketball or softball or soccer or field hockey or any other sport out there, this is a chance for girls to play.”

The teams have one practice clinic and one game each week; most members are between ages 11 and 14 and not all have hockey experience. “We’re still working on all the rules,” says Melissa Mirra, coach of the 18-member Dix Hills team. Practices include skating drills such as jumping over hockey sticks, says Kathy Griswold, coach of the Syosset team. Says Harper Sanderson, coach of the Long Beach team, which calls itself the Pink Donuts: “We’ve really been working on stopping and accelerating and going backwards. They’re super enthusiastic.”

Diana Cardenas, 14, a ninth-grader from Smithtown, didn’t even know how to skate when she started. Now she’s playing forward for the Syosset team. “Hockey is just so fun,” she says. “You get to be aggressive and you get to go fast.” Bethany Vollaro, 14, of Wantagh, played girls travel hockey previously, but switched to the Junior Rangers league because she also does theater and wanted something less demanding in case she had to miss practice for a dress rehearsal, for instance. "It's flexible," she says of the Rangers option.

‘JUMPED AT THE CHANCE’

Melissa Luckman, Madelyn's mom, says that when she heard about the new girls’ league, she “jumped at the chance” to register the fourth-grader. “It’s a way to be competitive but with low pressure so they can actually learn the game,” Luckman says. “We weren’t ready to make the travel commitment and we didn’t think her level of play was ready for travel. We like how much teaching goes on in the Junior Rangers program.”

Madelyn’s dad, Don, says he’s seen his daughter’s confidence soar. “I watched Madelyn play with the boys’ league. One of the things that was most discouraging was she would be on the ice, but she would back away. She was intimidated by the aggressiveness and the size of a lot of the boys. I’ve seen a difference in the competitiveness,” he says.

“I feel like all girls should try it,” Madelyn says of ice hockey. “Even if they’re a little scared, I want them to learn how to play.”

New session starts mid-January; cost is $395 per season and includes 10 games and 10 practices. Girls also need equipment; Pure Hockey offers a bundle of shin guards, pants, skates, shoulder pads, elbow pads and a helmet for $180. The program also offers free loaner equipment on request that players can return at the end of the season; every girl also gets a hockey stick to keep.