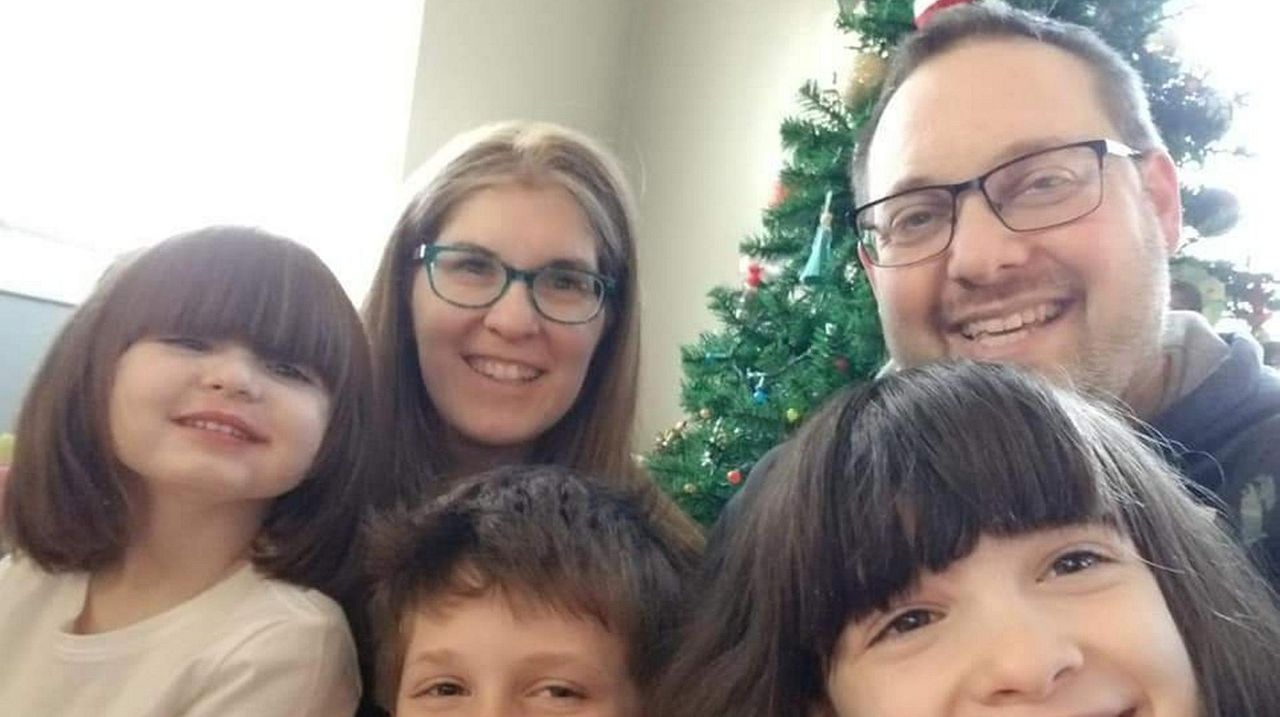 Dana and Scott Krupnick, both 38, of Centereach, have twins Reed and Summer, 9, in fourth grade and a daughter, Peyton, who is 4. Dana Krupnick takes us through a chaotic day at home, juggling home schooling, activities and more. Credit: Krupnick family

It was the moment when Angela Guinan of Lindenhurst heard herself arguing with her almost 4-year-old son because he was refusing to finish his preschool assignment to draw four apples on a tree that she decided they were done with the pressure of distance learning, at least temporarily.

“Now, we’re both crying. Why? Because you don’t want to draw apples? We’re not doing this today,” Guinan, 39, says she decided.

For Melinda Long, 43, of Huntington Station, who has three children in fifth, seventh and ninth grade, that moment came this past week. One child couldn’t remember what time she had a school meeting, and another didn’t know why he got a 75 on an assignment.

“The kids are starting to crack,” Long says. “The last couple of days we’ve chosen to take a break from it and get outside. Yesterday, we went to the beach. Today, we went on a hike. I have to think of the mental health of my children before education. The kids started to feel caged. We all did.”

Lockdown fatigue is real, say parents as Long Island enters its third month of social distancing. And it’s not just the kids who are burned out, it’s mom and dad as well. Some days are great, the family time is a joy, parents say. But other days? Well, not so much. It’s the laundry, and the cooking, and the sibling squabbling; the lack of outside help, and the need to keep working remotely.

It’s not that these parents aren’t grateful that their families are safe, and that those of them who still have jobs have a paycheck coming in. Still, they say the added demands have been draining.

As a Dix Hills psychologist with four kids, Elana Rimler can relate to what she’s hearing from families she counsels. “They’re incredibly overwhelmed,” she says.

“Do I feel like venting? Every day,” says Sharon Zink, 51, of Huntington, a preschool teacher with two teenagers. She’s still teaching online, and her husband still goes to work in Manhattan. “It’s all been really hard, to be honest. It really came to a head in the last couple of weeks. I’m just exhausted.”

Even parents who normally home-school their children or are stay-at-home moms say this period is taxing them. Danielle Miller, 32, of East Patchogue, who home-schools her 10-year-old fourth grader and a 4-year-old, says typically, they would be visiting museums or gathering with other families who home-school for social interaction. “This is not what home schooling looks or feels like,” Miller says. “This is pandemic schooling, as I like to call it.”

Guinan is a stay-at-home mom who says she didn’t think the lockdown would be so hard because she’s usually home with the kids. “But I’m not home with them all day,” she says. “We’re at swimming. We go to a museum. We run errands. This is a lot harder when there’s nowhere to go.”

Now, she feels like all she does is say "no" to her son Trey, who turns 4 next month, and daughter Abby, 2. Guinan says she finds herself crying. “There were less hard days in the beginning than there are now,” she says. “There are still more good days than bad. But the hard days are hard.”

Guinan says that the same activities day after day have gotten boring for the children; playing with the same toys, running around in the same backyard. “There’s nobody else there. There’s nothing interesting to see. It’s the same stuff that was there yesterday.”

Talonda Thomas, 36, of West Hempstead, is a single mom to Julien, 11, a sixth grader, and Malachi, 19, a college freshman. She says the pressure is on — even for the parents of older children.

Malachi is trying to do his singing lessons online in the basement and take dance classes in their backyard. Thomas is the music chairperson at Elmont Memorial High School and is teaching classes to seventh and eighth graders online as well as running the lessons given by her private New York Musician Center in Bellmore on Zoom. "I have been completely overwhelmed by it," Thomas says. "I keep my phone on mute not to constantly feel frantic. It's hard to get things done otherwise."

Some parents have even chosen to temporarily leave their jobs to balance the at-home workload.

Beth Silverstein-Vieira, 39, of Melville, made the choice of furloughing herself from her job as a neurologist so that she could focus on caring for her three children, ages 6, 4 and 1. “My baby just started walking. You need a million eyes all over the place,” she says. Silverstein-Vieira’s in-laws used to help watch the children, but now they are isolating. “It’s 24 hours and there’s no outside help. It’s very chaotic.”

Silverstein-Vieira and other parents interviewed say they feel like, for their families, much of the added responsibilities at home fall on the moms. “I think it’s taken a different toll on them,” she says. Her husband, Evan, 37, a podiatrist who also was off for the past eight weeks and just returned to work, agrees. “My wife has definitely been the rock who held us together through this whole thing,” he says.

It's 'too long to be all together'

But dads have their challenges, too. Long says her husband, Damon, 44, is working from home as a mortgage loan officer, and his office is close to the kitchen and the living room. “There’s a lot of noise in the background, two dogs barking,” she says. "My husband needs a break from us. It's nice for him to have a little bit of quiet."

Damon does appreciate that, he says. "The first couple of weeks was fine. It just gets to be too long to be all together in one house 24 hours straight," he says.

Guinan’s husband, Tom, 44, who works in compliance and finance, has set up shop in their attic. On weekends, Guinan says she would love a break from the child care but feels guilty taking some time for herself. “It’s not like he’s on vacation five days a week,” she says. “He works, too. I can’t just abandon him with the kids even though he’s perfectly capable.”

Still, taking time to yourself to recharge is important. “I think the best part of the day is at night," says Dana Krupnick, 38, of Centereach, the mother of twins Reed and Summer, 9, and Peyton, 4. "At 8:30, they go to bed. Then I stay up until midnight just to veg out."

Tips for managing the stress