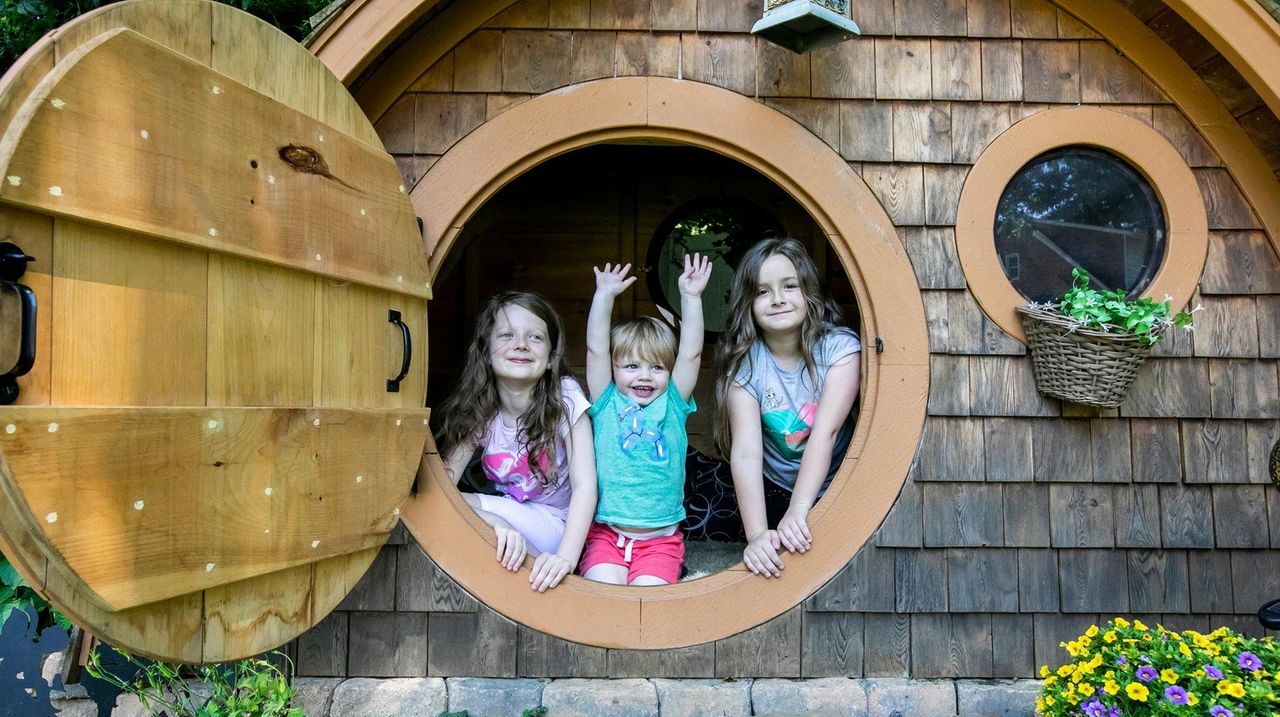 MaryEllen Shea of Stony Brook made a "Hobbit House” for her grandchildrenfrom Maine-based Wooden Wonders. Shea then placed fairy lights all over the house, which the kids believed were actual fairies when they were younger.  Credit: Marisol Díaz-Gordon

The cedar playhouse in Susan Lopez’s Glen Cove backyard has gotten pretty fancy — ever since, that is, the 35-year-old stay-at-home mother painted the door red, added rainbows to the floor, ladder and ceiling, and covered everything with glitter.

The playhouse, which she purchased from Walmart, will eventually be airbrushed with her children’s names — Skyla, 5, Savannah, 2, Lucas, 1 — as well as some of their favorite things, including Mickey and Minnie Mouse, cars, unicorns and, of course, rainbows.

Lopez says she was looking to create “something that they’ll enjoy so that they’re like, ‘Oh, my God, I get to go to my rainbow house.’ ”

Playhouses are often prefabricated wooden or plastic structures that children undoubtedly tire of before long. But with a little paint, some elbow grease and lots of imagination, Long Island parents like Lopez are turning their backyards into magical tableaux for their children.

To give her Wood Kingdom playset's tree house personality and pizzazz, Christine Donohue, 44, a school secretary from Massapequa, incorporated various items she had around the house. “We hung some old dining room curtains on tension rods, threw some stuffed animals and some pillows up there, added a beaded curtain and a chair. Now she plays with it all the time,” Donohue says of her daughter, Shannon, 8.

The only other major purchase was a Sky chair that hangs in place of a tire swing that came with the playset.

Inspired by photos of playhouses she saw on Instagram, Hilary Elmaleh, 34, a pharmaceutical sales representative from Northport, disassembled, power washed and spray-painted a used plastic Little Tikes playhouse in colors her kids picked out, then added a bell on the door and fake flowers in the flower boxes. Her kids, Luca, 12, Beau, 3, and Eloise, 2, play in it all the time, often opting to have their breakfast there.

“Their favorite thing ever to do is ring the bell,” says Elmaleh. “There’s also a fake mailbox. They love to pretend they’re sliding mail in it and ring the bill.”

To rehab her family's cedar playhouse, Alexandra Calame, 31, a Garden City interior designer and lifestyle blogger, painted it white, with a  pale blue Dutch door and black roof. She added Adirondack chairs with cushions, a wreath similar to the one on their real house and a picket fence with a mailbox attached, she says.

“When it’s nice out, they spend the whole afternoon in the backyard,” Calame says of Addison, 4, and Eleanor, 2. At 9 months old, Scarlett, her youngest, has not yet discovered the wonders of the playhouse, where Calame keeps a bin filled with plastic food and other playthings for make-believe fun.

Sofia Cimino, 3, spends lots of time in her Step 2 brand plastic playhouse, which is under an apple tree surrounded by marigolds, impatiens, paving stones and a white picket fence. A garden gnome stands nearby. Sofia “helped plant everything with her little garden set,” says her mother, Morgan Fox-Cimino, 39, a stay-at-home mother from East Northport, adding that her daughter had also helped pick everything out. “It was something for us to do together and for her to take care of.”

In Nicole Froelich’s case, a former dog run in her side yard of her Ronkonkoma home turned out to be the perfect place for a secret garden hidden by butterfly bushes. Froelich, 37, has lots of other play equipment on the property, including a stage, a trampoline, a swing set, a barn and a greenhouse for the kids. She runs a day care center out of her home. But, she says, she wanted a private space just for her sons, Michael, 7, and Anthony, 2.

Now, a wrought-iron bridge with butterfly designs spans a “stream” made from blue rubber mulch. Just beyond is a checkerboard made from stone blocks and sod. Rocks painted to resemble ladybugs and bumblebees are dotted throughout the secret garden.

Stay-at-home mother Alyssa Carbone, 28, says she enjoys watching Kylie, 4, and Skylar, 1, play in the "mud kitchen" behind their Levittown home. Carbone’s father, Kenneth Mariana, built the kitchen out of wood pallets he had lying around and added a plastic tub to resemble a sink, a counter to work on and hooks to hang cooking utensils. Carbone keeps a mud-filled bin, pans, muffin tins, bowls, plates and cups next to the kitchen.

“She likes to play waitress, so she’ll take my order,” says Carbone of Kylie. Sklyar is just starting to play there, and can frequently be found exploring the texture and feel of the mud as she places it into cups.

In Stony Brook, MaryEllen Shea, a 64-year-old retiree, stained and painted a cedar playhouse with a rounded roof and door from Maine-based Wooden Wonders, for which she paid $2,300, for her grandchildren. She placed what they call "the Hobbit house" under a tree, surrounded it with stones, added miniature antique wicker chairs and lanterns, a sheepskin rug and pillows. Behind the structure, they created a secret garden. A slate path leads grandchildren Penelope, 7, Sophia, 7, and Jackson, 2, to the playhouse.

Shea placed fairy lights all over the house, which the kids believed were actual fairies when they were younger, says daughter Kristin Ryan Shea, 37, director of the Ward Melville Educational and Cultural Center. “She instilled a pretty intense sense of wonder in them and they’re very creative children,” says Kristin, adding, “In our day and age, that wonder escapes a lot of kids. It’s a really nice thing to have.”

HOW MUCH THEY SPENT

-Susan Lopez spent about $60 for paint and glitter for the playhouse, which originally cost about $600.

-The mulch, arbor and bridge set Nicole Froelich back about $400.

-Upcycling the Donohues’ playset treehouse, which cost more than $5,000 with installation, meant buying a Sky swing chair for $120.

-Hilary Elmaleh’s used playhouse cost $40, and materials were an additional $30 to $40.