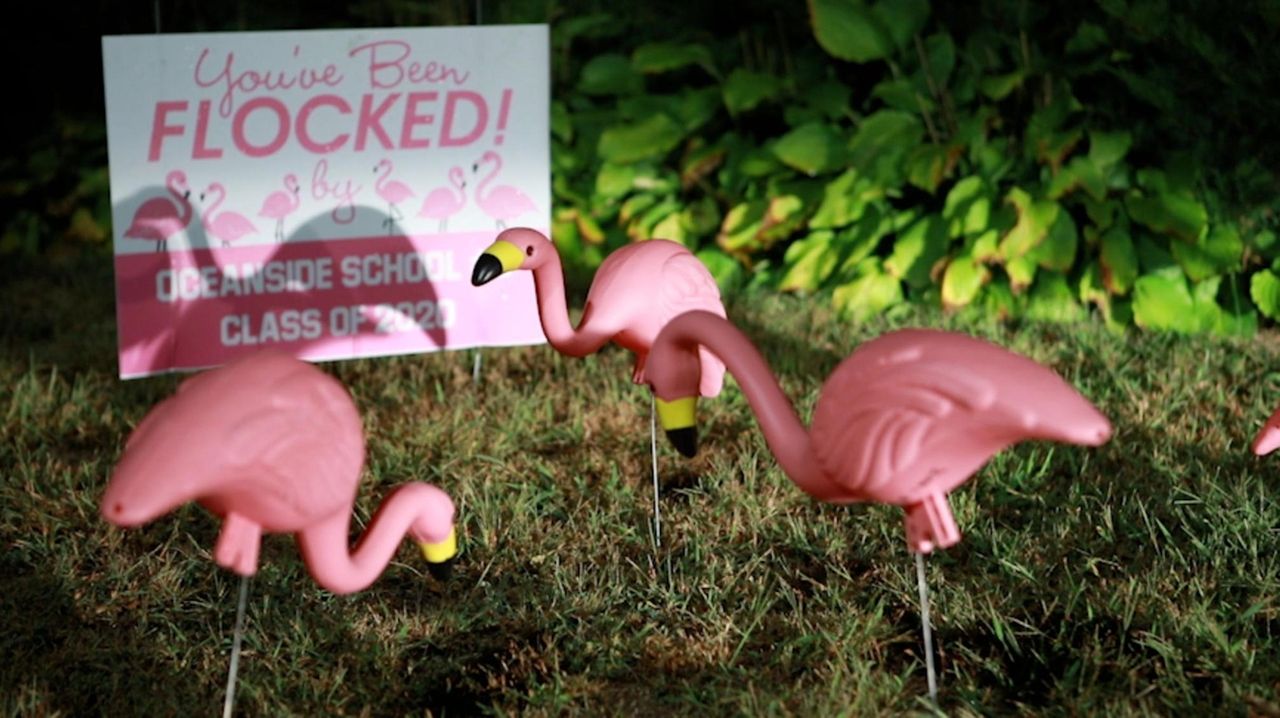 Elementary schools in the Oceanside School District have created a flighty fundraiser, for a $20 contribution anybody can have a friend or family member be surprised by a flock of a dozen plastic pink flamingos mysteriously appearing on their front lawn for 24 hours.  Credit: Newsday / Shelby Knowles

Pink flamingos on your front lawn? A pie in the principal’s face on Pi Day? A chance to opt out of fundraising campaigns guilt-free? Some schools on Long Island have gone beyond the bake sale to come up with creative fundraisers. Here are five examples:

Elementary schools in the Oceanside School District have created a flighty fundraiser — for a $20 contribution, anybody can have a friend or family member be surprised by a flock of a dozen plastic pink flamingos mysteriously appearing on their front lawn for 24 hours. “It’s so unexpected to see these crazy flamingos all over your lawn. It was so much fun, such a nice surprise,” says recipient Fran Perpero, 48, a marketing director whose daughter, Sophia, 11, is a sixth grader at Oceanside School 5. “My daughter was all excited. She was jumping up and down taking pictures.” The money raised goes toward the sixth grade’s annual overnight trip upstate, says Amy de la Teja, a parent running the fundraiser at School 5. That school picked up the idea after School 3 launched it; School 8 has also now jumped on the bandwagon. Teams of parent volunteers “flock” two houses per evening Sundays through Thursdays, leaving a sign that informs the homeowner, “You’ve been flocked!” with the name of the school. The following evening, they collect the birds and transport them to their next location. Think a dozen flamingos isn’t enough? For $30, the teams will leave two dozen birds.

At East Lake Elementary School in the Massapequa, students are literally paying it forward. For the first time this year, the school is trying a fundraiser using an online platform called Raise Craze, which has the tagline “Fundraising Through Kindness,” says Danielle Ocuto, a parent who is organizing the effort. “When the program is kicked off, students are encouraged to create a page for themselves on the site,” Ocuto says. There they will described three acts of kindness they intend to carry out, and designated family and friends will receive an email asking if they would like to respond to the children’s kindness by helping them out with a donation to their school, Ocuto says. The PTA gets 90 percent of each donation during the Nov. 4 to Nov. 15 campaign, Ocuto says. Daniella Pedote, 9, an East Lake fourth grader, is already cooking up her potential acts. “I would play with someone who is alone; I would let someone go in front of me in line at the grocery store; I would bake for the Ronald McDonald House for sick kids,” Daniella says.

March 14 is Pi Day, celebrated on 3/14 each year because 3.14 are the first three digits of the mathematical constant that every schoolchild learns. But Pi has more than 31 million digits after its decimal point — and at Dawnwood Middle School in Centereach, the Junior National Honor Society combines an educational pursuit with a fundraiser. Sixth, seventh and eighth graders compete in an after-school faceoff to be the one to recite the most numbers of pi, paying $1 each for the chance, says Leah Fitzpatrick, PTA president. “Every year there’s these kids who are so amazing,” Fitzpatrick says. “One student memorized like 57 numbers, which kind of blew my mind.” Each student who participates gets to "pie a teacher" with a whipped cream pie; the winner gets bragging rights as well as the opportunity to throw a pie at the principal, who is dressed in a garbage bag and goggles, with a much larger pie with a cherry on top, Fitzpatrick says. The students who participate are then given a pizza “pie” party.

In the Plainview-Old Bethpage School District, several elementary schools are addressing the need to be cognizant of children’s allergies, the desire of students to celebrate their birthdays in the classroom, and a chance to raise money for the PTA in one fell swoop with the Birthday Box. At Judy Jacobs Parkway Elementary School in Plainview, for instance, parents can pay $25 and order a bin delivered to the classroom that includes approved snacks such as Oreos or Pirate’s Booty for all, waters, and a certificate and pencil for the birthday child, says Kara Kaplan, PTA co-president at the school. “It’s been a great fundraiser for our school,” says Kaplan, who placed her own order for her daughter Emma's third grade class when Emma turned 8 this September. “It’s a convenience for the parents, it’s all kind of done for them.”

Sometimes you just don’t want to participate in the drive for cash. Nichol Vanore, PTA co-president at Eugene Auer Memorial Elementary School in Lake Grove, says her anti-fundraiser has been a hit. Parents are bombarded with requests each fall (not only from schools but from sports teams and other extra-curriculars) to sell wrapping paper, bake cookies and such. So Vanore sent home a lighthearted flyer offering parents the opportunity to opt out of fundraising by writing a check for $25, $50 or an amount of their choice. “It’s what parents really do feel on the inside. They wish they could just write one check and people would leave them alone,” says Vanore. “You only need so many tchotchkes, and everyone buys their wrapping paper in the dollar store.” After spotting a similar fundraising flyer on a Facebook site, she revamped it and sent it home. “We were shocked that the first time we sent it out, we raised $1,800,” Vanore says. “It really came out of me seeing a jokey thing on Facebook. I thought, ‘I’m going to give everybody a way to be guilt-free for the rest of the school year.’”